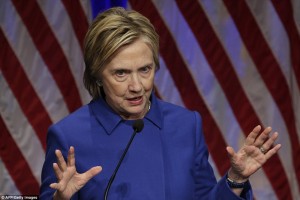 Perhaps, it is a bit petty and sexist to pick on her looks. I’m not really thinking about that.

I’m thinking about the immense effort and expense it took the Hillary campaign to make her look like something she isn’t; to make her look more attractive, more presentable, more relatable. And how the façade was utterly dropped the moment the campaign was over.

What I’m saying is, there’s a metaphor in there somewhere.