Democrats, then… going nanners about the prospect of Donald Trump not accepting the election results.

“When you try to sow the seeds of doubt in people’s minds about our elections, that undermines our democracy,” President Obama said. “You’re doing the work of our adversaries for them.”

The Democratic nominee could still snatch the US Presidency away from Donald Trump after being told to demand a recount in Wisconsin, Michigan and Pennsylvania by election lawyers and computer scientists in the latest twist to the Presidential race.

At least six Democratic electors have signed an agreement to try to block Donald Trump from securing the presidency with 270 Electoral College votes.

All of a sudden, contesting the results of an election doesn’t “undermine our democracy” or “do the work of our adversaries.”

Gee, I wonder what changed? 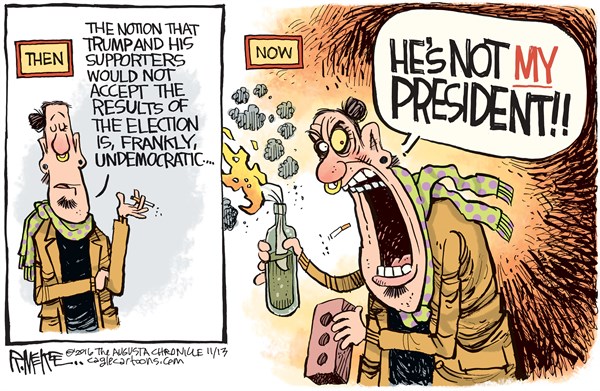 Speaking of things that have changed since the election, the MFM is making much of Trump kinda-sorta backtracking on prosecuting the Felonious Grandma, and global warming, and deportations. Meh, I think as conservatives, we are accustomed to being disappointed in Republican presidents and horrified by Democrat ones.

At least the Felonious Grandma won’t be packing the Supreme Court with Sotomayors and Bader Ginsburgs.