Corrupt, out-of-touch, San Francisco leftist Nancy Pelosi will continue to be the botoxed face of the Democrat Party. Which means the Democrats will continue to obsess over transgender bathrooms and appeasing the radical #BlackLivesMatter and #NotMyPresident left while dismissing the economic struggles of the middle class.

This should help keep the House in Republican hands for a couple more cycles. 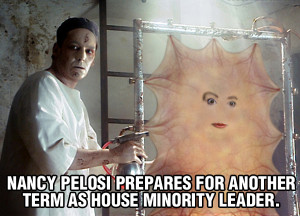