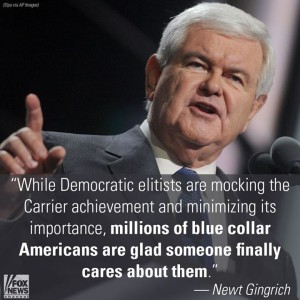 I’ve been reading a lot of discussion in comment threads about the Trump-Pence deal that saved 1,000 manufacturing jobs at the Carrier Air Conditioning manufacturing plant in Indiana. A lot of people are attacking the tax relief as “crony capitalism,” (even those who were perfectly fine with the billions Obama pumped into crony green energy companies like Solyndra) while others praise that it’s the first small step in Trump’s program to “Make America Great Again.” I side more toward the latter camp. Carrier is a small PR win that can be leveraged into a broader program of tax and regulatory form that will be good for the economy. I hope that’s what Trump is planning.

If you remember, Obama mocked the idea that the 1,400  job the Carrier Air Conditioning jobs could ever be saved. He would have chosen instead to fall back on the “job training” and more welfare. Handouts and Government spending are the lazy man’s solution. Job training programs are not very effective, but they keep left-wing bureaucrats employed. The view of the left is too often, “Oh, you didn’t want those icky manufacturing jobs anyway, We’ll train you to polish windmills and coordinate safe spaces.”  Or, as they call them, “The jobs of tomorrow.”