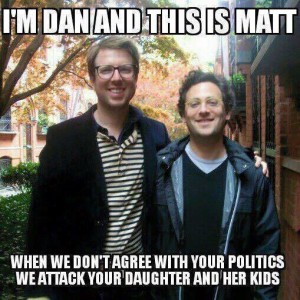 An obnoxious gay dude was reportedly kicked off a JetBlue flight after he spotted Ivanka Trump on the same flight and decided to be a douchebag.

According to TMZ, the passenger shouted, “Your father is ruining the country.” And as he was being escorted off the flight, he screamed, “You’re kicking me off for expressing my opinion?!!”

Ivanka was seated with her husband and pre-school age children at the time the angry gay guy was shrieking at her. The husband of the guy who went off on Ivanka tweeted the incident:

Ivanka and Jared at JFK T5, flying commercial. My husband chasing them down to harass them. #banalityofevil

Then, he changes his story

Ivanka and Jared on our flight. My husband expressed displeasure in a calm tone, JetBlue staff overheard, and they kicked us off the plane.

Whatever, you sad, pathetic Drama Queen.