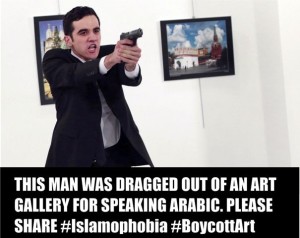 The guy who got kicked off a Delta Airlines flight (spawning MFM news coverage, leftist outrage, and boycotts)… that was fake. (Note: The gay left is, as usual, siding with the Mohammedans.)

The black church in Mississippi that was supposedly torched by racist Trump supporters (spawning MFM news coverage, leftist outrage, and boycotts) … that was fake.

The 20 Republican rogue electors hyped by the MFM who were going to defect from Trump and make the Electoral College all higgledy-piggledy turned out to be two. (Five defected from Hillary.)

Update: I hadn’t heard about this one, it was at AoSHQ: “Jewish family forced to flee after Breitbart and Fox falsely reported they got a school’s Christmas pageant cancelled” – Completely fake story.

It sure is a good thing Facebook is teaming up with Snopes to protect us poor, stupid deplorables from all the fake news that’s out there. Oh, wait…