Somebody made a nice little meme, appealing to people to not let political differences destroy their interpersonal relationships. 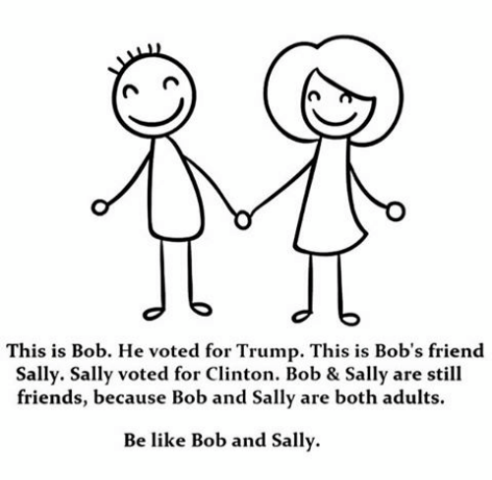 To which the left responded, “No! No! No! You can’t make us grow up! We want to stay angry, bitter, and unhinged!” (And also, violently disrupt the peaceful transition of power.) And you really would like to believe that the meme-tantrum below the jump represents just a fraction of the unhinged fringe of the left; but then you remember you have elected Democrat members of Congress calling Trump illegitimate; you have a former Democrat governor calling Trump a “fascist,” you have anti-Trump derangement throughout the mainstream media and the celebrity left. You have a broadly believed insane conspiracy theory that the FBI and the Russian Government conspired to elect Trump. And the very, very few people on the left saying, “Come on, knock it off, you guys,” are being attacked and vilified.