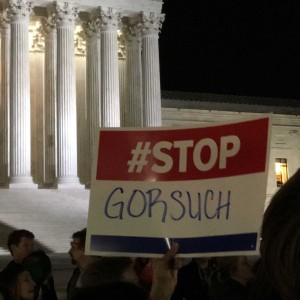 The Professional Paid Progressive Protest Performers (P5s) were on the streets within minutes of President Trump’s announcement that the eminently qualified Neil Gorsuch was his selection for the Supreme Court vacancy.  Some of them with professionally pre-printed signs; a fill-in-the-blank protest from professional agitators, prepared to perform for the camera in response to anything Trump says or does.

Anyway, Gorsuch seems like a solid pick. Confirmed unanimously by the senate, praised even by Obama appointees, and a guaranteed minimum 60 IQ points higher than Sonia Sotomayor. There is no sane reason not to confirm him. Key word being “sane.”

At least, this time, no one got their head bashed in at the protest.