The Democrats are eager to harness the #BlackLivesMatter movement to till the fields of social justice and pick the bright fluffy cotton of electoral participation. The Leaders of the Democrat Party are even inviting some of them to serve inside the house, as it were, with positions of leadership and influence within the party. #BlackLivesMatter leaders got to advise President Obama. They were paraded on stage at the 2016 DNC Convention.  No one aspiring to be chairhumanoid of the Democrat Party can say anything but “wonderful” about the #BlackLivesMatter movement.

Here’s what one of the leaders of the #BlackLivesMatter movement had to say about white people.

“Whiteness is not humxness, in fact, white skin is sub-humxn,” she wrote. “All phenotypes exist within the black family and white ppl are a genetic defect of blackness.”

Khogali then proclaimed: “White ppl are recessive genetic defects. This is factual.”

Raising the question, do they know about Shaun King?

The delightful people of #BlackLivesMatter have been joined in fomenting urban unrest by the ‘Antifa’ movement, which supports the exact same economic policies as Bernie Sanders and on whose behalf Senate Democrats are voting in lockstep against every Trump nominee. They also have some delightful people in leadership positions.  And they have also been plastering Seattle with the poster below. 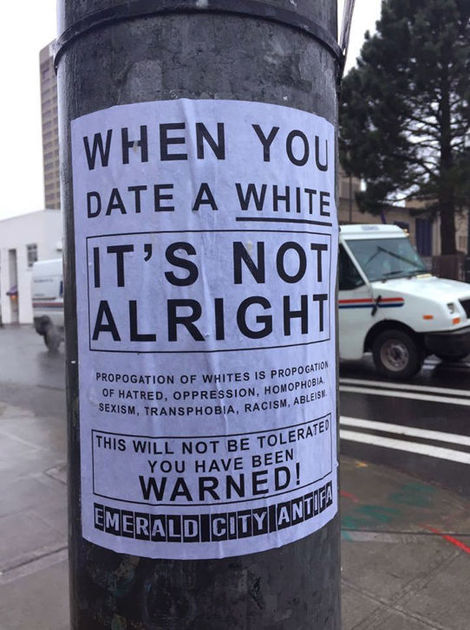 There may be a few people on the Democrat left who do not like that their party is being taken over by the violent, racist, and stupid. But, so far, they’ve confined their expressions of concern to comments on right-wing blogs.