The Democrats have turned the Neil Gorsuch confirmation hearings into a clown show. It’s a foregone conclusion that none of these idiots are going to vote to confirm. So, they devoted their entire time giving long pontifications followed by what they thought were ‘Gotcha’ questions (prepared by their staffs) that tended to blow up in their aging, decrepit faces.

But the two biggest clowns were the distinguished senators from Minnesota. WTF is wrong with Minnesota? SRSLY. The state inflicted us with both Jesse Ventura and Al Franken. Do the long winters freeze their synapses or something? Stewart Smalley – already posturing to the Democrats’ stupid, angry, and ill-informed base for his 2020 presidential run – asked several stupid, angry, ill-informed questions, including an assertion (not so much a question) that he personally had a “very different Constitution” than the one that Governs our (former) Republic.

But Franken’s co-senator Amy Klobuchar — a dingbat on her very best day — managed to outclown even Al Franken (an achievement in itself). 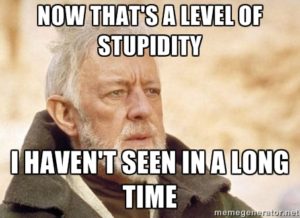 Who does she employ on her senate staff to write these questions? That sounds like something a high school sophomore girl would come up with.

And, of course, the Democrat-Media Complex dutifully report the Preferred Narrative that Gorsuch got a “Tough Grilling” in the Confirmation Hearings.