Republicans won a special election in Kansas on Thursday for an open house seat; but the Democrats were eager to hand “Trump’s Party” a defeat and spent a lot of time and effort on the race. (See also,  Georgia’s 6th district, where the Democrats have a much better shot because the Republican vote will be split among a vanload of challengers).

One thing that strikes me is how carefully they crafted the image of their challenger. In campaign photos, he is depicted as unshaven, casually dressed with a baseball cap. You can see the consultants choosing this look … “So those Joe Sixpack, bitter clinger types will think he’s one of their own.” But still, the choice of eyewear communicates to Democrats, “It’s OK to vote for him, because he’s smart.” 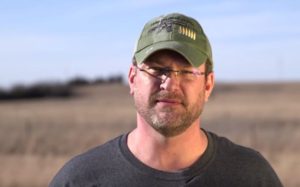