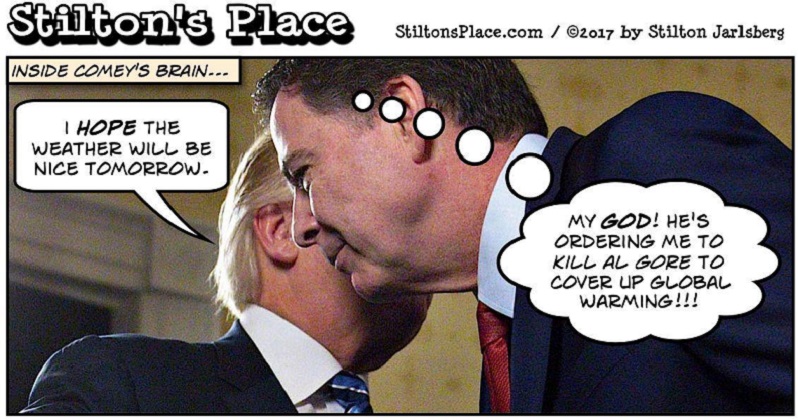 Jim Comey claims he can read Trump’s mind, and that when Trump said “I hope we can put this episode behind us,” he was obstructing an investigation (which, in accordance with 18 USC would have required him to immediately report his suspicions to the Attorney General; not to leak them several weeks later to the media through “a friend” but anyway) but he couldn’t discern any suspicious behavior in Hillary deleting 30,000 emails during an investigation, wiping a serve with BleachBit, and physically smashing Blackberry devices with a hammer. Nope, nothing suspicious there.

On a semi-related note, how many of you guys have ever actually seen Vladimir Putin in action? In this video, he deftly parries a hapless, in-over-her-head MeAgain Kelly as he effortlessly deflects her accusations of interference with the American election, and then schools her on world affairs while she can only pout and make Serious Journalist Faces.  He runs rings around poor MeAgain, just as he ran rings around President Dogmuncher for eight years. Watching him is like watching a brilliant quarterback playing for a team you really hate. You don’t have to like him, or support what he stands for, to recognize that he’s a canny and effective political force.