Aly Raisman found herself in an uncomfortable situation during Wednesday night’s NHL Awards when an aging hockey great made a leering comment about her legs.
Raisman, the 23-year-old gymnastics star, spoke about sharing the stage with “one of the old greats,” former Los Angeles Kings center Marcel Dionne, to present the Lady Byng Memorial Trophy, an annual award for an NHL player who displays — irony alert — gentlemanly conduct.
The 65-year-old Hall of Famer then took the banter to a creepy new level.
“Thank you, thank you,” Dionne began. “And I am excited to be on stage with three-time Olympic medalist. Look at those legs.”

OK, a little creepy for a guy to be checking out a chick young enough to be his granddaughter, but she seems to have handled the incident with more grace than Post reporter Jaclyn Hendricks . Feminists claim — and therefore, the social justice left that dominates our culture must agree — that “the male gaze” is equivalent to rape. By “the male gaze,” they mean normal men doing what normal men do and checking out attractive women. Mainly, the women who object to “the male gaze” are not often checked out by normal men.

So, I guess, the point is, we have to stop getting outraged over minor stuff. Although that’s not how the internet works. You’re supposed to show outrage over trivial things because it shows how enlightened and “socially conscious” you are. And if you don’t show sufficient outrage, the Sensitivity Police might come after you.

After the jump is something extremely offensive. Deal with it as best you can. 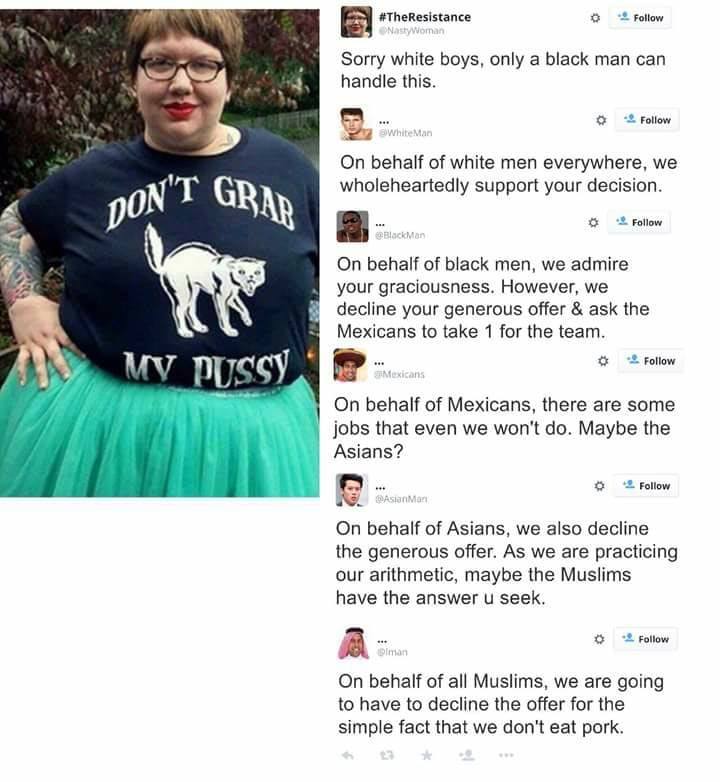