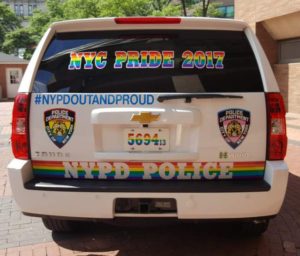 The 69 in the license plate number, was that just a little over-the-top? No? Well, all right then.

This isn’t just virtue-signaling, it’s a message that the State is fully invested with gay activists, even putting taxpayer money into celebrating their lifestyle. That LGBT’s are a politically favored group. Which is funny because I’ve always been told the reason Christmas trees are banned from public buildings is because the State is not supposed to signal preference for one group over another. Yet, they ban the Confederate flag to demonstrate that white southerners are a politically-disfavored group.