I cannot do justice to this post by quoting any of it. You’ll have to read the whole thing. But the long and the short of it is, the Obama Justice Department and Blue State Democrats pursued policies to keep criminals out of jail and release them to prey on law-abiding citizens.

(30) The end result of Democratic “reform” is that criminals now commit crimes with impunity, and people are too afraid to call the cops.

(31) There are no penalties for threatening witnesses and skipping your trial. Nobody comes looking for you.

(32) And if you get arrested, they immediately release you.

Just for one example, here are some of the things California reclassified from violent felonies to non-violent misdemeanors, all in an effort to keep criminals out of jail. 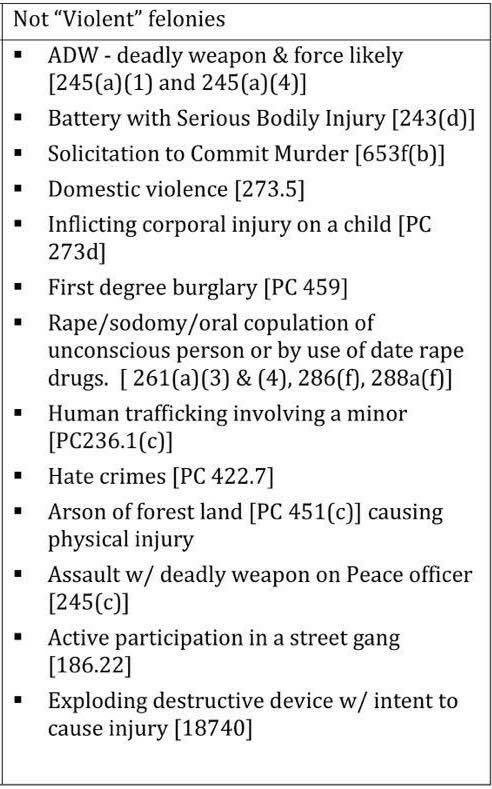 So, long story short, in California, you can beat up a child, or drug and rape someone and those are considered non-violent misdemeanors. But the cops will come down on you like a dumptruck full of bricks if you try and sell flowers in front of a school without a permit.

Instead of jailing criminals, Democrats have started the approach of politely asking urban thugs not to commit murder on certain weekends. I am not making this us.

Organizers aim to stop the shooting from Friday, Aug. 4, through Sunday, Aug. 6, with a unified and blunt message: “Nobody kill anybody.” Their message has been printed on T-shirts and flyers. They designed a website and held community meetings. More than 1,600 people visited their Facebook page.

Next month’s ceasefire would prove successful if it deters a single shooting, (an organizer)said. And she figures the movement has already saved a life somewhere. “Somebody was plotting on this weekend,” she said. “Now they’re not going to do it because of a rumbling in their soul.”

Hey, who needs crime statistics when you have a community organizer who can sense the souls of gang-bangers.