No cost is too high to meet Eurotopia’s insatiable demand for green virtue-signaling. Forests are being devastated to provide wood to burn for power in place of coal of nuclear for no logical reason. (And as an added bonus, burning wood to make electricity releases even more CO2 into the atmosphere than the technologies it replaces.)

The latest virtue signaling fad to sweep Europe is to outlaw cars and trucks that are fueld by gasoline and diesel fuels. Sweden and France have already passed laws to phase out non-electric vehicles by 2040, and there is a movement for other countries to follow suit. It is an article of faith on the environmental left that electric cars are non-polluting and will save the world from ManBearPig.

The batteries to power Eurotopia’s new fleets of electric vehicles will require staggering amounts of rare Earth metals as well as lithium and cobalt. The extraction of these elements from the Earth is so environmentally devastating that no advanced western country would ever allow it to take place on their soil. The Eurotopian greens are only too happy, however, to shift the burden to places like Communist China and Africa, where environmental protections are non-existent and the people doing the hard labor are so backward and deplorable they probably use the wrong gender pronouns. So, who cares what happens to them?

By the way, as an added bonus, those electric Tesla’s and Volvo’s also promote third world child slavery.

Dorsen, just eight, is one of 40,000 children working daily in the mines of the Democratic Republic of Congo (DRC). The terrible price they will pay for our clean air is ruined health and a likely early death.

Goldman Sachs, the merchant bank, calls cobalt ‘the new gasoline’ but there are no signs of new wealth in the DRC, where the children haul the rocks brought up from tunnels dug by hand.

No one knows quite how many children have died mining cobalt in the Katanga region in the south-east of the country. The UN estimates 80 a year, but many more deaths go unregistered, with the bodies buried in the rubble of collapsed tunnels. Others survive but with chronic diseases which destroy their young lives. Girls as young as ten in the mines are subjected to sexual attacks and many become pregnant.

Yeah, but isn’t it worth it for the smug sense of superiority leftists get from plugging their Teslas and Nissan Leaf’s into the power-up station? It totally is, isn’t it? 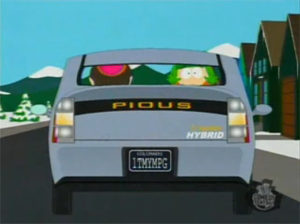