When Eric Clanton was sneaking up behind pro-Trump supporters and bashing them in the head with a bike lock, that was OK, according to the Washington Post. Because, y’see, he was ‘fighting Nazism.’

Antifascists argue that after the horrors of chattel slavery and the Holocaust, physical violence against white supremacists is both ethically justifiable and strategically effective. We should not, they argue, abstractly assess the ethical status of violence in the absence of the values and context behind it. Instead, they put forth an ethically consistent, historically informed argument for fighting Nazis before it’s too late.

You see, political violence is OK if you think the other side are National Socialists.

Psst, Washington Post, you are aware, are you not, that what happened in Barcelona yesterday was political violence on the part of people who believed they were opposing evil and injustice, right?

And their sisters at the New York Times are arguing that the Free Speech rights of white people should be taken away, because white people have too much power and they should be silenced so that the Rainbow Coalition can scream at them. I am not making this up.

We are, as Scott Adams notes, in the middle of a mass public hysteria. To people outside the current mass hysteria, it’s obvious that Donald Trump is not a Russian puppet, that Mike Pence has no desire to electrocute gay teenagers, and … most of all… that racism is not running amok in the country. To those of us with a lease on sanity, the deranged left look like crazed Salem witch-hunters. It’s only to the people who have lost their minds inside the bubble of hysteria that this makes sense.

Unfortunately, the people who run our mass media complexes are the ones who have lost their minds. Unable to come to terms with Hillary’s loss, they’ve retreated into a bubble of hysteria where perfidious Russians control the Government and half the country are racist Nazis who must be purged… violently if necessary. 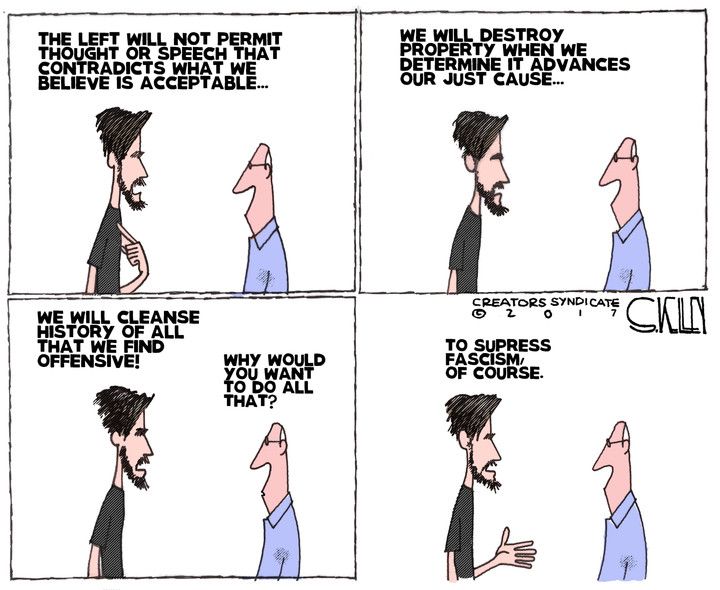