“Researchers” claim that the reason grown men are better at math and physics is because little boys pee standing up.

The three professors didn’t publish their thoughts on a satirical website like The Onion. Instead, they published on Tes, a website that provides “Educational materials, jobs, news, and courses from the world’s best community of teachers and school leaders.” In the article, Anna Wilson, Kate Wilson, and David Low argue with a straight face that peeing standing up provides an advantage for boys over girls in learning physics.

Explaining what prompted their musings that led to their conclusion about the advantages peeing standing up gives boys, the professors write, “The gender gap in physics, and other related subjects including engineering, has long been a cause for concern. … Therefore we have to ask: why don’t young women perform as well in physics?”

My guess is that this “study” will lead to a Harrison Bergeron scenario where boys are encouraged to pee sitting down so as to eliminate their ‘unfair advantage.’  It’s already happening in Eurotopiastan.

It never even occurs to so-called “scientists” that evolutionary differences in the brain may account for why men are generally over-represented in STEM fields. That is by far the more probably explanation, but it is a Heresy Against The Narrative. The left — while claiming to believe in science — in fact are dogmatically attached to the myth that gender differences are entirely social and caused by the Evil Patriarchy. And that if little boys are forced to play with dolls and pee sitting down, womyn will develop an interest in science and engineering. 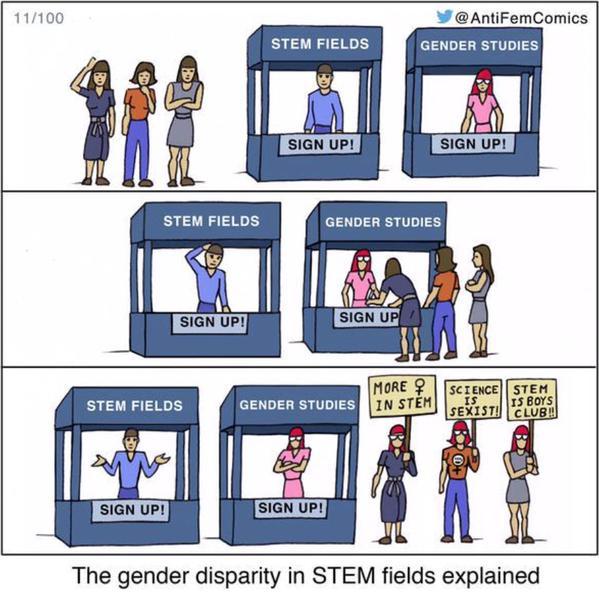