Hey, it’s not me that’s saying it, it’s a study by the left-leaning Pew Research Center.

“In nearly every domain, across most of the roughly two dozen values questions tracked, views of Republicans and Republican-leaning independents and those of Democrats and Democratic leaners are now further apart than in the past,” Pew noted.

NRO has a nifty little graphic that shows just how much the Democrats have shifted hard left. 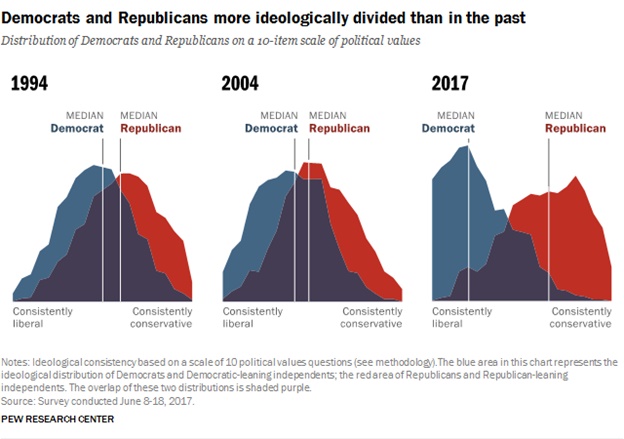 Emblematic of this hard-left shift is the talk that ancient Senator Dianne Feinstein — a doctrinaire liberal — may be challenged by hard-left California hairpiece Kevin de Leon (of “ghost guns that fire 30 magazine clips per second” fame.) De Leon is so hard left he makes Bernie Sanders and Liz Warren look like … um… someone just moderately left-wing. Susan Collins, maybe.

When Dianne Feinstein was first elected to the Senate, she was decidedly left-leaning, Someone like Kevin de Leon would have been considered part of the radical fringe. He’s now quite the mainstream of a party whose activist core believes that equates Free Speech with White Supremacy and due process with rapists.

Personally, I’d rather see de Leon as President… of the People’s Democratic Republic of California.