Answer: When you are a leftist icon or a powerful Democrat politician*.

Michael Kelly’s classic 1990 GQ profile, “Ted Kennedy on the Rocks,” recounts a sozzled and priapic 57-year-old man hitting on 16-year-old congressional pages, gulping down seemingly all the alcohol along the Eastern seaboard, and sexually assaulting a waitress at a DC restaurant with fellow solon Chris Dodd (Now the Chairman of the Motion Picture Association of America – VTK). A former staffer told Kelly that one of his erstwhile colleagues on the Senator’s staff acted as “a pimp…whose real position was to procure women for Kennedy,” not unlike the role that Italian fixer Fabrizio Lombardo played for Harvey Weinstein. Kennedy, Kelly concluded, had been raised “to take what he wants, to treat women as score-markers in the game of sport-fucking.” But thanks to the diligence and professionalism of his staff, Kennedy became a hero to liberals, referred to ubiquitously as “the lion of the Senate.”

Bill Clinton’s relationship with White House intern Monica Lewinsky should never have been grounds for impeachment. Still, it was nonetheless the epitome of the inappropriate workplace sexual relationship that feminists typically decry. Indeed, the power dynamic between these two consenting adults may have been the most disparate in modern American history, what with the most powerful man in the world deploying his clout – and then, when scandal erupted, that of his entire political operation – against a hapless intern. Like every single one of Bill Clinton’s many female accusers, Lewinsky was viciously attacked by liberals and ostensible feminists. “Drag a hundred dollars through a trailer park and there’s no telling what you’ll find,” Clinton adviser James Carville infamously said of Paula Jones. Yet for many purported feminists, Clinton’s atrocious behavior toward individual women was irrelevant. “I would be happy to give him a blowjob just to thank him for keeping abortion legal,” Time’s then-White House correspondent Nina Burleigh declared, offering precisely the sort of (gendered) indulgence that liberal cads like Clinton, Kennedy and Weinstein hope to gain in exchange for promoting left-wing causes. “I think American women should be lining up with their Presidential kneepads on to show their gratitude for keeping the theocracy off our backs.”

Read the rest of it. 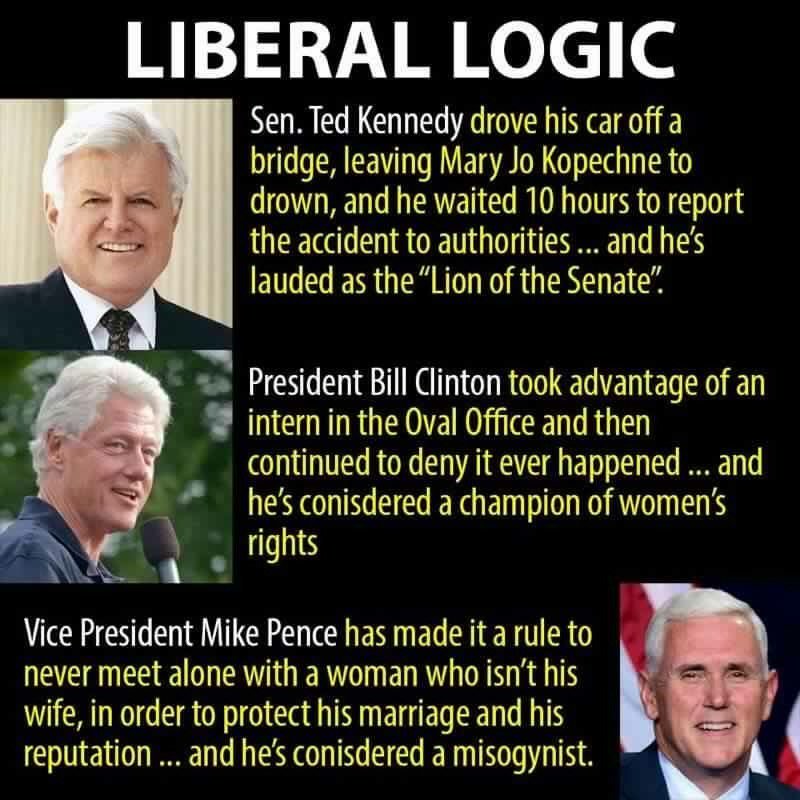 * For whom it is also OK to take money from foreign Governments in exchange for political favors.