Thousands of people who didn’t know what the CFPB was last Thursday are totally up in arms and screeching that for Donald Trump to appoint one of his people to head the agency (which is what presidents do with executive branch agencies) is overthrowing the rule of law, or something.

Likewise, now that PDT has called out Elizabeth Warren for claiming Native American ancestry in order to get Affirmative Action points, a lot of Democrats have decided that Cultural Appropriation is OK under certain circumstances (i.e. When a Democrat does it) and it’s an outrageous racist slur to point out when a Democrat has done so. Suddenly, the white privilege of claiming to be a minority for personal benefit is cool again.

Oh, and also, “Don’t be friends with anyone who doesn’t hate Trump” is an actual thing.

But those people are pikers compared to the Democrat leftists who are having a hissy fit because… I am not making this up… Melania Trump decorated the White House for Christmas.

Forget the Upside Down. The real strangest thing of 2017 is that the White House has chosen to get into the Christmas spirit by making the Presidential residence look like a dark alternate dimension where everything is dying and all hope is lost. I mean, it’s definitely appropriate, but it’s still a bizarre decision.

This isn’t just one left-wing media outlet’s take, either. Vox went there. The Daily Beast went there. Quite a few places went there, actually.

Such are the wages of Trump derangement; anything that Trump or anyone in his family does sends the left and NeverTrumpers like Bill Kristol and Evan McMuffin into fits of spittle-flecked derangement.

I realized yesterday the PDT doesn’t have a pet, and I think that’s for the best. I’d hate for millions of kittens and puppies to get slaughtered just because Trump-Derangers turned on them.

To be fair, Melania’s White House Christmas décor isn’t to my taste, but then neither was Michelle Obama’s “Suburban Mall on the Verge of Bankruptcy” Christmas look from last year. 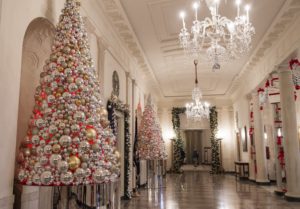