Obama’s ambassador to the UN invited a bunch of her fellow feminist dingbats to an Election Night victory party in November 2016. It didn’t quite work out the way they had hoped. In fact, these “strong, independent women” have been dealing with PTSD as a result of their Election Night loss ever since.

“It’s like we’ve somehow collectively landed in this place, but the people who are going to feel this, and be affected by this are these innocents. And as it happens, I was looking at a young child, but there’s so many other innocents who are being subjected to the cruelty, as we speak here today,” Power said.

She added, “But yes, I think that scene moves viewers the most because it triggers, I think, a kind of post-traumatic stress about their own election night experience, which mirrored mine.”

She should travel down to Walter Reed Hospital and talk to some veterans about coping with PTSD. I am sure they will welcome her insight.

Is it just me, or does Samantha Power look like a transgendered Sen. Jeff Flake? MTF mid-transition. The hormones have kicked in but the surgery hasn’t been scheduled? That sounds about right. 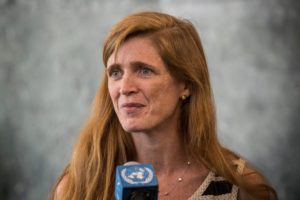