I am told an old drunken, washed up, politician read from a book at some music award thingy last night. Do I have that right?

Also, a group of ultra-privileged multi-multi-millionaires who live in gated communities patrolled by armed guards to keep the riff-raff out… are planning to hold a “People’s State of the Union” to protest the President. 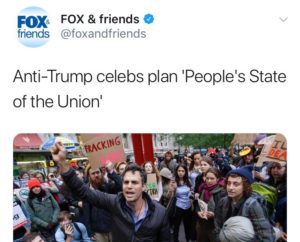 The official Democrat response to the SOTU will be given by Joe Kennedy, nephew of the drowner. He’s described as a “rising star” in the Democrat Party. Because nothing says “healthy, vibrant democracy” like a permanent, hereditary ruling class.