In the Senate Foreign Relations Committee, all Republicans voted for Grenell and all Democrats voted against him, so this is not the case where Republicans are blocking the nomination of a gay man because of cultural or religious objections, he said.

Rather it is the Democrats, who are abandoning their support of equality with their opposition to a highly-qualified nominee to one of the country’s most important diplomatic posts–keeping it vacant for more than a year, he said. 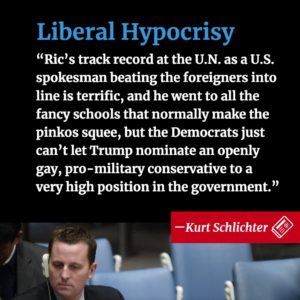