Just caught this on AOL. Isn’t it the president’s job to reach out to the leaders of the opposition: 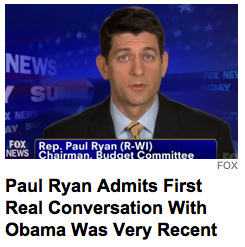 Two days ago, the Washington Examiner’s Byron York reminded us of a Democratic failure our friends in the legacy media tend to neglect:

Lawmakers are required by law to pass a budget each year by April 15, but there’s no provision to punish them, or even slightly inconvenience them, if they don’t.  In [Senate Majority Leader Harry] Reid’s case, the Senate last passed a budget in April 2009, 1,351 days ago as of Wednesday.

Not quite sure how to refine a google news search to compare the number of articles written about and amount of broadcast “news” time devoted to Todd Akin’s crazy comments on rape and those on the failure of Reid’s Senate Democrats to meet their legal obligations in passing a budget.

Seems the Missouri Republican fit the legacy media narrative about Republicans being fringe characters, but somehow Mr. Reid’s inaction is at odds with their conviction about the Democrats being the more responsible party.

Just caught this in a Washington Examiner editorial on Nancy Pelosi’s determination to stay on as House Democratic Leader:

Just look at Pelosi’s record as speaker. When she first took the gavel on Jan. 3, 2007, the federal government was on track to spend just $2.7 trillion that year. The federal deficit was a mere $160 billion, and the cumulative national debt was $8.7 trillion. Only 7 million Americans were unemployed, and the nation’s unemployment rate was just 4.6 percent.

Four short years later, when Pelosi handed the gavel back to the Republicans, the country looked a bit different. Spending had soared to $3.6 trillion. The federal deficit was $1.3 trillion, and the national debt was $14 trillion. Fourteen million Americans were unemployed, and the unemployment rate had almost doubled to 9.1 percent.

Wonder why Democrats don’t hold this politician to account for her record.

So, will our legacy media will ever get around to covering Reid’s do-nothing Democratic Senate?

Because I will be attending a conference all day today entirely unrelated to politics, I won’t have much (if any) time to blog.  In order to get something up that might stimulate some discussion, in lieu of a traditional post (is there such a thing as a “traditional” blog post?), I’ll share part of an exchange from the thread following a left-of-center Facebook friend’s post..

Answering one of his friend’s contention that there were many reasons to vote against Mitt Romney, “most of which would seriously damage the country and the world”, I replied that the incumbent’s policies have already done enough damage:

It’s time for a change and some real reform. And given today’s [this exchange was on Friday] anemic employment numbers, we know the current policies aren’t working. Romney is far from perfect, but at least his policies will start to repair the damage of the last 3 1/2 years.

An Obama supporter retorted, “The reason why the recovery has been anemic is that every single attempt the democrats have attempted to try to fix the economy have been filibustered by the republicans. ”

Reminding him how much of his agenda the president pushed through from 2009-2010, I asked this interlocutor to specify which particular bills Republicans had successfully filibustered in the 111th Congress. (And what attempts Obama had made to lobby moderate Senate Republicans to switch their votes on cloture.)  Not just that, I asked Obmaa’s defenders to specify further which particular Bush policies helped drive us into the ditch.

None did.  Maybe some of our critics can.

Just shy of three-and-one-half years ago, Barack Obama entered the Oval Office with more good will perhaps than any newly-elected president since Jimmy Carter. He had vowed to change the tone in our nation’s capital, a vow welcome after sixteen years (with a brief hiatus just after 9/11) of polarized politics.

And yet a year after Obama’s inauguration, Gallup reported that the Democrat’s approval was the most polarized for any “First-Year President.”

I recalled that abrupt shift yesterday when following the link Jay Cost’s insightful piece on “Obama’s dilemma” (more on that in my next post) to Sean Trende’s article from the previous day “about what Obama could have done differently in 2009“.  That article also merits your time — and attention.

Trende approaches the topic from a slightly different perspective than I did when considering the swift drop in Obama’s approval.  Trende considers the different policy approaches the president should have taken.  Instead of a constant re-pivot to the economy, the Democrat, Trende contends, could have kept his focus on the economy.  I wondered about the incumbent’s tone, whining about the problems he inherited, blaming Republicans for obstruction (or being beholden to the politics of the past).

On one major point, however, Trende’s thinking (approximately) parallels my own:

For one thing, the headlines would have been dominated by the tax cuts, aid to the unemployed and to education, and so forth. Instead, there was a massive, amorphous “stimulus” with a $787 billion price tag for people to digest.

Quite frankly, Republicans would have supported at least some of the measures — in fact, the “mini-stimuli” approved throughout late 2009 and 2010 almost all passed with substantial Republican support. So it would have been with a “pure” tax-cut bill that kicked off the president’s term.

If he had insisted on breaking up the stimulus, the president would instead of needing to rally his own party for one big vote, would have constantly been reaching out to Congress, likely forging different coalitions for each bill — working with Republicans on several.

We would see him working energetically — over a period of weeks — on measures to stimulate the economy.  And that energetic image would likely have become impressed in Americans’ minds.  They may not supported his every policy, but at least appreciated his constant effort. END_OF_DOCUMENT_TOKEN_TO_BE_REPLACED

House Minority Leader Nancy Pelosi (D-Calif.) vowed to drop congressional defense of the Defense of Marriage Act in court if Democrats retake control of the House in November.

Um, Nancy, please do tell me why you don’t bring up DOMA repeal when you were Speaker and had a 76-vote (256 Democrats to 178 Republicans) majority in the House.  We wouldn’t have to worry about litigating this issue if Congress had repealed the legislation.

RELATED: When they had a majority, House Democrats never voted on repealing DOMA, yet now they’re campaigning on Obama’s support of same-sex marriage

On its website, The Democratic Congressional Campaign Committee (DCCC) bills itself as “the official campaign arm of the Democrats in the House.”  And last night via a friend’s Facebook link, I learned that this outfit was garnering signatures in support of the president’s new stand on gay marriage:

That takes some cheek. Since a Republican Congress passed the Defense of Marriage Act (DOMA) in 1996, Democrats have controlled the House for four years, from January 3, 2007 until January 5, 2011.  Not once did then-Speaker Nancy Pelosi (D-CA) hold a vote on repealing that legislation.  Not once did she hold a vote on giving benefits to the same-sex domestic partners of federal employees.

These Democrats now praise Obama’s support of same-sex marriage, yet, when they had a chance to act on the issue they did nothing.

Something tells me that once the DCCC gets your name, they’re going to be hitting you up for campaign contributions.  Maybe this thing is all about fundraising after all.

Yesterday, when I announced my determination to slow down the pace of blogging this week, I had intended to post only a handful of pieces on gay issues, first to indication my opposition to North Carolina’s Amendment One, then to offer a followup on the Grenell Matter, noting how that latter showed not the anti-gay animus that some Democratic partisans and gay activists were determined to find in the GOP, but the party’s own awkwardness on gay issues (for more on that, just read the passage I quoted in this post from the Huffington Post‘s Jon Ward).

Where the presumptive Republican nominee has handled social conservative concerns about a gay staffer in a most awkward manner, his Democratic counterpart has shown incredible “cowardice,” as one blogger put it, in handling the issue of gay marriage.  Bruce blogged that Obama “stepped in it.”  Others have been even less forgiving.

The real problem is that Obama didn’t try to find some sort of compromise in the first two years of his term when he had overwhelming Democratic majorities in both houses of Congress.  Had he had some significant political savvy, he might, for example, have sat down with gay leaders and pointed to the passage of Prop 8 in California, saying that it wouldn’t be prudent to push forward on gay marriage per se, but would instead focus on civil unions (touting such legislation as the Domestic Partnership Benefits and Obligations Act (H.R. 2517), a bill in the 111th Congress “which would grant domestic partners access to federal employee health care benefits“); he would have been wise to ask these leaders to identify key Republicans (e.g. Ileana Ros-Lehtinen in the House and Susan Collins in the Senate) who would be willing to help spearhead such efforts.

The Democrat would then be able to point to efforts (likely successful) he had made to advance the cause of same-sex couples.  There might not be a public outcry over gay marriage had he had accomplished something in terms of federal recognition of same-sex civil unions, even if just for government employees. END_OF_DOCUMENT_TOKEN_TO_BE_REPLACED

Let me begin by reminding you of some important facts.  Democrat Barack Obama was elected president in November 2008, with strong support from gay groups, including many supporting state recognition of same-sex marriage.

When he took office, the president’s party, the Democratic, enjoyed overwhelming majorities in both houses of Congress.  From July 7, 2009 until February 4, 2010, that majority was filibuster-proof, that is, Senate Democrats didn’t need a single Republican vote to invoke cloture; they could vote on any item they wanted to.  Said legislative Democrats never voted to repeal the Defense of Marriage Act or even to pass a federal civil unions bill.  They only got their act together to vote on repealing Don’t Ask/Don’t Tell (DADT) after the election, but before the swearing in, of a Republican Congress in November 2010.

In short, Democrats in the 111th Congress had the chance to act on issues of concern to gay Americans, but failed to do so.

Now to the question.  Earlier today, Jennifer Rubin asked, “Are gay-marriage advocates being taken as fools?”

On “Meet the Press,” Vice President Joe Biden said he’d be “comfortable with gay marriage,” an odd formulation for an important matter of public policy. (This is truly liberalism’s triumph of good intentions over actions.)

This is becoming the proverbial Lucy and the football. One wonders how often pro-gay-marriage activists, like poor Charlie Brown, are going to fall for this stuff.

First, forking over lots of money gives you access; threatening to cut it off gets you attention. The leverage is with the gay community, whose financial and electoral power is considerable. But as long as the campaign takes gay voters (like Jews, Hispanics and union members) for granted, there is no reason for President Obama to move on this before the election.

Maybe had HRC not been so quick to endorse Obama, they might have been able to extract some concessions from the Democrat.  It seems though that the heads of that and other gay groups would rather be loved by the Democrats than see legislation passed recognizing our relationships.