Seems the Obama team thought rude Joe would help the Democratic ticket, but it sure didn’t help them with one group which leans slightly toward the president’s party.  Women were particularly put off by the Vice President’s behavior.  Note that the three participants in this focus group who responded to Frank Luntz’s point about Biden’s interruption and occasional laughter were all women:

“Even“, notes Ed Driscoll at Instapundit, CNN’s Gloria Borger admits, “He was condescending at times to Paul Ryan. I think I could have done with a lot less eye-rolling and chuckling on the part of Joe Biden.”

That said, this does seem to have played quite well with the Democrats’ face.  My liberal Facebook friends are beside themselves with glee; one offered, “Ok so maybe Biden shouldn’t have laughed and snickered so much…but how could you not when your debating Eddie Munster?”  FWIW, haven’t caught any of them praising Biden for defending Obama,  instead they’re hailing him for attacking Ryan.

Maybe they decided to make a test of the angry, rude Joe to see how it plays as a possible strategy for Obama next week.  This strategy looks like a winner if the goal is to fire up the base, but, it ends up, as David French puts it, making the Democratic “ticket less likable, thus continuing to squander a key favorability advantage.” END_OF_DOCUMENT_TOKEN_TO_BE_REPLACED

In the wake of Obama’s disastrous debate performance last week, Michael Moore tweeted:  “This is what happens when u pick John Kerry as your debate coach.”

So, use the comments section below to weigh in on this matter.  Who should Obama pick to replace John Kerry and play Mitt Romney in his up coming debate practice sessions?  We could pass your suggestions onto the campaign.

In the wake of the debate, writes Ed Morrissey, Democrats are

. . . not talking about a second-term agenda; all they’re talking about is how bad Romney will be for America as President.  They have focused more lately on his tax plan, misrepresenting it as a massive middle-class tax hike, but that didn’t work for Obama in the debate when Romney was on stage to answer that attack.  Nor did the character attacks work particularly well as a knock-out blow to Romney over the summer, when Team Obama dominated the airwaves with those attack ads.  Now that voters have seen Romney on stage with Obama and looking at least as presidential as the incumbent, if not more so, [Fox News analyst Peter] Johnson’s right — those attacks are likely to backfire.

But, given the Facebook posts of my liberal friends, these attacks do seem to be increasing.  Even as the Obama campaign tries to spin the jobs numbers (job growth which is really quite anemic), his “acolytes” are focusing on how horrible, no good and very bad is Mitt Romney.  Obama seems to be trying the tack himself.

Earlier today, the Boston Herald reporter that, in the battle for Massachusetts’s 6th Congressional District, Republican Richard Tisei has opened up a 6-point lead over 7-term incumbent John Tierney.  37 percent favor the challenger with only 31 percent pulling for the incumbent. “Thirty percent said they were undecided.”

It’s bad news when any incumbent polls below 50 percent, but with Tierney nearly twenty points below that threshold, signs are good that he won’t be returning to Washington next fall.  His loss would not only mean the loss of a second Democratic seat from the Bay State*, it would also mean that Massachusetts would still be sending a gay man to Washington, but this time, a Republican favoring small government rather than a mean-spirited Democrat voting, as if by rote, for nearly every bill expanding the size — and scope — of the federal government.

On the issues, Tisei is exactly where we would like him, a fiscal conservative concerned that our “economy is being strangled by unprecedented debt, spending, and over-regulation.”  This Republican knows that “Government does not create wealth or jobs in this country”:

We need to strengthen the conditions that lead to entrepreneurial growth and jobs for our people. Right now, job creators remain unsure of future tax rates and massive regulatory burdens coming from Washington. Our experience of the last 3 years makes clear that such an approach doesn’t work. “Obamacare” is but one of many massive new burdens being imposed on job creators. In 2011 alone, the Obama Administration proposed 219 new regulations, each of which would cost $100 million or more to implement. Job creators simply cannot move under such over-regulation.

Sounds like my kind of guy.  And that’s why I’m endorsing Richard Tisei for the United States Congress.

Don’t let that poll give you a false sense of comfort.  It shows that Tisei has a good chance to win, but that he still needs make his case to undecided voters.  If he can get his message out, he can convince those who have yet to make up their minds that he has the better plan to promote economic growth and encourage opportunity.  Join me in supporting this good man.

Wouldn’t it be great to have an openly gay, fiscally conservative Republican representing Massachusetts in the United States Congress?

Twice while helping out with Outfest, I have experienced the class of Chaz Bono.  When honored by the festival one year on Opening Night, instead of delivering a long speech, he, humbled by the honor, briefly thanked the festival, then returned to his seat, understanding that people were eager to see film.  Another time, when I was managing the theater where he was appearing, he showed incredible courtesy to the Outfest staff (including yours truly), thanking us for our assistance, respect to his audience, staying to talk to anyone who wished to have a word with him.

He is showing his class once again — and a bit of courage — by joining Cindy McCain and former Los Angeles Mayor Richard Riordan in hosting a fundraiser, organized by our friend Ric Grenell, for his step-mother, Republican Congresswoman Mary Bono Mack on Sunday, October 14, 2012 from 5:00 until 6:30 PM. For more information and to RSVP, contact Reagan Cotter.

Mrs. Mack is the only Republican woman in California’s House delegation.  She voted to repeal Don’t Ask/Don’t Tell, has signed Americans’ for Tax Reform Taxpayer Protection Pledge and  has been honored by that organization as well as the National Federation of Independent Businesses and the National Association of Manufacturers.

Join me in supporting this good Republican, voting the right way on DADT repeal and supporting a smaller, less intrusive federal government.

In quoting Salena Zito’s post on why Wisconsin is in play, Ann Althouse offers an insight into why some Americans continue to support the president despite the down economy:

At first, Jeff Millard was undecided about who to vote for in November.

“I am not particularly happy with Obama,” the retired auto-parts storeowner said of the man he supported in 2008.

His wife, walking beside him on the Military Ridge state trail, overheard him voicing doubt. She let him know it was not an option.

“What about my reproductive rights?” she asked, clearly upset. “No, we are voting for Obama!”

“How old”, Althouse asks, “does a woman have to be before she stops thinking first and above all about her reproductive rights?”

It does seem that when it comes to politics, a good number of people, when learning you’re a Republican, insist on talking about abortion (or, as the woman cited above puts it, “reproductive rights”).  For those individuals, it seems, that social issue is the only issue that matters.  And for others, another social issue dominates their discourse.

It helps explain although entrepreneurs in this town (Los Angeles — and I’m sure others) complain about state, local and federal regulation making it more challenging for them to run their enterprises, they continue to vote for — and sometimes even support financially — Democrats.

While doing cardio today at the gym, I thought that just maybe CNN would actually look into a Democratic scandal as they reported the (then-just released) Department of Justice Inspector General’s report on Operation Fast and Furious.  But, soon thereafter, they returned to coverage of the Romney tape.  (Will two days after this report is released, will CNN return to coverage of Fast & Furious?)

When I returned to the cardio machines after my (roughly one-hour) weight workout, CNN was still droning on about the tape, but didn’t seem to have concerned about what might have been in the missing 1-2 minutes.

Commenting on the media coverage, Erick Erickson contends that

. . . this episode epitomizes how the media is an enemy collaborator with Barack Obama’s campaign. When conservatives accurately quoted Barack Obama’s “you didn’t build that” line including the context in which he meant it, the press immediately folded when Obama claimed conservatives were taking him out of context. In Romney’s press conference after the revelation of the tape he said he was speaking off the cuff and maybe was not as articulate as he could have been without a prepared text. Nonetheless, unlike Obama’s “you didn’t build that” remark, the press demands that we all take Mitt Romney literally in his remarks.

And it was interesting that CNN kept repeating the remarks made on the “secret” video without offering any of Mr. Romney’s subsequent public appearances where he attempted to provide that context.

Shortly after arriving in Cincinnati on Monday, I drove into the ‘burbs to watch my second youngest nephew’s soccer scrimmage. In the parking lot, I noticed a great variety of bumper stickers, some about local sports teams, but most about politics.

I saw a good number supporting the Senate campaign of Josh Mandel, but none for his opponent Sherrod Brown, one of the most liberal members of the United States Senate. I saw stickers calling for the repeal of Obamacare, but none expressing support for the legislation overhauling and increasing taxes on our health care system.

And I saw stickers supporting Mitt Romney for president and the Romney-Ryan ticket, but none advocating the reelection of the incumbent or promoting the Obama-Biden ticket.

Now, to be sure, this is just one upper middle class region in Ohio, and don’t know if we can extrapolate much from it, but it does suggest that soccer moms (& dads) in southern Ohio may be lining up behind the Republican ticket.

Did not catch some other anti-Obama stickers, but none this like:

More evidence from Charlotte that the Democrat Party has devolved into the American Marxist Party led by Chairman Barack.

Earlier today, when I clicked on the Charles Krauthammer link atop Jennifer Rubin’s Washington Post blog, instead of getting that sage conservative pundit’s original insight into the events of the day, I got Dana Milbank’s stale repetition of conventional wisdom. (Maybe the Post editors set it up that way because otherwise no conservatives would read Milbank.) 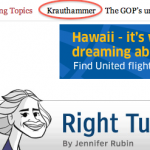 The Republicans’ soon-to-be nominee for vice president is supposed to be delivering a message about jobs and the economy, but he’s finding he cannot escape his longtime House colleague, now a national pariah for his exotic views on rape.

Well, perhaps for Beltway denizens like yourself, Dana — and for Democratic partisans, but most Americans will evaluate Mr. Ryan not by words he has deemed “outrageous”, but by the way he carries himself next week at the Republican convention and in the coming months on the campaign trail.

The only reason anyone is connecting Ryan to Akin is because left-leaning pundits and Democratic partisans are dwelling on the issue.  I mean, come on, Dana, who’s asking these questions?  Who’s making this a story?

Oh, and by the notion, about the notion circulating among such pundits about Ryan trying to “restrict the definition of rape,” well, that’s based on false New York Times report.  The Times reporters failed “to to provide very basic context about the bill Ryan cosponsored”: END_OF_DOCUMENT_TOKEN_TO_BE_REPLACED