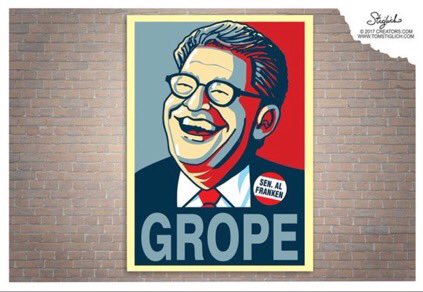 If anyone needs to rationalize a vote for Roy Moore, there it is.

“But what Roy Moore is accused of is so much worse than what Al Franken actually did.”

Fine then. Let us remember then that a Democrat Congressman sodomized a sixteen or seventeen year old House Page, was re-elected six times by his Democrat constituents, and had a Wildlife Sanctuary named for him by his Democrat colleagues. (He remains an LGBT hero.)

So, basically, the voters of Alabama have a choice between a guy who was possibly forty years ago a moral reprobate, and a guy who will vote in lockstep with Kamala Harris and Chuck Schumer on abortion, gun control, tax policy, and amnesty for illegal immigrants. for a lot of people, this is a sucky choice. But it is what it is.

When this story broke, I was sure Roy Moore was toast; and he probably would have been if the Al Franken story hadn’t broken on top of Gloria Allred getting involved and promoting  an accuser with a forged yearbook and a story that fell apart like an IKEA entertainment center. He probably has a shot now that the Democrats have demonstrated it was always about power and never about women. He really should send Al and Gloria a nice thank you note for the lifeline they threw him.

I also don’t think it’s gone unnoticed that certain Republicans who were outspoken about Roy Moore have been conspicuously silent about Al Franke.

On an unrelated note, Colin Kaepenick is old enough to run for Senate against Dianne Feinstein. Wouldn’t that be fun to watch?

Mitch McConnell and his crony, big donor buddies are estimated to have spent $10 Million in Alabama (I have also heard $30M) because they preferred one Republican candidate over another Republican candidate. They lost their bet, and squandered millions of dollars that would have been helpful in next year’s senate races.

As a senator, Ray Moore is not my cup of hot chocolate. Too old and too cozy with an authoritarian state for my preferences. That said, I didn’t care about the Alabama race because I would have expected Strange and Moore to vote the same way almost all of the time. OTOH, I can hope this is a harbinger of a senate without the McCains, the Collinses ,the Flakes and their like that have spent their entire careers thwarting conservative reforms and Constitutional Government.

I suspect the GOP really doesn’t really want a 57 or 58 seat senate majority. I think they like it better that they can pretend to forward conservative agenda items and then blame their failures on the defection of a handful of left-leaning Republican senators.

If Republicans don’t like that the people rejected their chosen candidate, then they should repeal the 17th Amendment. I am actually in favor of that. Since it’s enactment, the US Senate has become a parliamentary body emphasizing the desires of the national parties rather than the interests of states. And I don’t like it.

The US Senate prides itself on being ‘the World’s Greatest Deliberative Body.’ The man in the picture below is the junior senator from Minnesota. (He once said he was happy when gay people were murdered.)

Additionally, this august body includes Senator Dick Blumenthal, who lied about his Vietnam military service (he had none) and that he was captain of the swim team at Harvard. He wasn’t. Also, there’s Senator Elizabeth Warren who lied about being an American Indian in order to advance her career. It also includes Senator Kamala Harris who started her political career as the sidepiece to California Assembly Speaker and San Francisco mayor Willie Brown, who appointed her to political boards in exchange for her… um… services. And then there’s Senator Patty Murray, who praised Osama Bin Laden for building day care centers and whose college major was … I am not making this up… “recreation.”

And previous senators included Ted Kennedy, re-elected six times by the people of Massachusets after leaving a woman to drown in his Oldsmobile after drunk-driving off a bridge. Senator Kennedy also notoriously made a “waitress sandwich” in a DC restaurant with another Senator – Chris Dodd of Connecticut, who was subsequently drummed out of the senate for being on the take with Countrywide mortgage.

Not to mention, the membership of the US Senate included a real-live actual former Ku Klux Klansman, Robert Byrd; who was an elected member of the United States Senate for over half a century? (Hillary Clinton praised Grand Kleagle Byrd as a “friend and mentor.”)

So, why not Senator Robert “Kid Rock” Ritchie? Yes, there will be better people running. This guy for example perhaps. But the notion that electing Kid Rock would bring down the standards of the US Senate is laughable.

(A version of this post appeared on Ricochet yesterday)