First, thanks to everyone who joined our Election Night internet TV coverage.  It was a blast.  My office is now back to normal, sans big screen TV with Charlotte skyline.

Second, my deepest sympathies to our readers and supporters in California and Nevada.  This is what happens when public unions that receive public dollars to fund political campaigns corrupt our elections.  Ya gotta figure a way to stop that to solve your issues, I’m afraid.

Third, some 2008-era slogans come to mind:  “Elections have consequences”  “We Won”  “The Republican Party is nothing more than a regional party now” 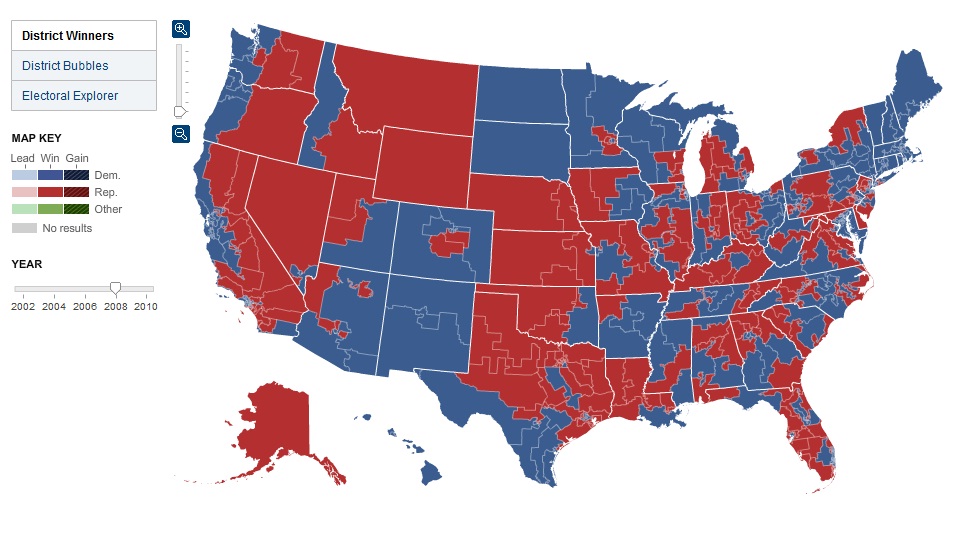 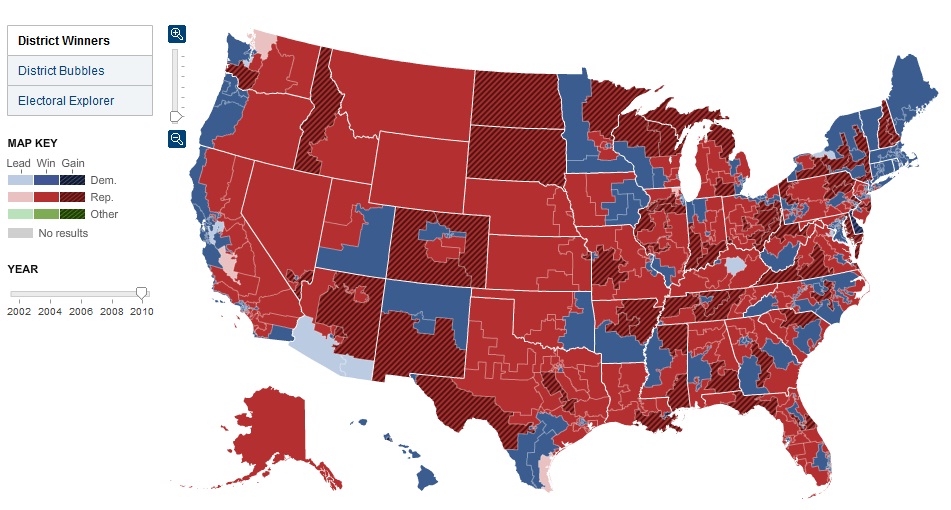 I reserve the right to gloat as much as Obama’s ego is large.

Stay tuned for a special announcement at 3:30PM Eastern.

UPDATE:  Dang it, I forgot to mention the most important thing!  If any of you are planning to be at a campaign HQ on Tuesday night, please email me and let me know and we can try to get you on the show as a contributor (iPhone & Skype would help!).

I couldn’t express it any better than Kevin Williamson did at The Corner on NRO.

About Christine O’Donnell: No strong opinion about the candidate, though I understand the reservations about her. I do not much weep for RINOs and rather enjoy the sight of them going down in flames.

What this really should communicate, I think, is that the Right needs a lot more Club for Growth–style candidate-recruiting efforts. If conservatives do not like O’Donnell, then they should be out identifying better candidates to run against vulnerable RINOs — because somebody is going to run. These incumbent takedowns are going to inspire a lot of new people to get into electoral politics, many of them without the sort of experience or backgrounds that Establishment types are comfortable with. Power, like nature, abhors a vacuum.

UPDATE at 5PM: I believe the DC event has wrapped up. I wanted to add this new video of the crowd to the top. You can be the judge on how many people were there. The video was taken before the event had begun.

LIVE FROM US CAPITOL:
UPDATE from Melissa Clothier whose iPhone is the live stream you see below: 50,000 people behind her

Do something about it.  Yes, vote in the Republican Election on November 2nd of course.

But if you are free this weekend — try to get to Washington, DC and take a stand!

We are organizing another huge 9/12 Taxpayer March on Washington. In 2009 we rallied hundreds of thousands of people and marched right up to the capitol building in Washington. This year, we are coming back in full force, and we will be focused on one message — Remember in November!

Click here to RSVP for the 9/12 Taxpayer March on Washington!

This event will be organized by the same coalition that organized the original 9/12 March on Washington — including FreedomWorks, Tea Party Patriots, National Taxpayers Union, The Institute for Liberty and a host of other great free market groups from around the country.

Who: FreedomWorks and allied conservative groups

Where: The Washington Monument and the U.S. Capitol building

I had planned to attend.  But the mortgage-paying job always wins out.  I’m saving my pennies to pay for my increased health insurance premiums and prepare for the major tax hikes approved by Obama for January 2011.

But please think about going to DC this weekend to do your part in bringing sanity back to our Federal Government.

Wow…. two weeks in a row, baby!  Tonight I’ll be talking with Ben Howe — a conservative activist and host of BTR’s “Renewing America”.  Ben attended the “Restoring Honor” rally in DC on Saturday and has some on-the-scene commentary to share. 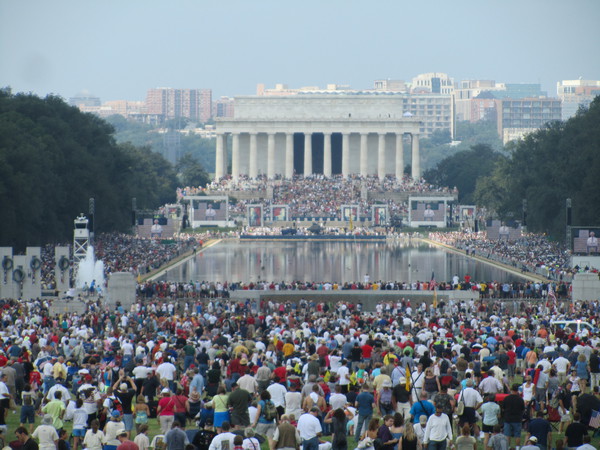 (Photo courtesy of Jon Ward from The Daily Caller)

Oh yeah… and I’m broadcasting tonight live from our nation’s capital — Washington, DC.  I couldn’t make it for the 8/28 rally, but I’m here this week for my “real” job.

And I’m just a few blocks from The White House.  Maybe I’ll hop on over to 1600 Penn Ave and ask Michelle for a crumpet.

Tune in tonight at 8:30PM for GayPatriot’s America.  We have a great chat room too!

Simple, yet effective country song about the state of our nation and how fed up most Americans are. (h/t – GP reader Spartann)

Unfortunately, standing up against the Obama Administration carries a heavy price.

Bryan Glover, an assistant coach at Grassland Middle School near Nashville, co-wrote the country music song, “When You’re Holding a Hammer, Everything Looks Like a Nail.”

It was co-written by a parent who has a child on the team. Glover, 26, said he emailed a copy of the song to friends, family members and player’s parents through his personal email account.

And that’s when all the trouble started for the self-described independent conservative.

“The coach called me and said parents were upset – that I was being politically incorrect and the song had racial overtones,” Glover told FOX News Radio. “An hour and a half later I was told I was being terminated.”

“I was informed that I was being let go because of the song,” he said, denying claims there were any racial overtones in the song.

This is why We, The People are now armed with questions and video cameras to confront our elected officials.

I’ve been thinking a lot about the prospects of the much feared age of “Big Brother” — where the Government knows all and uses that information to suppress.  And as dedicated readers know, my view of America and our past and future was radically altered after I read the book “The Fourth Turning.”

Clearly there are a lot of elements to Orwell’s vision that have arrived — too many to list, but originating with the Bush-era Department of Homeland Security.  But recently, I’ve thought about a new phenomenon that turns “1984” upside down.

I’ve also been pondering (under the influence of “The Fourth Turning”) whether or not the United States is in a “low grade civil war” (here and here) and whether it will become a “hot” one.  Yesterday’s Investor’s Business Daily has an editorial that combines all of these ideas and lays it on the line.

The Internet is a large-scale version of the “Committees of Correspondence” that led to the first American Revolution — and with Washington’s failings now so obvious and awful, it may lead to another.

People are asking, “Is the government doing us more harm than good? Should we change what it does and the way it does it?”

Pruning the power of government begins with the imperial presidency.

Too many overreaching laws give the president too much discretion to make too many open-ended rules controlling too many aspects of our lives. There’s no end to the harm an out-of-control president can do.

Bill Clinton lowered the culture, moral tone and strength of the nation — and left America vulnerable to attack. When it came, George W. Bush stood up for America, albeit sometimes clumsily.  Barack Obama, however, has pulled off the ultimate switcheroo: He’s diminishing America from within — so far, successfully.  He may soon bankrupt us and replace our big merit-based capitalist economy with a small government-directed one of his own design.

A wounded rampaging president can do much damage — and, like Caesar, the evil he does will live long after he leaves office, whenever that may be.

The overgrown, un-pruned power of the presidency to reward, punish and intimidate may now be so overwhelming that his re-election in 2012 is already assured — Chicago-style.

It is interesting to see a number of people now thinking the way I have been since August 2009.  I certainly am not advocating armed revolution.  But I also know that we have the right to it under the Declaration of Indepedence (Read up on it, please. It is important.).

Step one is holding Members accountable with the power of technology (someone should write a book about that!)  The second step is voting.

First, there was US House Rep. Bob Etheridge (D-NC) manhandling a college student in early June…

And now, US House Rep. Ciro Rodriguez (D-TX) completely loses his cool when challenged on the facts by his constituents. According to Mike Flynn at BigGovernment, this meeting with constituents was held “recently“. Arrogance doesn’t come across well on video for Rep. Rodriguez.

I wonder… are Democratic Congressmen learning their divisive and arrogant ways from Nancy Pelosi or Barack Obama?

Seems like these two Members would be more happy in an unchallenged Soviet system than in a democratically-elected Congress?  Just sayin….