TraThis article at The Atlantic seems to suggest that students who go to college in hopes of actually learning something are getting fed-up with protest culture. This would be a welcome change.  Although the Progressive Leftists have become so adept with their bullying and intimidation tactics that few students were willing to go on the record to express their disapproval.
I was struck by something as I read this Facebook post from one of the radicals.

“To all the white & able(mentally/physically) who don’t come to sit-ins(ever, anymore, rarely): all i got is shade for you. [… If] you ain’t with me, then I will accept that you are against me. There’s 6 hums left, I best be seein all u phony ass white allies show-up. […] How you gonna be makin all ur white supremacy messes & not help clean-up your own community by coming and sitting for a frickin hour & still claim that you ain’t a laughin at a lynchin kinda white.”

Translated from the original Idiot: “If you are white and don’t participate in my protests, I will call you a racist. Also, you’re a racist even if you do participate in my protest.”
OK, here’s a theory. Suppose you were a student of mediocre ability who got accepted to a university because of some other factor unrelated to your academic abilities. You get there and you discover the coursework is way over your head. So what do you do? A. Buckle down, work harder, and learn what you can. B. Transfer to another school more closely suited to your abilities. or C. Rail that the difficult classes are actually “racist,” “oppressive to marginalized communities,” and “support a system of white supremacy.” Only one of these options is both easy and assures you of societal approval.

This is apparently, part of mandatory Freshmeat anti-rape indoctrination at the Rochester Institute of Technology. 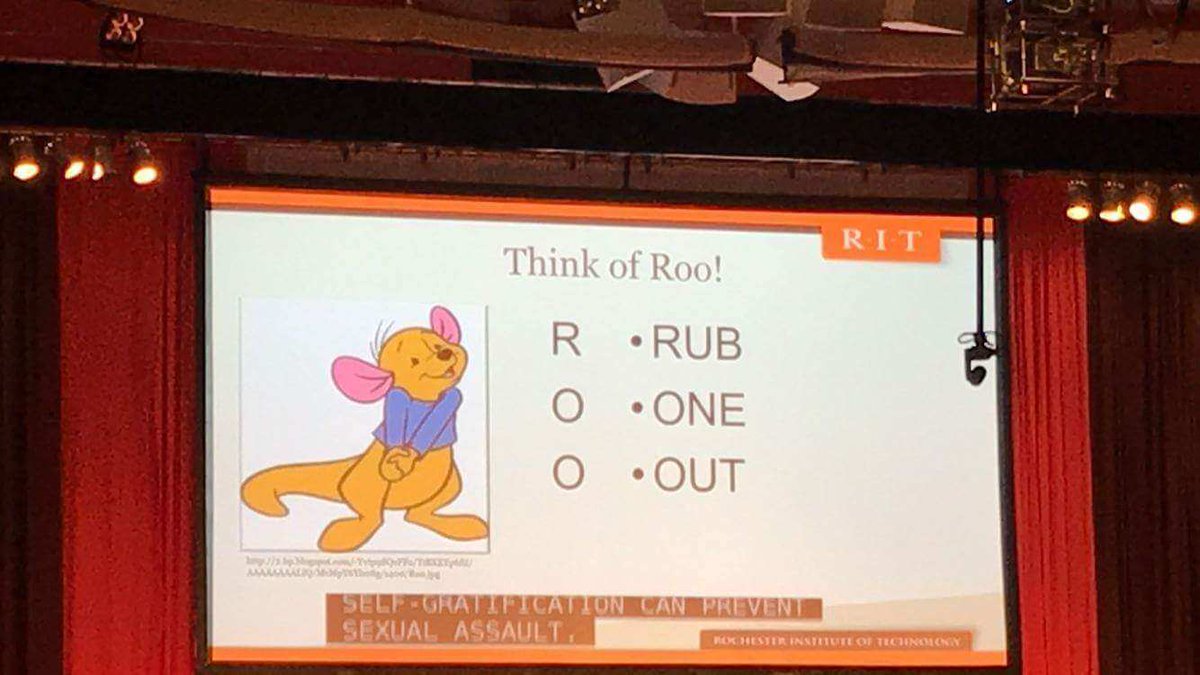 Some of the students, allegedly, festooned the classroom with pictures of Trump, a map of his Electoral College win, “Obama – you’re fired”, and a respectful, accurate statement of Trump’s policy positions.

All pretty innocuous, except for one thing: someone made fun of her gap teeth (which they should not have done – whoever it was; note that we cannot make any assumptions about whom).

I wonder how many times she tried to use her position to cram Social Justice Warrior politics down her students’ throats? I can’t know but, reading between the lines, I wouldn’t be surprised if she did it 24/7.

The University of Missouri … which two years ago knuckled under to race-crazed social justice wankers and spoiled brat trustafarians … has experienced a steep drop in admissions.

Before the protests, the university, fondly known as Mizzou, was experiencing steady growth and building new dormitories. Now, with budget cuts due to lost tuition and a decline in state funding, the university is temporarily closing seven dormitories and cutting more than 400 positions, including those of some nontenured faculty members.

The protests at Mizzou and the resignation of the college president were widely celebrated as a success at the time, but things haven’t worked out well for the school which is now renting out empty dorm rooms for events like the upcoming solar eclipse. It turns out students aren’t eager to attend a school best known for, as the Times puts it, “a hair-trigger protest culture lacking any adult control.”

Actually, they are still celebrated as a success because the destruction of an institution is a demonstration of power and power is what the left is really all about.

One would think that if a college/university really wanted to stand out in the market today, they would brand themselves as a school of academic rigor and tolerance for all viewpoints but not for disruptive, social justice nonsense. Such a school would appeal to students and parents who wanted a good return on their investment. It’s interesting that no large college or university is going in this direction; but instead they are collectively sinking into the mire of social justice nonsense.

Speaking of things destroyed by left-wing jackassery, the NFL is losing advertisers. It’s not just Colin Kaeparnik (last seen traveling to Ghana to bash the white racist American culture that made him a multimillionaire). Let’s not forget how ESPN became a sports-themed version of MSDNC over the last couple of years. They’re not doing so well either.

Airstrip 1, as I reported earlier today, sent a man to prison for posting his nasty, violent thoughts about Muslims on Facebook. I think it is wrong for the state to punish people for speech; even this Posh Being.

Mere days after a Bernie Sanders supporter shot Congressman Steve Scalise and two black members of his police detail, a Connecticut professor posted a Medium article on Facebook declaring: “Let Them F*cking Die.” The professor went on to write that white people are “inhuman a**holes” who still prop up a “white supremacy system,” so black people should not help them if their lives are in danger.

“I’m fed the f*ck up with self identified ‘white’s’ [sic] daily violence directed at immigrants, Muslim, and sexual and racially oppressed people,” Johnny Eric Williams, associate professor of sociology at Trinity College in Hartford, Conn., posted on Facebook Sunday. “The time is now to confront these inhuman a**holes and end this now.”

“Let. Them. F*cking. Die.” For relish, the author added, “And smile a bit when you do. For you have done the universe a great service. Ashes to ashes. Dust to bigots.”

You may wonder how these people end up in Academia, but the truth is, the progressive leftists who run universities love violent, extreme leftists. Bill Ayers ended up with a plush job at the University of Illinois. In their minds, they are all little Che Guevara’s fighting for the noble cause of global socialism.

As for Professor Williams, he wants you to know that… he’s actually the victim.

“The black community is beside itself all over the country with the constant killing. It doesn’t matter what we do, we still be killed, we still go to jail. Just being black and living is a crime. That’s what seems to be the problem.”

He says the article in Medium covered “broader issues” in addition to calling for the violent deaths of white people. This is true, because the main thrust of the article is that blacks, LGBT’s, and others should be indifferent to any suffering or death suffered by white people, should never be civil or decent to white people in any way. (They’re way ahead of you on that at Evergreen State, maybe you should see if they have any openings.) The article’s “enlightened” view is that you only owe civility and decency to people who share your racial, cultural, or sexual identity. Morality isn’t individual, it’s collective.

Reading the comments to that Medium article, by the way, is pretty indicative of where the Social Justice Left is these days.

Remember that UVa “campus rape culture” hoax that bubbled up in 2014? Recent news is that Rolling Stone will pay settlement damages to the fraternity they accused.

A source involved at the national level with the fraternity, Phi Kappa Psi, tells TheDC that Rolling Stone will pay $1.65 million to settle the defamation suit…

In the piece, “A Rape on Campus,” Erdely relayed the story of Jackie Coakley, a Virginia woman who claimed she was brutally raped by a group of Phi Kappa Psi fraternity members during a party in Sept. 2012.

The magazine’s decision follows a settlement in April with Nicole Eramo, a University of Virginia associate dean who was also smeared in the article, which was written by Sabrina Rubin Erdely…

Erdely portrayed Eramo as dismissive of Coakley’s case. But it was later revealed that Coakley not only fabricated the attack by the fraternity members but that Eramo took her allegations seriously at the time she made them.

A jury in Virginia awarded Eramo $3 million in damages — $2 million from Erdely and $1 million from Rolling Stone.

I don’t know what has happened to the original accuser, Jackie Coakley?

…when it comes to dip into their pockets.

Old and busted: Lou Reed is so cool. He did a song about trannies that makes the squares uptight!

New hotness: Lou Reed is so bigoted. He did a song about trannies that makes us SJWs uptight!

The Guelph Central Student Association wrote “We now know the lyrics to this song are hurtful to our friends in the trans community and we’d like to unreservedly apologize for this error in judgement.”…

In a further statement a spokesperson said: “The lyrics, ‘and then he was a she,’ devalues the experiences and identities of trans folks.

Some skeptics (or, as the dogmatic left would call them, “denialists”) wrote a hoax “Academic” paper arguing that the penis is a social construct and also responsible for Climate Change. It was accepted and published in a peer-reviewed Acadamic Journal.

Anatomical penises may exist, but as pre-operative transgendered women also have anatomical penises, the penis vis-à-vis maleness is an incoherent construct. We argue that the conceptual penis is better understood not as an anatomi- cal organ but as a social construct isomorphic to performative toxic masculinity. Through detailed poststructuralist discursive criticism and the example of climate change, this paper will challenge the prevailing and damaging social trope that penises are best understood as the male sexual organ and reassign it a more fitting role as a type of masculine performance.

Penises are problematic, and we don’t just mean medical issues like erectile dysfunction and crimes like sexual assault. As a result of our research into the essential concept of the penis and its exchanges with the social and material world, we conclude that penises are not best understood as the male sexual organ, or as a male reproductive organ, but instead as an enacted social construct that is both damaging and problematic for society and future generations. The conceptual penis presents significant problems for gender identity and reproductive identity within social and family dynamics, is exclusionary to disenfranchised communities based upon gender or reproductive identity, is an enduring source of abuse for women and other gender-marginalized groups and individuals, is the universal performative source of rape, and is the conceptual driver behind much of climate change.

When “science” has been reduced to this, one should wear the label of “Denier” proudly.

Students are paying (going into debt) to the tune of $22,000 per year to receive wisdom from learned scholars such as this woman:

An assistant professor at California State Polytechnic University argues in a recent academic research paper that eastern fox squirrels are subjected to a “gendered, racialized, and speciesist” form of media bias.

Teresa Lloro-Bidart, an associate professor of liberal studies at Cal Poly, argues in a recently published postmodernist research paper that eastern fox squirrels are on the receiving end of racially-charged media bias. Lloro-Bidart claims that she worked towards such a conclusion by analyzing the coverage of eastern fox squirrels through “feminist posthumanist,” and “feminist food studies” lenses.

What is it with women with hypens in their names? Why are they so often nuts? (No offense to the racially marginalized squirrels.)

Update: Ace found an academic who has written a scholarly treatise about … I am not making this up… talking to an imaginary ghost of himself.