I recommend Gareth Porter’s June 22 article on The American Conservative, How America Armed Terrorists in Syria. It tells a story that I already knew (at a high level) – supported by a wealth of details that I didn’t.

In the rest of this post, I’ll share my notes on that and some other articles, re-telling the story with many fewer details. But it will still be a long post. First, a couple of things to keep in mind:
END_OF_DOCUMENT_TOKEN_TO_BE_REPLACED

On a fun note…Milo had a Coming Out Conservative event in New York.

I’m sure GP readers can relate to idea that nowadays, it is MUCH harder to come out as conservative than as gay.

…because the sun is shining, most of us still have our health and families, and Hillary isn’t President.

No one combines Corruption, Socialism, Cronyism and Shrillness like her. Imagine if that harpy were ranting at you every day from the White House about why we need to expand Obamacare, have ground troops in Syria, shut down the alt-media, end the 2nd Amendment, etc. With her ill-calculated faux-sincerity.

UPDATE: Judicial Watch is still on the Benghazi and “Clinton e-mail” scandals. They’re not over. More e-mails are still being uncovered. Hillary should still be prosecuted, and FBI Director Comey’s misreading or mis-application of the law (in giving her a pass) is still crony-istic and astounding.

…who sought-and-received such special treatment that now, in her own person, she embodies the most corrupt, disgraceful and dangerous aspects of American political life.

Allen B. West gives a summary:

[…]
Consider that just last week, there was a secret, private meeting between former President Bill Clinton and U.S. Attorney General Loretta Lynch…Over the weekend, quietly, Hillary Clinton visited FBI headquarters and then came out to give an interview with MSNBC’s Chuck Todd — who stated he had inside information there would be no charges. Then…Director Comey announces a press conference — as the pre-flight checks were being conducted on Air Force One, preparing to fly President Obama and Hillary Clinton on a campaign ride to North Carolina…Comey announces no charges, and Air Force One takes off. Barack Obama is flying, on taxpayer dollar, not with someone under criminal investigation — but a recently-exonerated Hillary Clinton. This, Ladies and Gents, is the “policy of political corruption” on full display.
[…]
When Barack Obama and Hillary Clinton stood together on that stage [in North Carolina last weekend], you saw two people who abandoned Americans to die and lied about it.

In short, and even if we leave aside the Benghazi deaths, Hillary Clinton is 100% guilty of crimes of negligence – and obstruction of justice (lying to prevent investigation). She was given a giant pass, for no reason except politics.

Courtesy of ZH, a picture is worth a thousand words:

Vladimir Putin and Xi Jinping stand together – away from President Obama.

Other news: Jonathan Gruber, Obamacare’s architect, brags about voter “stupidity” (his word) and how excellently he exploited it:

“Lack of transparency is a huge political advantage,” says the MIT economist who helped write Obamacare. “And basically, call it the stupidity of the American voter or whatever, but basically that was really, really critical for the thing to pass.”

Ed Morrissey’s piece gives you the video, and Ed adds:

Democrats insisted that CBO’s initial scoring showed that the bill was deficit-neutral in its first ten years, thanks to…dodges like trawling revenue before making outlays a few years later. How much else did Democrats lie to get that initially positive scoring? How much else are Democrats still hiding about the ACA and the HHS implementation of it?

And now HHS tells us that they’re projecting Obamacare’s 2015 enrollment to be kind of a failure.

Last, but not least: Yes, the media helped Obama cover up his flailing on Benghazi.

The day after the Benghazi attack, Obama gave an interview to Steve Kroft of 60 Minutes (CBS) where he pointedly refused to call the attack terrorism. But later, in a debate with Mitt Romney, Obama claimed that he had always been prompt in calling it terrorism. Obama spoke falsely. And CBS helped him, by hiding the relevant interview clip – until after the election.

UPDATE: A report that when Democrat senators need to know White House plans or positions, they ask MSNBC. (Which shows Obama’s isolation, as well as MSNBC’s deep subservience to the White House.) Via Citizens News.

Lifelong Hillary supporter Eleanor Rodham Clift (a Democrat pundit who has grown older but not wiser) has been rightly ridiculed for comparing the Benghazi Terror Attack to a housefire, and saying that Ambassador Stevens wasn’t murdered but “died of smoke inhalation.”

She’s not backing down from her stupidity.

The Left continues to mock Benghazi as a phony scandal, which it is, provided all of the following things are true:

As long as all four of those things are true, then the left is correct in calling Benghazi a phony scandal.

Update: Below the fold, Trey Gowdy takes on Democrat criticisms that Benghazi is being politicized by shoving it right back into their smug, snotty faces.

END_OF_DOCUMENT_TOKEN_TO_BE_REPLACED

The Democrats are really, really upset that the Party of Opposition is trying to get to the truth of the events of 11 September 2012 in which four Americans were brutally killed by Islamic terrorists, the Obama Administration refused to send help while they were under attack, and subsequently lied about what happened.

Harry Reid will weigh in as soon as he finds a way to blame Benghazi on the Koch Brothers.

They aren’t happy about this. They definitely don’t want to Republicans looking into this. If this is, as Democrats claim, “a phony scandal,” why all the screeching and obstruction? If Obama and Hillary did everything right on Benghazi, and never lied about any of it … then turning over all their documents and fully cooperating would prove it.

After almost two years (dude), Republicans are finally convening a Select Committee to investigate the events of 11 September 2012 in Benghazi; when four Americans died and the next day the President went to a party in Las Vegas.

It would be a bad idea for the Republicans to focus too much on who wrote the talking points blaming the attack on a YouTube video. Even the die-hard Obama Cultists know that the Administration blamed the YouTube video because admitting that Americans had been killed in a terrorist attack less than a month before the Elections would have looked bad for the President. (They know this is true, even if they won’t admit it. And they are not in the least troubled by it. It’s OK when their politicians lie.)

But the real stinging question – a question the administration successfully evades by playing up the talking points – is the question of why no help was sent to the Benghazi consulate when it was under attack. The terrorist attack lasted nearly eight hours, and the consulate issued repeated calls for help that went unanswered. Military assets in the region that could have helped rescue them went unused.

“Why were those people left to die?” is a much more profound question than “Which bureaucrat decided to blame the attack on a YouTube video?” We already know Obama is a liar. 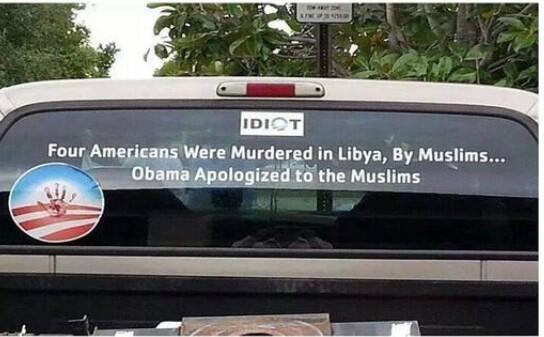 A Democrat Congressman from California is saying that Democrats will refuse to participate in the Special Committee to Investigate Benghazi, calling it “a colossal waste of time.” And by “colossal waste of time,” he means, “potentially embarrassing to both our current president and our 2016 front-runner should the public ever get wind of what a massive clusterfrak of lies and incompetence the Benghazi incident really is.”

Mrs. Clinton announces in a paid forum, responding to a question from a car salesman, with no opportunity for follow-up questions… says that what happened in Benghazi is “her biggest regret.”

When I think about my own regrets, they’re like… not working harder in high school, not going to a different college, not hooking up with the tall redhead senior year. None of my regrets involve leaving four people to die in a terrorist attack and then lying about it.

Ever wonder where Mrs. Clinton would be without Mr. Clinton? Obviously, she never would have been a senator or secretary of state without his coat-tails. (Anymore than George W. Bush ever would have president had he not won the genetic Powerball.) Maybe chair of a Womyn’s Studies department somewhere.