Merry Christmas everyone and thanks for your support throughout the year.  I’d like to share two of my favorite passages from the Bible that honor of the birth of Jesus Christ.

1:1In the beginning was the Word, and the Word was with God, and the Word was God. 1:2The same was in the beginning with God. 1:3All things were made through him; and without him was not anything made that hath been made. 1:4In him was life; and the life was the light of men. 1:5And the light shineth in the darkness; and the darkness apprehended it not. 1:6There came a man, sent from God, whose name was John. 1:7The same came for witness, that he might bear witness of the light, that all might believe through him. 1:8He was not the light, but came that he might bear witness of the light. 1:9There was the true light, even the light which lighteth every man, coming into the world. 1:10He was in the world, and the world was made through him, and the world knew him not. 1:11He came unto his own, and they that were his own received him not. 1:12But as many as received him, to them gave he the right to become children of God, even to them that believe on his name: 1:13who were born, not of blood, nor of the will of the flesh, nor of the will of man, but of God. 1:14And the Word became flesh, and dwelt among us (and we beheld his glory, glory as of the only begotten from the Father), full of grace and truth. (John 1:1-14)

2:1Now it came to pass in those days, there went out a decree from Caesar Augustus, that all the world should be enrolled. 2:2This was the first enrolment made when Quirinius was governor of Syria. 2:3And all went to enrol themselves, every one to his own city. 2:4And Joseph also went up from Galilee, out of the city of Nazareth, into Judaea, to the city of David, which is called Bethlehem, because he was of the house and family of David; 2:5to enrol himself with Mary, who was betrothed to him, being great with child. 2:6And it came to pass, while they were there, the days were fulfilled that she should be delivered. 2:7And she brought forth her firstborn son; and she wrapped him in swaddling clothes, and laid him in a manger, because there was no room for them in the inn. 2:8And there were shepherds in the same country abiding in the field, and keeping watch by night over their flock. 2:9And an angel of the Lord stood by them, and the glory of the Lord shone round about them: and they were sore afraid. 2:10And the angel said unto them, Be not afraid; for behold, I bring you good tidings of great joy which shall be to all the people: 2:11for there is born to you this day in the city of David a Saviour, who is Christ the Lord. 2:12And this is the sign unto you: Ye shall find a babe wrapped in swaddling clothes, and lying in a manger. 2:13And suddenly there was with the angel a multitude of the heavenly host praising God, and saying,  2:14Glory to God in the highest,  And on earth peace among men in whom he is well pleased. 2:15And it came to pass, when the angels went away from them into heaven, the shepherds said one to another, Let us now go even unto Bethlehem, and see this thing that is come to pass, which the Lord hath made known unto us. 2:16And they came with haste, and found both Mary and Joseph, and the babe lying in the manger. 2:17And when they saw it, they made known concerning the saying which was spoken to them about this child. 2:18And all that heard it wondered at the things which were spoken unto them by the shepherds. 2:19But Mary kept all these sayings, pondering them in her heart. 2:20And the shepherds returned, glorifying and praising God for all the things that they had heard and seen, even as it was spoken unto them. (Luke 2:1-20)

Finally, God Bless America and our servicemen and women, and their families, serving around the World in the name of freedom and liberty.

Saxby — the original PatriotPooch — wishes everyone a very Merry Christmas from South Carolina. 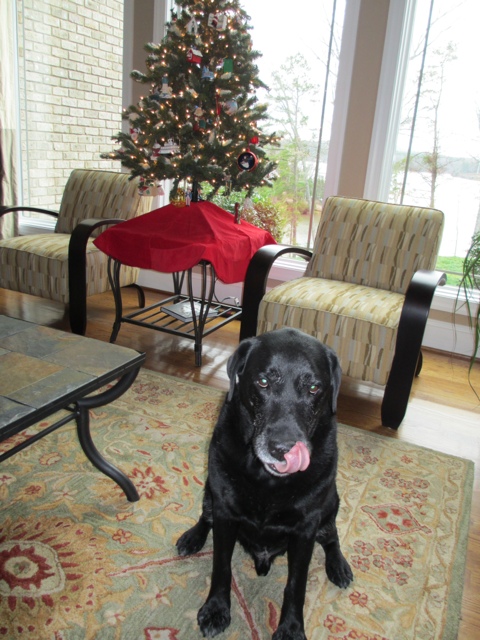 Good tidings for all. And a very special Merry Christmas to our men and women in the US Armed Forces who have recently come home from Iraq. God Bless you and your families.

John (PatriotPartner) & I also wish you and yours a very Merry Christmas! 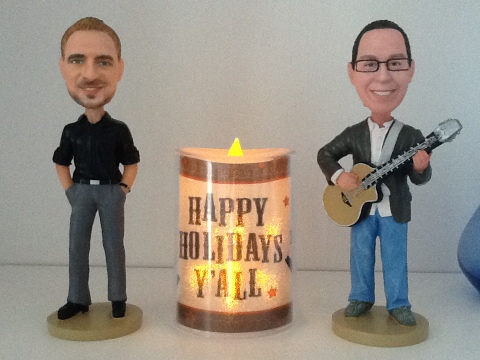 I keep forgetting to post these photos taken of PatriotManse by PatriotPartner.Â  We have the outside decorating down to a science and can complete it in one afternoon.Â Â  The Christmas Tree, on the other hand, requires two weekends and help from PatriotPhillyPal, Mark. 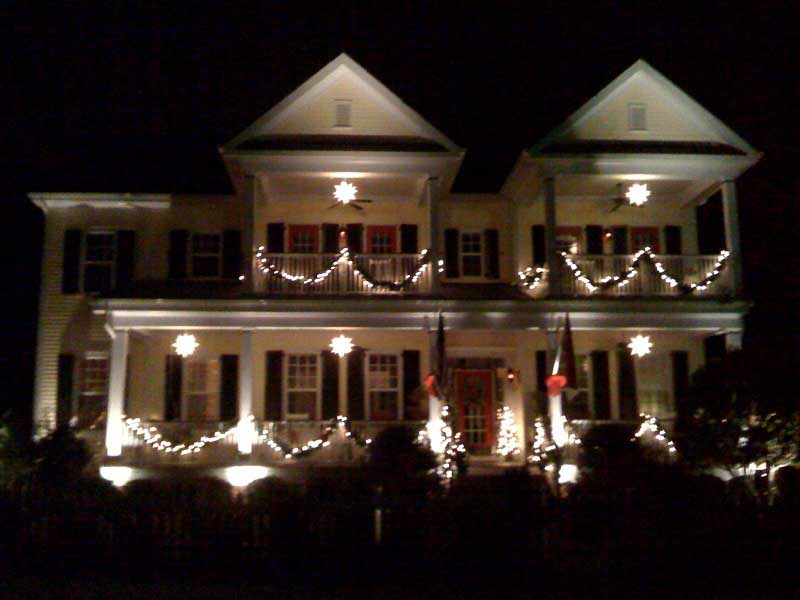 PS — It is close to 60 degrees here in Charlotte today.Â  And I just had to turn on the A/C.Â

In the meantime….. Dude, Where’s My Global Warming?

9Â That was the true Light, which lighteth every man that cometh into the world. 10Â He was in the world, and the world was made by him, and the world knew him not. 11Â He came unto his own, and his own received him not. 12Â But as many as received him, to them gave he power to become the sons of God, even to them that believe on his name: 13Â Which were born, not of blood, nor of the will of the flesh, nor of the will of man, but of God.

14Â And the Word was made flesh, and dwelt among us, (and we beheld his glory, the glory as of the only begotten of the Father,) full of grace and truth.

Merry Christmas from my family to yours.

Let us all pray for peace and love for each other and for strength through these difficult world times.

Thanks to all of our readers who are a part of our unique community in the blogosphere.

Only a few days left. The 400,000th care package will go out this weekend. An excellent group of volunteers dedicated to helping our troops. This is especially important at this time of year with Christmas only 16 days away. If you can spare a few dollars, please give generously!

h/t – Ace of Spades for reminding me

We, the residents of North Carolina, proudly deliver this year’s Christmas Tree to you, the American People.

First lady Laura Bush kicked off the holiday season by standing out in the rain to receive this year’s White House Christmas tree.

A horse-drawn wagon pulled the 20-foot Fraser fir up to the White House on Sunday as Bush was waiting under an umbrella. The tree will decorate the Blue Room.

Jessie Davis and Russell Estes, owners of River Ridge Tree Farms in Crumpler, N.C., where the tree was grown, joined the first lady, along with their families.

The North Carolina Farm Bureau says River Ridge also will provide about 25 smaller trees for the White House, including the ones for the offices of the president and vice president.

All together now, folks…. say it with me:  “It is all George Bush’s fault!”

Hundreds of Christian pilgrims celebrated Jesus’ birth on Tuesday in the West Bank town where he was born, in an atmosphere made markedly cheerier by the renewal of Israeli-Palestinian peace talks after years of bloody conflict.

By midday, the ancient Church of the Nativity was packed with tourists waiting in line to see the grotto that marks the traditional birthplace of Jesus.

The visit to Bethlehem was a first for Kiel Tilley, 23, a science teacher from Charlevoix, Mich.

“It’s very powerful and meaningful to me,” Tilley said. “It’s very moving to visit a place which I always read about in the Bible.”

The relaunch of Israeli-Palestinian peace talks at a U.S.-sponsored conference last month reassured him before his trip, he said.

“I’m always in fear something would happen,” Tilley said. “But the peace process made me feel safer.”

In those days a decree went out from Caesar Augustus that all the world should be enrolled.  This was the first enrollment, when Quirin’i-us was governor of Syria.  And all went to be enrolled, each to his own city.

And Joseph also went up from Galilee, from the city of Nazareth, to Judea, to the city of David, which is called Bethlehem, because he was of the house and lineage of David, to be enrolled with Mary, his betrothed, who was with child.

And while they were there, the time came for her to be delivered.  And she gave birth to her first-born son and wrapped him in swaddling cloths, and laid him in a manger, because there was no place for them in the inn.

And in that region there were shepherds out in the field, keeping watch over their flock by night.  And an angel of the Lord appeared to them, and the glory of the Lord shone around them, and they were filled with fear.  And the angel said to them, “Be not afraid; for behold, I bring you good news of a great joy which will come to all the people; for to you is born this day in the city of David a Savior, who is Christ the Lord.  And this will be a sign for you: you will find a babe wrapped in swaddling cloths and lying in a manger.”

And suddenly there was with the angel a multitude of the heavenly host praising God and saying, “Glory to God in the highest, and on earth peace among men with whom he is pleased!”

I’d like to add one thought this year as an addendum to last year’s Christmas Day posting, which is one of my favorite Biblical passages by the way.  When I was growing up in rural Pennsylvania, my Mom and I attended a very historic old Episcopal Church.   At the end of every Christmas Eve midnight service, our vicar used to read another favorite Biblical passage of mine.  He would read it by solo candlelight as the rest of the church was dark.  When he closed the Bible, he would begin to light all of the rest of the candles in the church as his wife sang a lovely rendition of “Silent Night” as the church slowly lit up.