The father of a dead lesbian is claiming that Roy Moore caused her suicide because of his “homophobic comments.” (Warning, stupid obnoxious autoplay).

I don’t really believe anyone commits suicide because some politician holds a negative opinion of them. If they do, that’s sort of on them.

If Roy Moore wins, I don’t think it’s because voters like him. I think, frankly, it’s a reflection of how much people really hate Democrats and the Democrat Media.  Frankly, Democrats and the media elite have sneered so often at middle America, and especially the southeastern quadrant, that they have earned the enmity.  Roy Moore may be a taint on southern values, but Doug Jones will wage unrelenting on them.

PDT has appointed gay dude Richard Grenell as Ambassador to Germany. This will mean nothing to the “gay activist groups” who celebrated every LGBTQQIP2SAA the Obama Administration ever made as tantamount to the Emancipation Proclamation. The activist front groups must continue to paint the president as anti-gay in order to raise funds and preserve their cherished seat at the Democrat Table of Diversity.

Also, those Germans can get pretty kinky. Have fun, ambassador.

The University of Missouri … which two years ago knuckled under to race-crazed social justice wankers and spoiled brat trustafarians … has experienced a steep drop in admissions.

Before the protests, the university, fondly known as Mizzou, was experiencing steady growth and building new dormitories. Now, with budget cuts due to lost tuition and a decline in state funding, the university is temporarily closing seven dormitories and cutting more than 400 positions, including those of some nontenured faculty members.

The protests at Mizzou and the resignation of the college president were widely celebrated as a success at the time, but things haven’t worked out well for the school which is now renting out empty dorm rooms for events like the upcoming solar eclipse. It turns out students aren’t eager to attend a school best known for, as the Times puts it, “a hair-trigger protest culture lacking any adult control.”

Actually, they are still celebrated as a success because the destruction of an institution is a demonstration of power and power is what the left is really all about.

One would think that if a college/university really wanted to stand out in the market today, they would brand themselves as a school of academic rigor and tolerance for all viewpoints but not for disruptive, social justice nonsense. Such a school would appeal to students and parents who wanted a good return on their investment. It’s interesting that no large college or university is going in this direction; but instead they are collectively sinking into the mire of social justice nonsense.

Speaking of things destroyed by left-wing jackassery, the NFL is losing advertisers. It’s not just Colin Kaeparnik (last seen traveling to Ghana to bash the white racist American culture that made him a multimillionaire). Let’s not forget how ESPN became a sports-themed version of MSDNC over the last couple of years. They’re not doing so well either.

Toronto’s annual gay pride parade this year saw the shocking spectacle of a group of hard-left, predominantly white activists trying to silence Middle Easterners from speaking out against the oppression faced by the LGBT+ community in Muslim countries.

Actually, thet’s not at all shocking to anyone who understands how the left works, or what the goals of the left actually are. But anyway….

A group of activists from Muslim-majority countries, including former Iranian political prisoners, marched in the parade under the banner of the International Center for Human Rights (ICHR). The ICHR is a group dedicated to opposing human rights abuses by dictatorships in general and the Islamic Republic of Iran in particular. They marched in Toronto Pride alongside LGBTory, a group which supports those who are politically right-wing and part of the LGBT community.

The marchers bearing placards bearing signs such as “Iran Executing Gays since 1979” and “Qatar Whips and Hangs Gays” were greeted by a gang of mostly masked demonstrators from the far-left Antifa faction. The far-left activists tried to block the ICHR group and prevent them from marching.

A young man from Antifa accused the ICHR of “emboldening” anti-Muslim hate, saying “Anti-Muslim racists look at you and they are emboldened, do you understand?”

Uh-huh. Well, the people the “antifascist left” are suddenly enamored with just brutally murdered a man for being too good-looking and flamboyant. (And, I’m guessing, gay.)

An fine young Salvadoran DREAMer beats a Mohammedan to death with a baseball bat. Hate crime or no?

The police say “no,” but they’re all part of the white male patriarchy.

Lesbian and Gay Bullying Totalitarians (LGBT) are demanding rainbow-painted cross-walks in major cities across the USA, as a token of societal submission to their political power.

It may seem harmless, except for the additional cost of maintenance to taxpayers, but you know, every other group is going to demand their own crosswalks painted in their tribal colors. Brown and Black for the BLM racists. White, orange, and green for the Mexican colonists.  Pink for Susan Koman Breast Cancer Scammers.

The left is obsessed with symbolism. And they demand that everyone else pay tribute.

On a related note, the rainbow flag (‘Old Gloria’) has been deemed racist, and is now being replaced, officially (and with the blessing of the Democrat Party) by a new ‘Crayola Box’ flag that includes black and brown. Because obviously, the old flag was only for white gay people. So, all of you old queens who’ve been waving this symbol of White Supremacy around for so many years should immediately report to your local Democrat Commissarr to denounce yourselves. 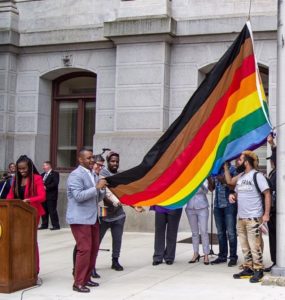 Meanwhile, back at the pride parade: “Hmm, there’s a lot of homophobic people out there, how should I dispel stereotypes and show them I’m just a normal guy?” NSFW

Poor gay leftists, did you really think you could have a Pride Parade and not be disrupted by angry black racists?  They’re just showing up to remind you that your place in the Coalition of the Oppressed is under theirs.

While the Democrat Left – LGBT Coalition in America are so desperate to illustrate oppression that they resort to fake hate crimes (see below), spreading total bullshirt accusations that the VP wants to electrocute gay kids, and crying that for a Christian to decline to bake a cake for a gay wedding is a million times worse than anything Hitler ever did, there may actually be a genocide against gay people unfolding in Chechnya, and none of them care.

Chechen police are reportedly urging parents to kill their gay children, according to survivor testimony from one man held in a “gay torture camp” in the country.

Authorities have been telling parents of gay men to “sort it out” or the state will intervene, the victim, who has not been identified, claimed.

The latest account of systematic LGBT persecution comes just a month after Chechen authorities allegedly rounded up more than 100 men who were suspected to be gay. Many were tortured and at least four are alleged to have been killed, according to a Russian newspaper and human rights campaigners

Now granted, the reports are very sketchy and unreliable. But that’s sort of the point, if there were rumors of genocide in other countries, wouldn’t they be worth investigating?

Probably because it would be happening in a Muslim territory under a devout Muslim leader; it would be bad for the Coalition of the Oppressed to point out that the Oppressed Muslims want to murder the Oppressed LGBT’s.  And it’s difficult to find a “Bash Trump” angle to it, so it is politically unimportant.

I seem to recall reports of gay oppression in Uganda getting a fair amount of coverage (but then, that provided an opening to bash Christians).

Ace notes that the Antifa Wing of the Democrat Coalition is having second thoughts about engaging in violent protest ever since Skanksquatch (a.k.a. “Moldylocks”) got punched at one of their recent Riots Against Free Speech and Basic Decency. Also because 4Chan Detectives identified the cowardly POS who was whacking free speech supporters with a bike lock. (“How dare they dox one of us. It’s so unf-a-a-a-a-a-a-a-a-a-a-i-r!“)

Others in the Antifa Wing of the Democrat Coalition have suggested they should arm up and learn to fight better. But still others find this approach problematic because it would reaffirm manliness and other cis-normative social values.