My good friend and Match Game celeb regular, Tony Katz, is on a new mission.  And I’m going to help as much as I can.

He is launching a new late-night talk show, from a conservative perspective.  I LOVE the concept.

Tony Katz Tonight is what happens when Politically Incorrect meets Playboy After Dark. Upbeat interviews, honest discourse and huge laughs – without all the PC political garbage. Please, go to our IndieGogo campaign and donate. We have great swag to give away for all our contribution levels including customized videos, mugs, t-shirts, cigars and your ticket to attend a Tony Katz Tonight taping and be a part of the show!

I’ve donated, so please do the same.  This is the ultimate in pop culture, conservative crowdsourcing fun! 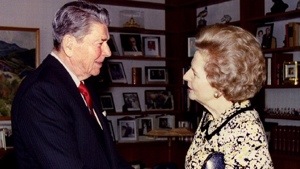 When the grassroots effort began which led to me strongly considering a challenge to Lindsey Graham for US Senate in 2014 — I promised that I would conduct my efforts in a transparent manner through social media.

I’ve been relatively quiet about my decision making process this week.

That was by design. After the enormous reception I received at CPAC, my team of advisors and I thought it best that we keep a lower profile this week.

This has allowed us to do the quiet due diligence that we need in order to make a final decision on whether to enter the race.

I promised that there would be a decision by mid-April, and there still will be.

I’d just ask everyone’s patience with me as I consult with my family, friends and members of the conservative grassroots that I respect dearly.

Thanks and have a great weekend.

The interview touches on the key issue of Paul’s recent filibuster. In my own words: If the government can execute American citizens, on American soil, pre-emptively (without an active crime or combat situation and without due process), simply by designating them ‘terrorists’ first… well, who’s a terrorist? Please note that:

With such examples, we see that the Obama – Big Government – Big Banking nexus is indeed prone to labeling its domestic ideological opponents as ‘terrorists’.

Fortunately and as we know, the Obama administration did answer Paul’s filibuster with a clarification of the limits on domestic drone strikes.

[^^I can’t recall Biden’s GOP counterparts – Vice President Cheney, or VP candidates Sarah Palin and Paul Ryan – ever saying that their domestic, non-violent political opponents were terrorists. If you think any of them did, I invite you to find a solid reference and post it in the comments. Quotes about Bill Ayers won’t count, since Ayers was actually violent for awhile.]

UPDATE: Rand is on a roll. “For liberty to expand, government must shrink.” Link is timed to that line, but watch the whole thing.

From last Friday on Piers Morgan (ugh), McCain complains about the flak he’s been catching, for all the flak that he himself spewed on Rand Paul’s recent filibuster:

“Well, you know, I am always intrigued by the fact that when I disagree with my own party leadership, my own president — like saying that Donald Rumsfeld ought to resign, [or] we need to do the surge — then I’m a brave maverick,” McCain said. “When I’m taking on others, then he’s just an angry old man.”

Or at least they should be able to, without your whining and pissing on them like a cranky old man, um, teenager.

The title is Jonah Goldberg’s. Apologies for forgetting who/what tipped me off to his recent speech. It wanders, but covers much interesting ground.

END_OF_DOCUMENT_TOKEN_TO_BE_REPLACED

Rand Paul’s filibuster ended yesterday, after 13 hours. Neither Bruce nor I were clear on how to turn off GP’s post that was counting it, so…it’s gone. We executed it (so to speak). But where did America end up?

I think that means: according to the Senate, if Obama decides that you are a “suspected terrorist”, he could execute you and your family in a drone strike on your home. At least, the question is open. Obama’s America, Forward!

UPDATE (from the comments): heliotrope informs us that Senator Paul has just received a letter from Attorney General Holder, writing that the president does NOT “have the authority to use a weaponized drone to kill an American not engaged in combat on an American soil.” That’s better.

UPDATE: Republican senators McCain and Graham are clueless as ever, while liberal comedian Jon Stewart praises Rand Paul, sort of.

Busy with a number of projects today, including entertaining Bruce with whom I just had a nice lunch and to whom I just showed a gas station selling a gallon of regular for over $5, but did want to remind our readers despite the CPAC dustup, many conservative institutions favor the inclusion of gay conservatives.

Shortly, after returning home (from spending my early afternoon with Bruce where CPAC came up), I caught this headline on the National Review’s homepage:

On Sunday, Bruce reported that “nothing has changed [since] The CPAC Board voted before CPAC 2012 to remove GOProud as a sponsoring organization.” Today, the flagship conservative magazine offered “Five reasons CPAC should embrace the gay conservative group.”

CPAC’s decision to exclude this gay conservative group is not sitting well with all movement conservatives. Daniel Foster, the National Review’s news editor, makes a strong case for inclusion:

GOProud is consistently big-C “movement” conservative on the important issues — especially on fiscal policy and the size of government, but also on social issues such as abortion. After all, GOProud was founded by a couple of Log Cabin Republicans dissatisfied with that group’s Main-Street-partnership-style centrism. This alone is a pretty good reason for their inclusion at CPAC. But arguably more interesting, and more important for a powwow that’s ostensibly about making conservative advocacy more effective, is GOProud’s lower-case conservatism.

Read the whole thing.  Foster holds that “the move against GOProud does seem to be all downside.” Indeed.

Just another reminder about the broad-based conservative movement.  The current organizers of CPAC don’t speak for all conservatives.

To some degree, I regret not having blogging during the fiscal cliff negotiations.  They may, to be sure, represent a low point for congressional Republicans, but they may also represent a turning point.  The once-divided House Republicans emerged unified from their Williamsburg retreat.  And Congress has now disposed of one of the few issues Obama emphasized in the campaign — and demagogued after his victory — increasing taxes on the wealthy.

He will not longer be able to use that issue (i.e., “tax the rich) against Republicans as effectively as he did in the campaign.  And he now gives Republicans a chance to remind Americans about the second part of his “balanced approach” to deficit reduction: spending cuts.

Las Friday, we learned that despite his successful reelection campaign, President Obama does not have the power he needs to “fundamentally” transform the nation as he would like.  The D.C. Circuit Court of Appeals invalidated the incumbent’s attempt at constitutional overreach, striking down his use “the Constitution’s recess appointment power to make appointments despite the absence of a recess” to appoint members of the National Labor Relations Board (NLRB)

This ruling will make it relatively easy for employers to challenge all the pro-union rulings the NLRB has made since Obama announced the appointments.  The Democrat cannot willy nilly put policies into place increasing regulation and giving more power to favored special interests.

And despite a largely favorable press, Obama’s current approval rating hovers just below that of George W. Bush at a similar point in his term, indeed, as George Will observed, the Democrat enjoys “the lowest approval rating (according to Gallup, 50 percent, four points lower than that of the National Rifle Association) of any reelected president when inaugurated since World War II”, with the eminent pundit opining that the incumbent’s “contradictory agenda [is] certain to stimulate a conservative revival.” END_OF_DOCUMENT_TOKEN_TO_BE_REPLACED

I’m at the NRI Summit in DC this weekend. It’s great catching up with blogger friends. And I’m finally meeting some of the folks I love to read everyday from the National Review.

It’s hard for me to listen and blog, so while Gov. Scott Walker and US Sen Ted Cruz speak a lunch, I’m just going to listen.