The famous Social Justice Warrior drunkenly rants at the cops who had to arrest him for when he bothered them with his drunken ranting:

Cornered, he plays the “I’m an American” card and as well, he plays his Rich White Male Privilege cards several times. Or tries to. So enlightened!

After seeing that, you may want something more uplifting. Here’s just some stuff I stole from other sites, mostly AoSHQ, and some hunky firemen and puppies. Because Friday.

END_OF_DOCUMENT_TOKEN_TO_BE_REPLACED

Much as I am reluctant to discuss too much of my private life on this forum, I would like to introduce someone kind of special. About a month ago, I found this little creature scrounging for food around the neighborhood dumpster.

It took a couple of days to earn his trust enough to get close enough to catch him. Originally, the plan was to foster him until a home could be found. But he kind of grew on me. Here he is now:

END_OF_DOCUMENT_TOKEN_TO_BE_REPLACED

We’re already in the midst of the second week in February, which means it is once again time for the annual Westminster Kennel Club Dog Show in New York City.   That interests me mainly because I’m a “dog person” and although I don’t follow these sorts of things closely enough to care about any of the favorites or most of the technicalities involved, I do enjoy tuning in sometimes on TV when there’s nothing else worth watching (which is often the case) just to cheer on my favorite breeds and breed groups.  Although I enjoy seeing the dogs in those breeds, I find the whole world of dog shows more than a little odd, which is why it was more than ripe for parody in the 2000 Christopher Guest comedy Best in Show.  Plus, as a dog owner, I have more than a few problems with any sort of beauty contest for dogs which my beautiful and charming mutt would be unable to enter.

Regardless of which dog is named “Best in Show” in New York this week, I saw this story a few weeks ago about the ten most popular dog breeds in the U.S.   Although, this is just one list and an imperfect one at that (some of the flaws in the method employed are explained here), personally I found it somewhat encouraging that even at the start of Obama’s second term, the Labrador Retriever is still the most popular dog breed in America, followed by the German Shepherd and the Golden Retriever.  I like the fact that three large breeds are the most popular.   These are not dogs for wimps.  Although Goldens and Labradors are both known for their sociability and for being great family dogs, they are also good hunting dogs, and great companions for athletic people who spend a lot of time outdoors; German Shepherds are also great active dogs, known for their loyalty and intelligence, and they are great guard dogs.  In fact, the top four dogs are the same as they were in 2002.

What’s more intriguing is the shifting positions of other breeds and dogs further down the list in the last 10 years.   Among the top 10 dogs, I’m puzzled by the rise in popularity of the Bulldog (#18 in 2002, #10 in 2007 and #5 in 2012), but I suspect it is connected to the rise in popularity of the Rottweiler (#13 in 2002 and #9 in 2012), the Doberman (#23 in 2002 and #12 in 2012), and the French Bulldog (#58 in 2002 and #14 in 2012).   My initial impression of this trend is that in the Obama economy, people worry more about the security of their homes and their possessions, and so increasingly they are opting for dogs that can be fiercely protective over those that are just cute or aesthetically pleasing.  I think the trend points to increasing feelings of unease in our society, but I’m more curious to know our readers’ thoughts on the implications of the enduring or changing popularity of different breeds for contemporary American culture.  Should we be encouraged by the latest list, or is it a sign of more trouble ahead?

In his post yesterday about the Los Angeles shooter, Jeff pointed out the noteworthy lamestream media silence on certain key elements of the shooter’s manifesto.  Indeed, as Noah Rothman notes today at Mediaite: When crazed shooters can’t be linked to the Tea Party, the media displays admirable restraint.  The story of the shooter in Los Angeles, in fact, is–like several other recent shooters–only of interest to the press corps to the extent that it helps feed the narrative about “gun violence” and the need for more gun-control.  Elements of the story that don’t fit with the narrative are omitted, and especially those elements that contradict the narrative or help to fuel competing narratives.  Because the Los Angeles shooter’s manifesto complains about perceived “racism,” this could theoretically turn into a story about how the racial grievance industry has created a monster, but of course it never will because that is not an agenda the media has any interest in promoting.

Most of the times these days it seems that the press corps is pushing several different agenda items at one time, and news stories are only of interest or worth covering to the extent that they help advance one of those agenda items.  Rather than report the facts and let things fall where they may, the press tries to shoehorn as many stories as possible into the service of one agenda item or another.   The other day, for instance, I woke up to this story on NPR explaining that:  “The gun violence that scars some Chicago neighborhoods has been a plague for one woman. Shirley Chambers first lost a child to gunfire in the mid 1990s. In 2000, a daughter and a son were shot to death just months apart. On Monday, Chambers buried her last child.”  The story could have focused on the horrible failure of gun-control in Chicago, it could have talked about the problems with gangs in the city or crime related to drugs, it could have talked about the plight of inner-city blacks caught up in a dysfunctional culture, but it didn’t do anything like that.  No, the story had to be forced to fit the current narrative about the evils of “gun violence.”

But it’s not just “gun violence.”  As I write, a huge winter storm is bearing down on the Northeast.  When I spent a few years in New England in the 1980s, this sort of thing was to be expected and was known simply as “winter.”  These days, every storm of any magnitude is a big story, people are encouraged to panic and to scurry about, and inevitably, the articles begin to appear linking the storm to “climate change.”

Other common themes of note these days include the repeated focus on “bullying” as a way of pushing “anti-bullying programs” and “anti-bullying” legislation.  Hence, this horrible story is of interest to the media because it is seen as a way of advancing the “anti-bullying” agenda.  In years past, it may have been reported simply as a brutal fight in a school yard, but not any more.   I’m curious to know more about the attacker, but the story doesn’t tell us, nor does the journalist who wrote the story have any interest in reporting what the actual issues in this case are, because doing so would only undermine the “anti-bullying” agenda.  Even NFL cheerleaders are of interest largely to the extent that they can help advance the cause.

And of course, gay issues are another big agenda item for the press corps, but only insofar as gays and lesbians can be portrayed as either victims (of hate or discrimination or abuse) or as inspiring and selfless humanitarians.  Hence, this story about a supposedly “gay” dog in Tennessee was picked up by the national press because it helped advance the narrative that people in “red states” are stupid bigots who hate gays;  in truth, it is really a story about how there are people in all states who shouldn’t own dogs either because they are irresponsible and self-centered or because they have no knowledge or understanding of normal canine behavior.  Had the dog been euthanized after having been abandoned by a gangster or a meth addict in the inner city, you can be certain it wouldn’t have made the news.

Via Drew @ Ace, via The Other McCain‘s headlines.

UPDATE: The “dog meme, quips Michael Walsh “has legs. Derision is wolf bane to the Left.” Via Instapundit.

RELATED: Axelrod: Why are we wasting time talking about which dogs Obama ate as a kid? Hey, maybe, David, if you just said we made a mistake in attacking Mitt Romney for something he did in the early 1980s, we might agree to drop the subject. K?

As chief Obama strategist David Axelrod tries to brush aside speculation that he would make an issue of the GSA, Solyndra, and Secret Service scandals had they taken place when a Republican was in the White House, Ed Morrissey asks, “Isn’t this the same guy who attacked Romney for the way he traveled with his dog in 1983?”

Recall that Axelrod tweeted “a photo of Obama with his Portuguese water dog Bo in the back seat of the presidential limousine“, writing, “How loving owners transport their dogs”.  Had the Obama campaign not made an issue of this, had the president’s supporters not made jokes about this 30-year-old story on Facebook or mocked the Republican on bumper stickers, we wouldn’t be having so much fun with the president’s eating habits.

. . .  but as many others have said, it is silliness with a purpose. The Obama campaign seriously intended to make an issue of the fact that decades ago, Mitt Romney put the family dog on the roof of his car, in some sort of kennel or container, because there was no room inside. The dog was fine, but the Democrats crowed that focus group testing showed that the incident would make voters dislike Romney. I think that claim was sheer fantasy, but in any event, the Democrats won’t be able to talk about Seamus now that everyone knows that Obama used to eat dogs.

“Would this Obama dog story still be ricocheting around” asks Brit Hume, “if the left had let go of Romney 28-year-old dog-on-car episode? Paybacks a bitch?”  (Via Instapundit.)  Well, actually, karma’s a female dog.  And she’s come around to bite him.  And given his appetite, he so wants to bite back.

And Mr. President, just as long as your supporters mock Mitt Romney for once transporting his dog on the roof of his car, so long shall we mock you for writing about your Indonesian eating habits.

FROM THE COMMENTS:  V the K quips that, “Only an idiot would vote against Romney based on that dog crate story. The fact that Democrats are flogging it shows how little they respect the intellect of their voters.”

UPDATE:  “Funny“, quips Jim Treacher, “how an issue the Democrats brought up over and over for years suddenly stops being important when it starts making them look bad.”  (Via Instapundit.)

From the PatriotPooches to you…. (though it is hard to compete with The Gipper!) 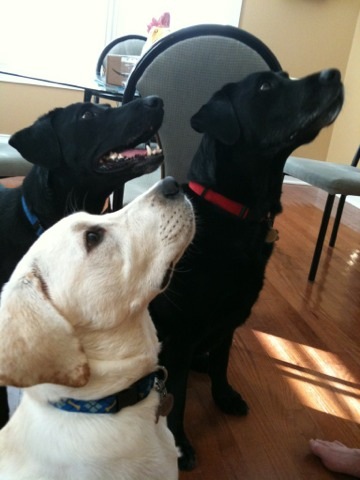