She’s the Minneapolis police chief who “married” one of her female sergeants. (Try doing that in Teheran or Riyadh.) Now, she’s one of several city officials in Minneapolis who wore Islamic Hijabs to show their Solidarity with the people who perform clitorectomies and stone gay people to death.

According to a Facebook post, Somali staffers that work at Minneapolis City Hall declared February 28 “Hijab Day” at City Hall and convinced the police chief and female city council reps to wear hijabs on the job.

The ACLU, American Atheists, and Americans United for the Separation of Church and State have been silent on the issue of public officials endorsing one religion over others (as best a brief Google search could determine.) The self-loathing nuts at Tikkun are completely on-board. 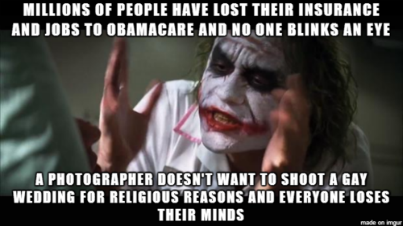 The Facebook COO and the cabal behind the campaign to make the term “bossy” politically incorrect and socially unacceptable are party of the ‘Ready for Hillary’ coven.

Sandberg is an ally of former Secretary of State Hillary Clinton, the frontrunner for the Democratic presidential nomination in 2016. […]

But why focus the campaign on the word “bossy”?

The answer to that may have something to do with Clinton being called “bossy” during the 2008 campaign by Australian feminist Germaine Greer. Bossy is also more tame than some of the other words Clinton has been called.

Two years ago, Democrats launched a campaign to brand Republicans as engaging in a ”war on women,” a campaign with a lasting impact that will no doubt stretch into the 2016 elections if Clinton runs.

Now the Ban Bossy campaign gives Democrats another weapon to use against those who disagree with Clinton’s policy ideas.

This way, anyone who criticizes Mrs. Clinton for her notoriously imperious, overbearing, domineering, difficult personality can be automatically attacked as “Anti-Woman;” much as all criticism of President Obama is attributed to “racism.” [But rest assured, calling Sarah Palin any crude, insulting name you want will still mark you as one of the Tolerant Enlightened.]

BTW, my good friend Stoaty Weasel has created a very… compelling… poster for Mrs. Clinton’s 2016 campaign. It’s a bit… uncivil… to reproduce it here; but here’s a link if you are feeling uncivil toward Mrs. Clinton.

Thanks to reader Peter H, for about half the items!

Gay dude I know from Teh Facebooks was all panty-wadded because Michele Bachmann said, “In Pursuit Of Denying Religious Liberty, The Gay Community Has ‘Bullied The American People.'” He called her “a stupid woman” for using the term “bullying” to describe the act of using the threat of force to coerce Christians who object to gay marriage to participate in gay weddings.

Dictionary.com provides the following definitions for bully in its noun and verb form.

Blustery quarrelsome and overbearing certainly apply to gay activists; take a look at any any protest where gay activists are involved. Habitually badgering or intimidating smaller or weaker people? That cuts to heart of exactly what the activists are doing, badgering and intimidating Christian bakers, florists, and photographers into servitude; the threat of jail and lawsuits for refusing to comply is very intimidating, and Christians are at a distinct legal and cultural disadvantage because of the dominant position of secularists and anti-Christians in the media and political culture. And inasmuch as there are always alternative providers for the services the militant ays are demanding, forcing unwilling people to participate is domineering behavior.

If you want to say the word “bully” is ridiculously overused, you will get no argument from me. But the dictionary seems to be on Mrs. Bachmann’s side, at least. The lines between bullying and activism were erased a long time ago.

Trail Life USA disagreed with the policies of the Boy Scouts (specifically, when they changed their policies to accommodate gays and atheists); and instead of whining about it to the media or suing to make the Government impose their will on people they disagreed with, they started a group more to their own liking. Agree with them or not, this type of solution is much less obnoxious and socially divisive than using Big Government to force their will on others.

But the progressive left can’t stand the thought of people living outside the collective and despise the fact that people are allowed to make choices they don’t agree with. And so, it is the people who want to be left alone by the Government whom they call Nazis, and not the people seeking to use Government to force their will on others.

Submitted for your consideration.

DEAR ABBY: My nephew is getting married next year. I was very excited because I love him and I’m a baker. I had planned on making the groom’s cake as I did for his brother’s and sister’s weddings. The problem is, they have decided on a hunting theme for their wedding — including a camouflage wedding dress for the bride.

Abby, I am an animal-rights activist. I’m against any form of hunting. I am also involved with several animal-protection groups. My nephew and his fiancee know how hard I work for animal rights — just the thought of a hunting theme for a wedding makes me ill.

I don’t even want to attend, let alone make a cake. What can I do so there will be no hurt feelings if I don’t want to attend or participate? — BAKER IN THE MIDWEST

DEAR BAKER: Feeling as strongly as you do about not attending, write the happy couple a warm letter wishing them a lifetime of happiness together and include a nice wedding gift — I’m sure there will be no hurt feelings.

Something tells me the objects of this person’s unhinged ire will just shrug it off and get a cake from somewhere else.

Because it is a violation of human rights for any business to refuse service to any customer (so I am made to understand it) a gay bar in Los Angeles are… um… refusing services to customers on the basis of (respectively) their beliefs and sexual orientation.

…David Cooley, the founder of The Abbey Food & Bar located at 692 North Robertson Blvd., has announced the popular gay bar will add any legislator in any state who votes for “bills to allow for discrimination against LGBT people” to a “Deny Entry List.”…

Also, he refuses to host bachelorette parties for straight women. Oddly enough, I don’t hear any Christians complaining about it.

MSDNC refused to air an ad from a gay rights group that criticized the network for interviewing the head of an “anti-gay” organization.

CNN refused to air an ad from a gay Republican organization.

CNN and NBC both refused to air an ad from a religious group that sought to welcome gays into their congregations.

CBS refused to air an ad for a gay dating service during the Superbowl.

Yet, all of these progressive-left run news organizations are foursquare behind the proposition that Christians (But not Muslims, conspicuously) should be forced under penalty of law to bake cakes and arrange flowers for gay weddings; under the principle that no business owner ever has the right to refuse to serve anyone.

This. So much this.

One thing that really gets to me about all the “gay rights” stuff is the insanity of insisting that anyone who doesn’t change their beliefs as facilely as the most hardcore advocates do is evil. Holding the view that Obama had when he was elected in 2008 is now hateful and bigoted.

MLK argued successfully that racial discrimination and segregation were not consistent with the moral foundation of the United States, nor with the Christian faith. He understood that not all people who opposed him were evil, and continued making his case to them. He said that one must love others if one is to change their minds. The gay rights advocates, apparently know better; one must constantly accuse, belittle, lie to, and sue those with whom one disagrees. One should not acknowledge any evil done in the name of one’s cause, and should proudly trumpet any lies that might be useful to the cause. One need not acknowledge this his opponents are human beings, and should freely call them bigoted monsters while giving no new evidence or argument as to why he should change his view. Leaving others alone with whom one disagrees is not enough to not be evil, one must enthusiastically endorse the correct views. [Emphasis added]

One thing the progressive left cannot wrap its head around is the notion that, in a truly free society, you have to be willing to tolerate the fact that other people will see things differently than you do, and will act in ways that you may not like.  And if you take away people’s rights to do otherwise harmless things that you simply don’t want them to do, you do not have a free society.

And if you don’t step in-line, the pinkshirts have a plan for you.