Apparently, he was sort of a big deal. Not sure I would have put it this way, though…

I think we will have to watch ‘Galaxy Quest’ tonight.

Since I am weird, I will post this as tribute:

Hollywood actress Melissa Gilbert is parachuting into Michigan’s 8th Congressional District to try and Ashley Judd/Clay Aiken that district for the Democrats.

You may remember her performance as Evil Shadow Whore Anna Sheridan on Babylon 5; although I feel like she may have been in something else. Some kind of pioneer cosplay thingy.

Evil Shadow Whore is as good a synonym for Democrat as I can come up with.

I was preparing dinner last night, and I dropped the pepper shaker on the floor, and heard myself exclaim “Shazbot!” I immediately thought, “Where did that come from?” My mouth is prone to unusual things coming out of it, but that Obscure Reference was a new one. I knew the source, of course. I had just never used that particular colorful metaphor before.

It was only after dinner, that I learned that Robin Williams had killed himself.

Strange coincidence, but I get those all the time. Little reminders that the Universe is neither random nor godless.

I don’t get affected by celebrity deaths, but it’s obvious from Facebook, the blogosphere, and such limited media as I have been exposed to that his passing affected a lot of people. Depression is a hard thing, and it must especially hard on a comedian. I lost a friend, in an indirect, non-suicidal way, to depression three years ago; he died while undergoing treatment in a hospital for his depression. (As another coincidence, his surname was also Williams.)

And I couldn’t help but wonder if all of those Family Guy jokes ripping on Robin Williams had contributed to his state of mind. How could it have felt for a comedian at the Winter Solstice of his career to not only witness a rising, seminal comic (Seth MacFarlane) occupy his former level of celebrity, but also to be a recurring target of that comic’s jokes. That must have been brutal.

Lots of people sad today. Are you?

Sometimes people get to a certain age and completely lose their filter. [Video at the link]

Asked by a street reporter whether a gay president or a female president will take office first, Rivers replied, “We already have it with Obama.”

“You know Michelle is a tr*nny,” she went on. “A transgender. Weall know.”

Based on excerpts from his interview in Playdude.

OLDMAN: Well, if I called Nancy Pelosi a [ladypart] —and I’ll go one better, a [frakking] useless [ladypart] —I can’t really say that. But Bill Maher and Jon Stewart can, and nobody’s going to stop them from working because of it. Bill Maher could call someone a fag and get away with it. He said to Seth MacFarlane this year, “I thought you were going to do the Oscars again. Instead they got a lesbian.” He can say something like that. Is that more or less offensive than Alec Baldwin saying to someone in the street, “You fag”? I don’t get it.

PLAYBOY: You see it as a double standard.

OLDMAN: It’s our culture now, absolutely. At the Oscars, if you didn’t vote for 12 Years a Slave you were a racist. You have to be very careful about what you say. I do have particular views and opinions that most of this town doesn’t share, but it’s not like I’m a fascist or a racist. There’s nothing like that in my history.

Ann B. Davis passed away this weekend at the ripe old age of 88; a relic of a bygone era where you could be gay in Hollywood and not have to shove it in everybody’s face every couple of minutes.

She is best remembered for her role as Alice on The Brady Bunch, where she starred with closeted gay actor Robert Reed. She was the butch one.

Apologies: When I wrote this, I was under the impression that Ms. Davis had come out as a lesbian in the early 2000s. But apparently, that was an unconfirmed but persistent Hollywood rumor. In fact, she went to her grave without ever making a spectacle of her sexuality; which is commendable.

The plot of the new movie Non-Stop is apparently totally credible and believable… if you’ve spent the last 13 years watching nothing but MSNBC and Bill Maher.

It gets worse…This 9/11 family member-turned-terrorist then joined the military but found himself disillusioned by the pointless wars. And now…The 9/11 family member-turned-terrorist is upset because America hasn’t done enough to ensure there will never be another 9/11. And so he figures if he can get an air marshal blamed for a terrorist attack, America will wake up and anally probe us before we’re allowed on a plane, or something.

It gets even worse…The villain’s sidekick is a member of the American military willing to murder 150 innocent people for a payday.

If that isn’t inconceivable enough…The one passenger on the plane who is forever helpful, kind, reasonable, noble, and never under suspicion is allegedly a MUSLIM DOCTOR in traditional Muslim garb and full beard.

And these are the people who think we should follow their cultural and political lead. They also think Obama is a god.

I have been a fan of Jodie Foster even before confirming, even before hearing, that she liked the ladies.  She is an incredibly versatile actress who has crafted a number of powerful performances, with my favorite one that earned her only a handful of nominations, and two only wins, but no Oscar, not even a nomination, the 1997 film Contact. And I liked her in Panic Room. And she stood out in The Silence of the Lambs, but she did win an Oscar for that–not to mention numerous other honors.

Last night, as nearly everyone knows by now, she, without using the “L” word, acknowledged (as far as I know) for the first time in a public forum that she once had a romantic relationship with another woman and asked, as per the Yahoo! headline below, that people respect her privacy: 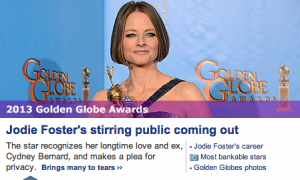 . . . I already did my coming out about a thousand years ago back in the Stone Age, in those very quaint days when a fragile young girl would open up to trusted friends and family and co-workers and then gradually, proudly to everyone who knew her, to everyone she actually met. But now I’m told, apparently that every celebrity is expected to honor the details of their private life with a press conference, a fragrance and a prime-time reality show. END_OF_DOCUMENT_TOKEN_TO_BE_REPLACED

My friends who watched Clint Eastwood’s speech last night revealed in its irreverence and thought it was great.  Some of my favorite pundits, however, wondered about the exercise, particularly scheduling it at a”vital” hour of the convention.

Sara Murray of the Wall Street Journal reports that Eastwood’s (use of the) chair surprised the Romney camp:  “Mitt Romney’s campaign staff did not realize that Clint Eastwoodwould be using that chair — at least not for something other than sitting.”  But, I wonder.

Perhaps, we would we wise to take heed of how the Romney campaign reacted:

Judging an American icon like Clint Eastwood through a typical political lens doesn’t work. His ad-libbing was a break from all the political speeches, and the crowd enjoyed it.

The crowd (and those “normal voters”) may have loved it — as did a number of my conservative friends who do not follow politics all that closely, but the Obama people really hated it.  Last night Democratic National Committee Chairman Debbie Wasserman Schultz singled out the “sketch” for scorn in lieu of commenting on Romney’s strong speech.

And it really seems to have gotten under Obama’s skin.  “This“, quipped law professor William A. Jacobson “Is Not The Tweet Of A Confident Man of a message the president sent showing himself in a cabinet meeting (via Instapundit).

And maybe that was the point, to, as Jacobson put it, get “under Obama’s skin.” Obama does not do well on defense, particularly when he feels others are attempting to mock — or tarnish — his image.  Maybe Republicans were trying to provoke a reaction that would make the Democrat look petty. END_OF_DOCUMENT_TOKEN_TO_BE_REPLACED