Read the whole thing!Â  Via Instapundit.

I just finished Roger Simon’s book, Blacklisting Myself: Memoir of a Hollywood Apostate in the Age of Terror, and quite enjoyed it, particularly the last three-quarters (short review to follow). Toward the end, Roger said something which reminded me of a joke I heard Friday at the LA Tea Party for Freedom.

Roger described himself as “the same old Groucho Marxist who would never join a club that had him as a member.” Al Sonja Schmidt (seen below), author of Deb & Seby’s Real Deal on Global Warming, offered this on Friday, “The leading comedians in America were once the Marx Brothers; the leading American is now a Marxist brother.” 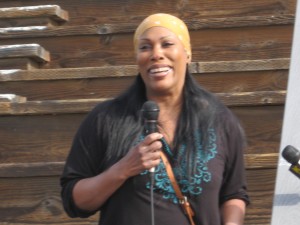 The last time I remember reading something on the left-wing blog firedoglake, I found it so offensive I didn’t think I’d ever return to the website.Â  Well, just a few moments ago, while scanning Instapundit, I followed Glenn’s link JANE HAMSHER: I want to play poker with Harry Reid to a post there which pretty much reflected my views on how the corrupt Democratic Governor of Illinois rolled his party’s leader in the US Senate.

Of course, Jane Hamsher has a style entirely different from my own.Â  And, I gotta admit, despite her politics, she’s a lot of fun to read, well, at least, in this post.

With his party enjoying the largest Senate majority in over thirty years, you’d think Reid would be having a field day as Democratic leader.Â  But, Hamsher shows how the ham-handed Harry has had his hat handed to him by the appointee of a hapless governor disowned by his own party:Â  “A seventy-one year old dude who hasn’t held office for 14 years, appointed by a crook, takes the Senate Majority Leader to the cleaners.”

Read the whole thing.Â  It’s witty and on the money.

Sure seems so.Â  I was actually going to give the angry lesbian a chance and watch her new show “Rosie Live.”Â  As I woke up this morning, it seems I missed my chance.Â Â  PatriotPartner and I just conferred:Â  we don’t think it was even aired on our local NBC affiliate station, despite the promo ads.

Seems like it was just as well.Â  It appears to be one of those hours of life that would have been lost forever. The network’s attempt to revive the primetime variety show failed to draw an audience Wednesday night, tying for the evening’s lowest-rated program.

“There’s a notion that the climate is right for the genre to make a comeback,” emailed one executive at a rival network. “I guess we now know what not to do, thanks to Rosie.”

Critics were not kind. The NY Times described it as “hokey comedy with an enemies list.” TV Guide called it a “ghastly ego trip.” And the LA Times asked, “Rosie, what on earth were you thinking?”

I guess I will just have to look forward to something else on my boob tube besides an angry boob who hates squirrels.

Now for something completely different: a moment of levity in this grueling campaign season… 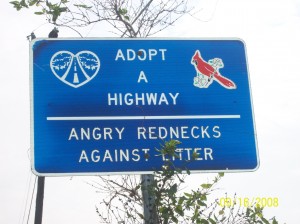 Drivers beware: the Commonwealth is now enlisting “angry Rednecks” into its anti-litter brigades (or are they battalions, Senator Biden?) so throwing trash on the road may become an even greater risk to one’s health! Remember, these “bitter” folks “cling to guns or religion” so won’t have any problem taking care of scofflaws. In the name of Jesus of course.

Spotted this sign today on a country road whilst driving around. Pretty damn funny!

I’ve mostly been taking a break from politics lately, but this one is just too good to pass up:

“We should be led by Osama bin Laden,â€ he said, then quickly corrected himself. â€œI mean Obama and Biden.” – former Congressman Charlie Wilson (D-TX)

Poll: Mitt Romney Is Candidate Most Voters Want To Get Into Bar Fight With

Hmm… I’m thinking that offering voters the opportunity to mess up Edwards’ perfectly-coiffed hair might help to raise his standing the polls.