Jeb Bush was interviewed yesterday and actually might just have learned something from the experience of being beaten by a Tang-Haired Angry Clown.

NICOLLE WALLACE: Did we — I mean, it can’t all be on Trump. Our voters wanted something else. Did we stop talking to them? Did we stop understanding them?

The voters have internalized that politicians are lying to them. They’re willing to take a chance that an outsider — even a shifty con-man — might not be lying to them. At least, not about everything.

When posting about Jeb Bush, the first question is, ‘Does anyone even care?’ But, still…

IMHO Jeb had two fatal problems, and they were closely intertwined. The first and most obvious was, on key issues like Amnesty and Common Core, he was simply way to the left of the mainstream Republican voter. Jeb’s wealth and family connections insulate him from the consequences of mass immigration and bad public schools; he really doesn’t have skin-in-the-game on those issues and can’t relate to those who do.

The second is his inauthenticity. Jeb tried to run as a conservative and nobody bought it. Jeb has always been a Big Gov moderate like his dad and his brother. People who are insulated from the negative consequences of progressive, big government policies tend to favor them. Jeb Bush has always been a creature of the political establishment — that part of the GOP that has more in common with their Democrat counterparts than with the people who vote Republican. These are the guys who are always happy to compromise (i.e. capitulate) in the interest of “bipartisanship” and “showing the American people we can work together.” He even gave Hillary a medal, for Set’s sake.

If Jeb had run as the Big Government moderate he really is, in his heart of hearts, he would at least have consolidated the Establishment Moderate vote behind him. But by trying to pass as conservative, he only succeeds in alienating both wings. All of the really expensive video mailers in the world won’t help an inauthentic politician who is out of touch with his voters.

It takes the complicity of the entire national media to pull that off.

If there isn’t one already, there will soon be a Hitler video about the Jeb! campaign. There is definitely a bunker mentality as Mr. Inevitable Dynasty has become Mr. Stuck-in-Single-Digits-While-Donald-Trump-Drinks-His-Milkshake. Recently, the Jeb! camp met with its megadonors (i.e. “Jeb’s Base”) to convince them to keep writing checks because despite Jeb’s low and sinking poll numbers, eventual victory was inevitable. Out of that meeting leaked this slide: 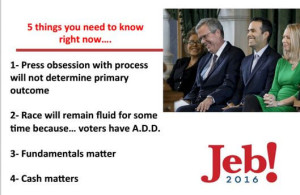 “Voters have ADD” and “Cash matters.”  In two bullets, we have a summary of how the Bushies feel about the voting public, and what is really important to them.

The Bush’s have always projected a sense that they did not see elected office as an opportunity to advance the priorities of the voters; but rather to use powers to drive the public down a path of their choosing, because they knew best by virtue of breeding and education. They are indistinguishable from Democrats in that regard. It’s why I have never warmed to the Bush sense of entitlement about high elected office.

END_OF_DOCUMENT_TOKEN_TO_BE_REPLACED

The Republican Establishment has never run a more Establishmentier candidate; next he’ll be praising abortion, tax increases, and activist judges. From The Hill.

“I would say the best part of the Obama administration would be his continuance of the protections of the homeland using the big metadata programs,” Bush said in an interview on the Michael Medved radio show.

He lauded the Obama administration for refusing to buckle under pressure from Democrats, civil liberties groups and some Republicans.

So, you know how this movie ends, right?

The Awesome vote is split three ways, and we get stuck with Jeb.

END_OF_DOCUMENT_TOKEN_TO_BE_REPLACED

Cracked.com (which has started to list decidedly to port) has a pretty good article on how Hollywood misrepresents poor folks.  Basically, Hollywood has no concept of the money problems faced by real lower income people. In TV and movies, they live the same consequence free lifestyles as the moneyed Hollywood elite; never fretting about a car repair, a reckless expenditure, or a sudden need to travel.

Our political elite is equally as ignorant of how people in the lower three-fifths of the income quintiles live.

Take Jeb Bush for example. (But this is just as true of Hillary, Biden, Obama, or most any other name-brand politician.) Do you think he has ever had to sweat losing his job because his car broke down and he didn’t have the money to fix it? Do you ever think he was kept at night worrying how he was going to make the mortgage payment *and* pay for his kid’s orthodonture? Do you think any of them has ever seen the discount rack at Kohl’s? (Scott Walker has.)  Do you think he’s ever saved money at Food Lion (or as we call it, Nom Kitteh) by buying meat with the orange sticker on it? Or even been inside a Nom Kitteh for that matter?

All the Bushes are Patricians, Gentry with the same view of the American middle class and working class as their openly Progressive Democrat counterparts. They see us as peasants and customers for Government.  “Kinder Gentler Gentler Nation” (Bush 41) “Compassionate Conservatism” (Bush 43) “Right to Rise” (Bush Wannabe) are all the same damn thing; lipstick slogans on the pig of Progressive, Big Government, Rockefeller Republicanism.

It’s why they make no distinction between Americans and illegal immigrants; alike, we are all the peasant class to be ruled over. No one in the Bush family is ever going to lose out on a job because an immigrant will work cheaper; nor are they going to miss out on an educational opportunity because Affirmative Action will favor immigrants, illegal and otherwise. Policies that beggar the working classes only mean more dividends in their portfolios.

And, Ra forbid, Bush somehow manages to become President, he’s only going to surround himself with other clueless 1%er elitists. While I am sure the guy means well, like the rest of the political class, he is so detached and insulated from the consequences of his policy choices that he cannot help but be indifferent to damage he causes.

The Republican Establishment’s choice for 2016 is standing by his commitment to importing millions of cheap foreign laborers into a country with an anemic economy and record low levels of employment. (Even Gallup admits the Obama unemployment figure is a “big lie”.)

I have a couple of questions for Mr. Bush, that no one is going to ask him.

1. You say that illegally crossing the border is “an act of love.” What about American workers with families, whose jobs are being taken and their wages are being driven down by cheap immigrant labor. Don’t they love their families, too? Don’t they have a right to wages and jobs to support better lives for their families?

Jeb Bush and Mittens Romney are meeting in Utah this week. These are two incredibly wealthy men, born into wealthy, powerful political dynasties, who have never once had to worry about how to pay a bill in their life. Between the two of them, they represent support for allowing illegal immigrants to take jobs from working Americans, federal control of local school curricula through Common Core, and massive Government regulation to stop ‘Global Warming.’

So, naturally, the party establishment has decided they are ideal to represent the concerns and priorities of the Republican base. Despite what the deranged left claims, every Republican presidential candidate since 1988 has been a Milquetoast Progressive-Moderate chosen by the Party Establishment. And they have lost the popular vote in 5 of those 6 elections. But, hey, they’ve got all the money and power, so there’s not a damn thing we can do about it.

BTW, the GOP elected to majorities in the House and Senate in November have already caved to the Obamacrats on abortion and Amnesty. And it’s still January.

Conservative Radio host Mark Levin … who has an audience size that is the envy of every working network journalist … described Republican Jeb Bush (who may run for president in 2016) as a “good moderate Democrat.” This did not sit well with with the Mainstream Media, some members of which felt obliged to testify on behalf of Mr. Bush’s conservative bona fides.

Jeb Bush. Not conservative enough. Try as I might, it remains impossible to see these two concepts as even remotely related. John Ellis Bush, the second son of George Herbert Walker Bush and Barbara Bush, who during his first run for Florida governor in 1994 cheerfully called himself a head-banging conservative, a hang-’em-by-the-neck conservative … who during his second run for Florida governor in 1998 had to craft for himself a more compassionate persona so as not to scare off independent voters … that Jeb Bush has come to be viewed with suspicion by the uber-conservative, Tea Party wing of his Republican Party?

One can conclude from this that… um… the MFM really, really want Jeb Bush to be the Republican nominee against the Hillary in 2016. Because, obviously, they think he will present interesting and thoughtful ideas and provide Americans with a viable alternative to Mrs. Cinton and they will treat him with complete fairness and respect.

And if you believe that, let me tell you about my sister-in-law who made enough to buy a Ferrari working on the internet…

Anyway, I don’t deny that Jeb Bush is more conservative than Hillary or Obama. But he is a Bush, and after three Bush terms, we know how they govern, and we know that… philosophically, at their core, they believe that Government Knows Best and, in that very significant way they are of one mind with the Obamas, the Clintons, the Kennedies, and all the other statists.

Jeb Bush might just turn out to be the best Democrat candidate for 2016. Speaking to an audience in Florida, Bush expressed admiration for the architect of the Great Society and the Vietnam War.

He vowed to approach the presidency as “master of the Senate,” as biographer Robert Caro described Johnson.

“He went and he cajoled, he begged, he threatened, he loved, he hugged, he did what leaders do, which is they personally get engaged to make something happen,’’ Bush said of Johnson. Bush cited Caro’s latest book about Johnson, The Passage of Power, which covers the first part of Johnson’s presidency.

The wheeling and dealing Johnson loved and relished is what will be needed to pass bills such as immigration regulations. That process is also how government gets expanded and cronyism thrives, as Peter Schweizer’s nonpartisan Government Accountability Institute and directer Stephen K. Bannon documented in “Boomtown.”

Bush also admitted that he’s absolutely clueless as to why Americans don’t want to import millions of units of cheap foreign labor when there are tens of millions of Americans out of work and middle-class wages have been declining.

“For the life of me I have a hard time understanding why people are fearful of our own heritage, our own history,” Bush reportedly said. “The rules are you come to this country, you pursue your dreams, you create value for yourself and your families and others and great things happens to you and to our country. Why would we ignore that at time when we need to restart and rejuvenate our economy? It makes no sense to me.”