Of all the left-leaning pundits on CNN, Donna Brazile comes across as the most level-headed and the least smug, in part because the charismatic and sage Democratic strategist identifies herself as such and doesn’t pretend something she’s not (i.e., a nonpartisan observer).  A few others may claim to be dispassionate, but they wear their liberal ideology on their sleeve.

And Brazile, despite her partisan leanings, does give Republicans credit where it is due as she did earlier today on CNN”s web-page, departing from the media-crafted narrative of the immediate past president’s incompetence in responding to the Katrina catastrophe:

Despite the many differences I had with former President George W. Bush on a range of public policy issues, or as he called them, “decision points,” I found common ground with him in one area, simply because we decided to put aside partisanship and do something good.

Hurricane Katrina’s devastation and the bungled rescue efforts are seared in the national memory. Bush’s “heckuva job” remark turned into a byword for government incompetence and public distrust. The shallowness of it coming at such a terrible and low point left deep wounds that are still healing. That was what it was.

Tapped in 2005 by the then-governor of Louisiana, Kathleen Blanco, “to serve on the state’s commission overseeing the long-term recovery from the damage caused by Hurricane Katrina,” Brazile saw more than just that one inopportune comment:

Bush understood the need for civility. I joined him despite my frustration because the need was too great for finger-pointing and blame-making. END_OF_DOCUMENT_TOKEN_TO_BE_REPLACED

Caught this on Drudge last night:

We heard all sorts of horror stories, most of them untrue, about the goings-on at the Superdome, most supposedly Bush’s fault.  So, why is Drudge the only one linking the desperate situation in parts of Manhattan to the president?

When Sandy hit, New York had a Mayor who would endorse Obama, the state has a Democratic Governor.

Over at the American Thinker, J. James Estrada contends that the electrical outages might not have happened had congressional Democrats not blocked a Bush administration plan to upgrade the nation’s electrical grid.  (Via our reader Former Left-Leaning Lesbian.)

CREDIT WHERE IT’S DUE:  Anderson Cooper is reporting the crisis on Staten Island.  (Via Instapundit.)

BARACK OBAMA’S KATRINA, WITH BLOOMBERG IN THE ROLE OF RAY NAGIN? This Depressing NBC Segment On Staten Island Could Change The Way The World Sees Hurricane Sandy. “This NBC segment on the situation this week on Staten Island is awful, and makes the response look horrible.”

It is perhaps instructive that Hurricane Irene threatened to devastate the East Coast almost exactly six years after Katrina did indeed devastate the Gulf Coast in and around New Orleans.

Now, to be sure, then-President George W. Bush did make his share of blunders in responding to the storm, perhaps his greatest being that he respected our federal system and trusted local authorities, who traditionally direct the response to handle natural disasters.  The federal government merely plays a supporting role.

“One hundred years ago,” John Hinderaker wrote yesterday about the incumbent’s pretense of taking charge of hurricane relief efforts

Six years ago, our friends in the mainstream media used this expectation of of presidential responsibility over disaster relief to prove that the then-incumbent was the incompetent they knew him to be.  His image never recovered from their assault (though it just might have had he then had a press secretary who was not in a perpetual “defensive crouch“).

As the facts trickled out, it became increasingly clear that local authorities botched relief efforts in Louisiana.  Recall, that the storm devastated coastal regions in Mississippi and Alabama, but the chaos centered around Louisiana.   The then-Governor of Louisiana, Kathleen Blanco, a Democrat, dilly-dallied before declining the “dual-hat” command structure to accommodate her concerns about “federalizing the response“.   President Bush was concerned about overstepping his bounds and not interfering with state responsibilities.

And because of those concerns for our federal structure, he was blamed for the Democratic governor’s failures. END_OF_DOCUMENT_TOKEN_TO_BE_REPLACED

. . .  correcting all errors made by the (evil and) incompetent George W. Bush (and his bungling team).

Nagin and Brown Agree: US Not Prepared for Another Katrina

Perhaps, it was the serendipity of catching this headline, 3 officers plead not guilty in Katrina shootings, while pondering the media’s comparatively* kid-glove treatment of the Administration’s reaction to the Gulf Oil Spill that reminded me just how jaundiced was their coverage of Katrina.

Here we have a story of the misconduct of New Orleans police officers, individuals answerable to municipal, not federal, authorities, yet all too many media outlets covered the story as if the Bush White House and the Republican’s appointees were entirely responsible for the mayhem in The Big Easy in the immediate aftermath of Katrina:

Five former officers already have pleaded guilty to helping cover up the shootings, which happened in the midst of another of the scorching days after Katrina. Bodies floated in filthy flood waters. Shots could be heard throughout the city, and many believed they were aimed at the endless stream of helicopters, the police, the rescue crews.

This all relates to the overheated media coverage of Katrina, with many false stories making their way to the public through the media, such as at the “legend” of shot being fired at helicopters.  This is not to excuse the Administration for some of the bungled federal efforts at relief, but to point out that officials from other levels of government responded in a manner which compromised relief efforts and conributed to the chaos.

This story serves to remind us that municipal officials did not always respond in a professional manner, yet somehow, somewhere a narrative was created of George W. Bush’s almost exclusive incompetence.

Before I left LA, I had wanted to post on the contrasting narratives of Katrina and the Gulf Oil spill, but due to the press of a number of obligations, did not get the chance to do so to the degree that I would have liked.  And doubt I will be able to address this is in a timely matter.

Fortunately, some other bloggers have been looking into the matter, one of whom is the ever-insightful Jim Geraghty who offers:

The dominant narrative of Katrina made no room for the normal human errors and snafus that mark any response to a giant problem; righties are naturally objecting to the sudden reinstatement of the “Hey, sometimes stuff happens, what can you do?” standard under a Democratic president.

It does seem that the MSM used Katrina to do what they had failed to do in 2004, bring down George W. Bush.  And with that good man, but flawed executive, then having an inept communications operation, they succeeded.  (If not in throwing him out of office, in at least, portraying him as inept.)

RELATED:  “OBAMA’S KATRINA: ‘The media started riding Bush about his response to Katrina within a couple of days. Obama got a pass for over a month.'”

A piece by Mark Tapscott in the Washington Examiner reminds me of something I read about the Katrina disaster:

Why didn’t federal officials implement an oil spill clean up plan they’ve had on the books since 1994 as soon as possible after crude began pumping into the Gulf of Mexico following the explosion and sinking of BP’s Deepwater Horizon drilling platform 53 miles south of Louisiana in the Gulf of Mexico?

The Mobile Register reports that Ron Gouget, who formerly managed the oil spill cleanup department of the National Oceanic and Atmospheric Administration, as well as a similar unit for the state of Louisiana, is criticizing the Obama White House’s failure to act according to existing government plans in the event of a spill in the area now being deluged with thousands of barrels of crude oil every day. Now, a number of conservative pundits and libertarian bloggers and even headline writers at the New York Times are comparing the Gulf Oil Spill to Katrina.  And there are numerous similarities.  A crisis coming from the Gulf, with Louisiana most severely hit.  And while the Administration has clearly blundered, acting too slowly, it was not entirely to blame for the mishap.

Even the New York Times and Bill Maher (Bill Maher!) have chastised the Administration, with the latter asking, “Why isn’t Barack Obama getting more s–t’ for the oil spill in the Gulf?”

In asking the question, he’s pretty much giving us the answer.  The president is not getting more grief for the spill for the same reason reporters didn’t catch l’Affaire Poney Soyeux (John Edwards’ mistress story):  He’s a Democrat.

We would see more hyperventilating news anchors and more screaming headlines a Republican president acted exactly as Obama had.  And they’d ramp up the stuff about W carrying water for the oil companies.

Over the past decade, while the state of Florida has often been hit hard with hurricanes, few complaints were heard about the quality and speed of government relief efforts.  Many have credited the immediate past governor of the Sunshine State, Jeb Bush, for his hurricane response program.

Part of that good man’s administrative expertise was putting the right men and women into the right jobs, a quality which oftentimes distinguished him from his elder brother.  In 2001, the younger Bush tapped Craig Fugate to head Florida’s Division of Emergency Management.  Bush’s successor Charlie Crist, to his credit, kept Fugate on.

Now, President Obama is bringing that Bush appointee to Washington, nominating him to head the Federal Emergency Management Agency (FEMA).  Smart move.  Given that state officials are the first responders to any catastrophe, it helps to have a man who has been on the front lines of relief efforts.

He’ll be well suited to coordinate a national effort and help whip the various state agencies into shape so they’re better prepared to face the next disaster than was Louisiana in 2005.

Kudos, Mr. President.  Fugate’s a good pick.  We can been pretty confident he’ll serve the nation as well as he served the Sunshine State.

When two readers, within fifteen minutes, alert you to the same post, I always make sure to check it out.Â  And they were right.Â  This one is worthy of a link.

Michelle Malkin received a letter from a reader in Paducah, Kentucky who wrote to tell her just how bad things were in the Bluegrass State, “The situation is much more depressing for those who live in the rural area of our region as utility poles were snapped in half by the weight of the ice all over far Western Kentucky.”Â  According to the Paducah Sun:

The word from utility workers with direct Katrina experience is that ice storm devastation to western Kentucky’s power grid is worse than that inflicted by the infamous Gulf Coast hurricane.

â€œWe’ve got linemen here from southern Mississippi who were there when Katrina hit, who worked the area after the hurricane,â€ said Kevin Inglish, a spokesman for West Kentucky Rural Electric Cooperative Corp.â€

What stands out Michelle’s correspondent is that “no news anchors from any of the Big 3 or any cable news channel including Fox News” have flown in to cover the devastation as they ran to cover Katrina.

The president has yet to visit the region.

If you want to help out, FEMA lists volunteer agencies providing relief efforts.

Michelle details some of the relief efforts here. 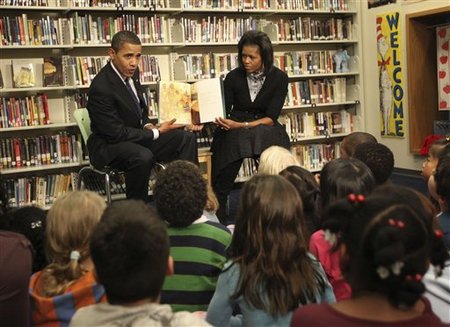 Who would have thought that President Obama would make President Jimmy Carter look competent and in-touch?