Monday night when returning from our Meatless Mondays Steak Dinner, I asked a reader who had traveled with me to there event if he noticed that there were more chain stores opening up across LA.  On the way back from Burbank (to West Hollywood), within fewer than five minutes, we passed a new Walgreen’s and two Rite-Aids, one of them new.

There do seem to be more such drug stores opening up across LA, not to mention fast food restaurants, with a Chipotle replacing a flower shop on Melrose and La Brea and what appears to be an Old Navy moving into space on Beverly vacated by an independent furniture store.

Given that big companies have large staffs to help them maneuver through regulatory hoops — and making the cost of compliance (through economies of scale) cheaper per storefront than for an independent operation, it seems that big government makes it easier for the big guys and more challenging for individual entrepreneurs.

Ironic that more often than not, those who lament the increasing presence of chain stores tend to vote for the politicians whose policies serve to give a competitive advantage to those chain stores.

FROM THE COMMENTS:  David Boaz suspects

. . . there might be two things going on. Chain stores probably have efficiencies of scale, bigger marketing budgets spread over more stores, more research on what consumers like, etc. But yes, it is also often argued that compliance is easier for larger companies. They have lawyers, HR departments, and so on. Charles Murray — maybe in his book “In Pursuit” — has argued that increasing complexity requiring verbal and paperwork skills benefits educated people — the sort of people who write regulations and get hired by big companies. Small business folks may be less likely to be college-educated and proficient at navigating bureaucracies.

David’s book Libertarianism: A Primer is quite a good read — and highly recommended.

Just a reminder about our next Meatless Monday steak dinner tomorrow Monday, January 28.

Drop me a note to RSVP and for details.  Our next dinner on Monday, February 25 will feature a special guest from the Carolinas.

Just a reminder about our next Meatless Monday steak dinner this coming Monday, January 28.

Drop me a note to RSVP and for details.

I began my holiday shopping yesterday in Westwood Village, the shopping/dining district immediately adjacent to UCLA; was struck by the amount of vacant retail space.  On Westwood Blvd itself, I counted five empty storefronts on each side of the street just on one block (between Kinross and Weyburn).  And that’s not counting the signs on the second floor.

And I could see signs advertising “Space available” on other buildings beyond this block.

When I mentioned this in one store where I bought some gifts, a clerk commented that someone had just said the same thing about Beverly Hills.  He noted that Westwood Blvd had been particularly hard hit, with a Mexican restaurant that had served the area for twenty-five years, recently vacating its Westwood premises.

I believe this the space that restaurant once occupied: 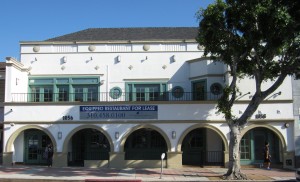 Note these two storefronts, immediately adjacent to one another: END_OF_DOCUMENT_TOKEN_TO_BE_REPLACED

It’s not too late to RSVP for our Meatless Mondays Steak Dinner today, Monday, December 10 here in LA.

Have not been in much of a blogging mood today, perhaps because have been focusing on other writing projects, so will use this space to remind y’all about our Meatless Mondays Steak Dinner next Monday, December 10 here in LA.

In honor of the Los Angeles City Council’s recent approval of a resolution “endorsing the ‘meatless Monday’ campaign and asking residents to make a personal pledge to ditch meat for one day a week”, our next steak dinner will take place on Monday, December 10.

Drop me a note to RSVP — and include the word “Steak” in the subject.

We had such a good time at our steak dinner Monday night that we all talked about making this a regular event, celebrating the LA City Council’s declaration of meatless Mondays by eating steak.

We’re going to try to do another one on Monday, December 3 or possibly the 10th. Drop me a note if you’d like to join us and let me know which day works best for you.  Also please let me know where you live.  We’d like to find a more central location; one participant had come up from Anaheim and hoped not to have to trek so far for the next gathering.

Just a reminder to RSVP to me before 7:00 PM for our GayPatriot Steak Dinner tonight (November 19) in Hollywood (within the City of Los Angeles) in honor of the Los Angeles City Council’s recent approval of a resolution “endorsing the ‘meatless Monday’ campaign and asking residents to make a personal pledge to ditch meat for one day a week.”

On Friday, the Los Angeles City Council unanimously approved a resolution “endorsing the ‘meatless Monday’ campaign and asking residents to make a personal pledge to ditch meat for one day a week.”

In honor of that resolution, I believe we should gather for a steak dinner at a Los Angeles restaurant next Monday.  Please let me know if you’re interested so I can begin planning.