Why is it when Democrat-Leftists want to insult Republicans/Conservatives, they do so by calling them gay? 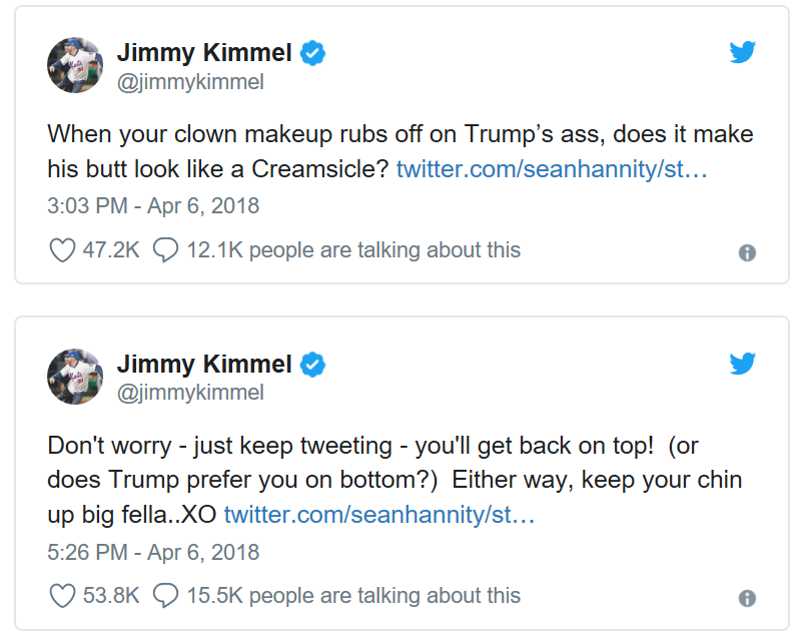 “When Someone Shows You Who They Are, Believe Them” – the Only Poet Leftists Know

A train hit a dump truck yesterday killing a 28 year old sanitation worker. Because the train was carrying Republican congressmen to a retreat, the Progressive Democrat Left found this hilarious.

That would also include anti-Trumper Bill Kristol, who tweeted that it was OK to “indulge in all manner of GOP trainwreck jokes” before deleting it.

Deranged leftist ghoul Stephen King tweeted, “A trainload of Republicans on their way to a pricey retreat hit a garbage truck. My friend Russ calls that karma.”

Twitter is what you might call a trou-de-merde, but at least it exposes people for who they are.

An art gallery in Airstrip One removed a Victorian Era painting that depicted women in a state of undress; it offended the #MeToo movement.

It isn’t the first time this has happened and, oh, guess who else is involved in the sudden left-wing purge against “offensive” art?

Facebook has been criticised for removing imagery of a nude statue of the god Neptune which has stood in a public square in Bologna, Italy, for centuries. It said the work was “sexually explicit.”

Likewise, imagery of the Little Mermaid statue in Copenhagen, Denmark, was taken down for showing “too much bare skin.”

While in 2016, officials in Florence, Italy, covered up Michelangelo’s “David” during a visit by the president of Iran, reportedly to respect the country’s cultural norms.

By the way, it’s only the depiction of the beauty of the human form that the cultural jihadists on the left find offensive; crucifixes dunked in urine and the Virgin Mary smeared in menses are still just dandy.

Heck, I’m old enough to remember when the left got their panties in a wad because George W. Bush’s Attorney General covered the hoo-hahs on a naked lady statue.

Based on the documentation provided as part of James Damore’s discrimination suit, Google operates as a cult of left-wing progressives who promote an environment of hostility against conservatives, Republicans, Trump supporters, and white men. The Federalist has a summary, but here’s a few to give the flavor of the thing.

“Google furnishes a large number of internal mailing lists catering to employees with alternative lifestyles, including furries, polygamy, transgenderism, and plurality, for the purpose of discussing sexual topics. The only lifestyle that seems to not be openly discussed on Google’s internal forums is traditional heterosexual monogamy.”

A footnote next to the word “plurality” adds: “For instance, an employee who sexually identifies as ‘a yellow-scaled wingless dragonkin’ and ‘an expansive ornate building’ presented a talk entitled ‘Living as a Plural Being’ at an internal company event.”

[Google Manager Kim] Burchett once proposed creating a list she would personally manage of “people who make diversity difficult,” to include employees who did things like make statements “unsupportive of diversity.” She suggested the list could serve as a punishment that could incentivize “better” behavior among the offenders listed.

“You can’t support Donald Trump without also supporting his racism, misogyny, homophobia, and transphobia,” a Googler wrote in a lengthy communication on Trump supporters. “Or even worse, if you vote for Donald Trump because of his economic policy or because you feel the other party is corrupt, then what you’re saying is that economics is more important than the safety of your peers. This is where my tolerance ends: with intolerance.”

I don’t think this situation is unique to Google – it’s likely quite common at Silicon Valley tech firms. Google management actively encourages its left-wing progressive employees to gang up on those who don’t share their cult-like fixation on “diversity,” socialism and encouragement of sexual deviance. BadThink at Google will get an employee cut off from opportunities for advancement, but blacklisted in the insutry, and even threatened in their private lives. (Sounds more than a little bit like Scientology.)

Gay dude raised as a Democrat dogma drone starts thinking for himself, personally experiences the failures of Democrat policies, realigns as Republican. When he comes out as Republican, his Democrat family and friends reject him. (HT: Runningrn)

When, in my adulthood, the liberal policy agenda became problematic for me, I found myself at a loss. I began to raise questions with my family and friends, and met resistance. It was not because my concerns were particularly inappropriate; I was just not supposed to be questioning at all.

One could disagree with nuances, but not the judgment of the (then) president, or the party. Period. The irony of this apparent intolerance for diversity of thought by the party claiming to champion the rights of groups underserved by the status quo was not lost on me.

For the first time in my progressive life, standing up for the values that I most strongly espouse—truth, morality, self-reliance, boundaries, tolerance, and a healthy dose of Jewish skepticism—was damaging my reputation and character. When I publicly opposed my dad’s support of the Iran deal, I was admonished. I had few friends with whom I could have a civil political conversation: one stopped all communication with me for two weeks because Trump won the presidency.

If Republicans are bad, Trump is nothing less than Satan embodied. Post-election family gatherings devolved into group Trump-bashing, which intensified as more rumors of my dubious views wafted across town. I did not even bother going to gay pride because it was fused with a Resist march. If you do not want to impeach our president, you have no place in gay life.

I was labeled a white supremacist by a friend I’ve known my entire life, and completely dropped with no explanation by another dear friend and self-anointed giant of the gay civil rights movement to whom my father had introduced me 15 years ago.

If the left were secure that their policies worked and their ideas were the right ones, would they have so much hostility toward people who question them?

University Thought Police Interrogate a Dissenter Who Offended a Transgendered.

At about 18:00, the interrogator … in his annoying, condescending, effete academic accent… informs her that free speech is a Nazi belief, and exposing transgendereds and other “marginalized communities” to ideas they don’t like will cause them to commit suicide.

At 25:00 in, the interrogator says that college students are children who need to protected from scary ideas.

At 33:00 he explains how the purpose of the university is to indoctrinate students in approved, politically correct ideas.

Flashback: When Facebook ex-employees admitted that Facebook routinely censors conservative news from their “Trending” section. Even if it was really trending.

Addendum about the march’s organizers: END_OF_DOCUMENT_TOKEN_TO_BE_REPLACED

As V pointed out earlier, Now, Everybody Who Isn’t a Radical Is a Nazi. The same goes for First Amendment supporters.

Here is the First Amendment:

Congress shall make no law respecting an establishment of religion, or prohibiting the free exercise thereof; or abridging the freedom of speech, or of the press; or the right of the people peaceably to assemble, and to petition the Government for a redress of grievances.

And what does “peaceably” mean? It does NOT mean smiles, rainbows, unicorns, or coming all unarmed. Nope. It means:

Under those terms: Nazis, KKK, or even Commies (Antifa) are allowed to assemble and do a little march. This is why, in 1978, the ACLU successfully defended the right of neo-Nazis to march in Skokie, IL.

Here’s the point: EVERY American, no matter their color or background or life experience, must accept this. Because, that’s America. It’s how America rolls.

Horrific as that final crime was, are those counter-demonstrators who attacked people somehow “understandable” or “justified” or “morally better”? Not under the terms of the First Amendment.

So, should President Trump call out the demonstrators alone and give them all the blame? Not under the terms of the First Amendment.

Either you support the First Amendment, or you don’t. If you do, then you have to put your focus on neutrally defending everyone’s First Amendment rights, as President Trump does.

This goes for the colossal dummies Rubio, Romney, McCain, and all you Democrats and SJWs out there. If you believe in the First Amendment, you’ll unite behind the President’s approach. If you don’t, we know the truth about you.

It’s time to remember your Constitution and rally behind First Amendment rights (and other rights, like due process) for all citizens, especially the ones you can’t stand.

UPDATE – Icing it: Atlanta leftie mob tears down a Peace Monument. Because, yes, mobs are that stupid.

A left-wing professor at Columbia thinks they should try.

Mark Lilla, writing in today’s Wall Street Journal, criticizes his own side (the left) for derailing itself with identity politics. He says that liberalism’s post-1960s embrace of identity politics resonates with young people in “our highly individualistic bourgeois society—a society that keeps them focused on themselves and teaches them that personal choice, individual rights and self-definition are all that is sacred.”

Lilla, who is a professor of the humanities at Columbia, and who identifies himself as a “frustrated liberal,” says he is struck by the difference between his liberal students and his conservative students. The conservative ones formulate opinions and make arguments based on ideas and principles. The liberal ones, though, base their arguments (such as they are) on an assertion of identity (e.g., “Speaking as a lesbian of color, I believe that…”). Lilla goes on:

“Conservatives complain loudest about today’s campus follies, but it is really liberals who should be angry. The big story is not that leftist professors successfully turn millions of young people into dangerous political radicals every year. It is that they have gotten students so obsessed with their personal identities that, by the time they graduate, they have much less interest in, and even less engagement with, the wider political world outside their heads.

“The politics of identity has done nothing but strengthen the grip of the American right on our institutions. It is the gift that keeps on taking. Now is the time for liberals to do an immediate about-face and return to articulating their core principles of solidarity and equal protection for all. Never has the country needed it more.”

Yeah, good luck with that. The Democrat Media-Academic Complex has spent decades indoctrinating people to believe that identity and feelings were the only things that mattered. Rage has been the fuel of the left for decades, and they don’t really have any alternative fuels available. You’re not going to get very far in changing left-wing rage culture when universities are offering courses on “The Intersectionalities of Fat Shaming” and media outfits are publishing stories about how blonde women are inherently racist.