I flirted with the idea of voting for Gary Johnson for a while. He lost me when he said that unless the Government forces Christians to bake cakes for gay weddings, then the streets will run red with the blood of religious violence. He also lost me on his “no limits” mass immigration policy; he’s actually a ranting lunatic on the topic of illegal immigration. Also, because he picked a running mate who thinks using a secret Government list with no Constitutional protections to bar people from exercising their human right of self-defense is a good idea.

The Libertarian candidate’s economic ideas are so radical they make Trump seem downright moderate. He would abolish federal income taxes, replace the current tax code with a more regressive national consumption tax, cut Medicare and Medicaid by 40 percent, push for a constitutional amendment to forbid the U.S. to run deficits even during downturns, ban federal bailouts of states, and seek to eliminate the Federal Reserve.

Yes. Yes. Yes. Yes. Yes. And Yes. More economic freedom! Less intrusive Government! An end to crony capitalism! A thousand times yes. But not at the expense of religious freedom and the import of hundreds of millions of third-world migrants who will drive down American wages and vote for socialists. When they’re not driving around listening to raps and shooting all the jobs.

The notion that Government should be reduced to a manageable size, that the economy should be allowed to grow with minimal interference, and that people should be… well, free… is the stuff that absolutely turns the stomachs of left-wingers. They want to run our lives, and want us to pay them for the privilege.

BTW, Spain hasn’t had a working central government for several months now. None of the dire consequences predicted by the socialists at ‘The Atlantic’ have come to pass.

A transgendered Republican person wants everybody to know shklee is all down with the Republican Party because it stands for “freedom and opportunity.” On the other hand, shklee thinks certain freedoms and opportunities should be limited by the Government. And… just by coincidence… the freedoms shklee wants to curtail are related to shkler’s status as a transgendered. Shklee doesn’t think other people should be permitted to disapprove of shkler or hurt shkler’s feelers in any way.

The issue of LGBT rights is one area in which she finds herself very much at odds with her party. She is “disappointed” in some of the rhetoric used by its leadership. For her, there is an inconsistency between the party’s position on the individual rights of Americans to own guns, and the individual rights of LGBT Americans to live their lives as they choose – something some Republicans do not accept. “If you want to support personal liberty, you really should be consistent and do it in all areas,” she says.

And then, shklee goes on to support the Federal Government forcing states and businesses to let people with penises use the lady’s room if they claim to be ladies, and hates on Mike Pence for daring to defend the personal liberty of Christians who don’t want to be forced to bake cakes for gay weddings. So, what shklee actually supports is “Personal liberty unless it offends somebody or hurts anybody’s feelers.” Especially, if it hurts shkler’s feelers. If your exercise of your personal liberty makes Shker feel uncomfortable, the state ought to step in and make you support shkler.

And this whole “the individual rights of LGBT Americans to live their lives as they choose – something some Republicans do not accept” is also horse crap. The number of Republicans who give a rat’s anything about how LGBT Americans live their private lives is minuscule and probably less than or equal to the number of Democrats who disapprove of Teh LGBT’s (There’s a lot of Blacks and Mohammedans in that coalition who don’t think too highly of Teh Gheys). The thing that bothers a lot of people — not just Republicans — is being forced to celebrate and applaud other people’s lifestyles, as though we were standing at the side of a Birthday Parade for Kim Jong-Un and will be sent to the camps for not applauding enthusiastically enough.  Also, there is this thing about reordering all of society and discarding all common sense and reason to cater to the delicate feelings of a teeny-weeny number of people. But what you do in your private life (long as you don’t cause real hurt to somebody) is nobody’s business, and that’s where the vast majority of us have always been.

So if you identify as Republican because you support Republican tax policy and neo-conservative foreign policy, okayfine. But don’t pretend you support individual liberty when you want the state to curtail the personal liberties of people you disagree with.

I recently purchased a bumpersticker similar to this to go along with my “Gary Johnson 2016 #FeelTheJohnson” bumpersticker. But now that I’ve thought about it, I am having second thoughts.

Let the special snowflakes have their “Safe Spaces” where they can suck their thumbs, grasp their teddy bears, and tell each other how awesome the world would be if they were the only ones allowed to be mean to other people; but let conservatives be free to express their opinions without fat triggered feminists screaming obscenities at them.

“Don’t Tread on Anyone” — Terrific slogan.

END_OF_DOCUMENT_TOKEN_TO_BE_REPLACED

Started writing a post about Obama bullshirt propaganda townhall for gun control, but then I saw this instead. Enjoy.

Office Depot has refused to print a flyer critical of Planned Parenthood. (It’s Daily Caller link, so it’s like putting your screen in front of firehose of ads.)

“When I tell people they’re shocked because this is America,” Goldstein told The Daily Caller News Foundation. “Office Depot is trying to silence my freedom of speech and my freedom of religion.”

I thoroughly disagree with Home Depot’s decision to do this.

However, as Office Depot a private business, I believe they are completely within their rights to refuse to do so. Just as a Christian bakery should have the right to refuse to bake a cake for a gay wedding. No one should have to forfeit their Constitutional Rights in order to open a business. (If you work for the Government like Kim Davis, however, that’s a different set of circumstances.)

Office Depot isn’t harming anyone by refusing to print this. Staples is a thing that exists. There are other private print shops who would be happy for the business.

And no one ever died because someone else wouldn’t bake them a wedding cake.

If you truly believe in liberty, you have to accept that sometimes people are going to make choices you disagree with. And unless their choices physically or economically harm someone else, they should be left alone to make them.

The alternative is tyranny. 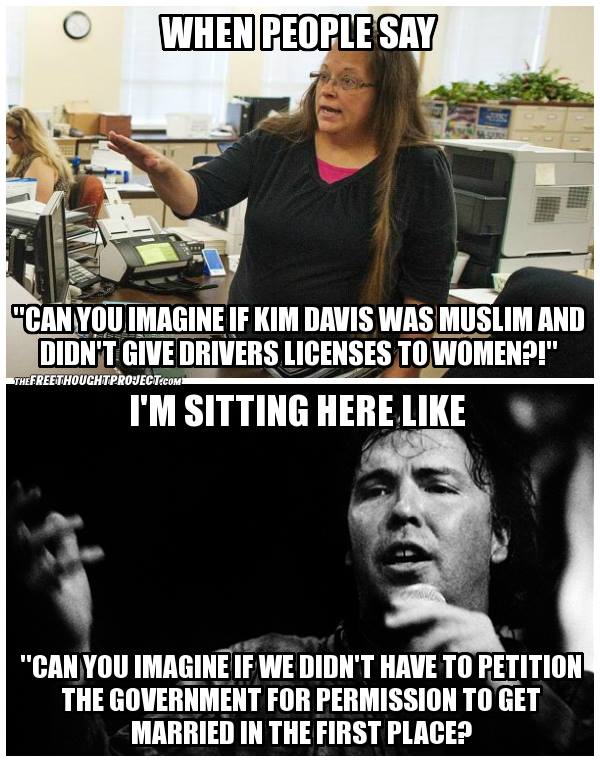 There is a strain of fascism that runs through the Modern Democrat Left. A decade or so a go, such a statement would have been outrageous, over-the-top, hyperbolic.

Nowadays, not so much, it seems. Check out what happens when a reporter asks Hillary Clinton supporters if they support a hypothetical plan to repeal the Bill of Rights.

The Washington Post, of all places, takes a deeper look at the social topography in greater St Louis and discovers that what hurts the urban poor isn’t so much racism as  Government greed and corruption.

Local Governments in and around St. Louis have made a lucrative racket of shaking down the poor by having cops write tickets and courts impose fines for victimless crimes. The collusion of cops, courts, and local politicians is a highly lucrative racket. No wonder the urban poor feel persecuted and preyed upon.

Some of the towns in St. Louis County can derive 40 percent or more of their annual revenue from the petty fines and fees collected by their municipal courts. A majority of these fines are for traffic offenses, but they can also include fines for fare-hopping on MetroLink (St. Louis’s light rail system), loud music and other noise ordinance violations, zoning violations for uncut grass or unkempt property, violations of occupancy permit restrictions, trespassing, wearing “saggy pants,” business license violations and vague infractions such as “disturbing the peace” or “affray” that give police officers a great deal of discretion to look for other violations. In a white paper released last month (PDF), the ArchCity Defenders found a large group of people outside the courthouse in Bel-Ridge who had been fined for not subscribing to the town’s only approved garbage collection service. They hadn’t been fined for having trash on their property, only for not paying for the only legal method the town had designated for disposing of trash.

The people hit hardest by these fines are the working poor, for whom a fine of $100 or more is a severe hardship. And it isn’t a case of white-run Governments and white-run police forces shaking down poor black people. Black-run municipalities are as bad and worse.

END_OF_DOCUMENT_TOKEN_TO_BE_REPLACED

The sexy up-and-coming political movement, “the wave of the future”, is (almost by definition) the one where the young, hot women are. I don’t know where they are now, except Obama ain’t it. As just one illustration, here’s Carey Wedler, a former Obama groupie burning her 2008 campaign T-shirt.

Her list of specific disappointments with Obama is pretty left-wing, but she has some pro-liberty ones in there too, and she comes to a libertarian-anarchist conclusion: “The institution of government is the problem.”