This is awesome.Â  While the Left is fawning over the change of policy regarding the UN Declaration (good move, Obama — truly), some promininent gay Republicans are noting the vicious irony.

From a press release yesterday: [GP Ed. Note: This press release did NOT come from Log Cabin Republicans– the “official” gay Republican organization.Â  Rather it is a statement from two former LCR staffers.]

â€œIt smacks of tokenism to sign a U.N. resolution on the treatment of gays and lesbians, while opening the door to closer relations with the brutally anti-gay regime in Iran,â€ said Jimmy LaSalvia, a Republican activist and former Policy Director for Log Cabin Republicans.Â  â€œWhile the Obama administration should be applauded for signing this resolution, the resolution is meaningless if they pursue a foreign policy that appeases tyrants like Ahmadinejad.â€

According to the International Gay and Lesbian Human Rights Commission, the crime of homosexuality is punishable by death in Iran.Â  â€œIf the Obama administration is serious about stopping the persecution of gays and lesbians across the globe, then they will make it clear that they will not deal with states like Iran where the penalty for being gay is death,â€ said Christopher Barron, the President of CapSouth Consulting and the former Political Director for Log Cabin Republicans.Â  â€œIf the U.S. is going to be a leader in defending human rights, it’s going to take much more than a toothless U.N. resolution.â€

Now here are my two cents:

Obama also wants to engage with the Taliban, Hamas, Hezbollah…. shall I go on?

It is important that the US join the world bodies in such action.Â  But it is MORE IMPORTANT that gays are not left hanging (pun intended) as Obama begins his campaign of appeasing the Islamists around the world.

Sometime early this morning we hit 2.5 Million Unique Visitors here at GayPatriot since debuting on September 4, 2004.Â  Just waaaay back in September 2008, we hit the Two Million Mark.Â Â  So that is quite an uptick in traffic in less than six months.

My sincere thanks to Dan (GayPatriotWest) for his steady hand on the ship’s wheel — especially during the Presidential Campaign last fall.Â  Thanks also to John (AverageGayJoe) and Nick (ColoradoPatriot) for their continued contributions and insights.

And on behalf of all of the bloggers at GayPatriot, a very big thanks to all of our readers and supporters.Â  We have become an important voice in the center-right blogosphere.Â  We are bringing issues and perspectives about gay America to people who never would have listened before becauseÂ that information was coming from the radical Gay Left who do not respect opposing views.

So thanks again to everyone.Â  We look forward to many more new visitors and being a vocal part of the Loyal Gay Opposition during the next four years.

HOUSEKEEPING UPDATE:Â  In the true spirit of being a Libra, I’m a the true procrastinator.Â  So I FINALLY shipped out the hardcopy originals of “Liberal Fascism” to our TWO MILLION contest winners this week.Â Â  Our winners (back in Sept., 08) were Jeremiah D. and Rob S. — two long-time GayPatriot readers. 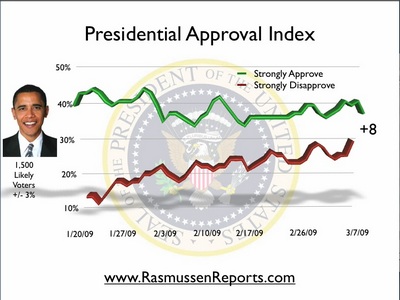 Looks like the lines will cross in…. oh about a month, if not sooner.

Dear Leader — what are you doing wrong?Â  We,Â The PeopleÂ all know…. it is time for you to figure it out.

Here’s some free advice.Â  Stop partying on the taxpayer dimeÂ while the rest of America is dealing with your declining economy.

From Bill Moyers to Mike Rogers –Â liberals now have a documented history of shamelessly and ruthlesslyÂ rooting out The Gays(tm) who are in public service in Washington, DC.

So, since we have such an alleged “progressive” Administration now…. there is simply no reason for any gay or lesbian to be in the closet if they work in the Obama Executive branch.

Therefore, I am officially kicking off an effort to promote the openly gay and lesbian staff and officials who work in the Obama Administration.Â  Come out, come out, all of you!Â Â  I’m now accepting names and titles and will proudly publish them as I get them.Â Â  You can’t be afraid of anything — you work for the OBAMA Administration, right???

I fully expect liberals and progressives to avalanche me with emails with these out and proud public servants.Â Â Again, there is simply no reason for all gay and lesbians in the Obama Administration to publicly declare their sexual orientation.

So let’s see how this turns out, folks.Â Â  My email address is BRUCE@GAYPATRIOT.ORG.

Be part of the Loyal Gay Opposition!Â  Order your bumper sticker today!

Liberals always wanted us to question authority, right?Â  Well, now THEY are the “authority”.

As Barack Obama takes the oath of office as the President of the United States, he becomes my president.Â  I did not vote him and would rather another man were taking office today, but a majority of my fellow citizens and the electors from the various states voted otherwise.

Unlike some who helped elect the president, I don’t feel proud of my country merely when my candidate wins election to the highest office in the land.Â  By the same token, I don’t love my country any less because the man I opposed won that very office.Â  Indeed, I love it more that a man whose race would have earned him opprobrium in many parts of this country the year he was born could become our chief executive.

I have the same feeling that I think many Americans have, that it’s really remarkable that — what we’re going to . . .Â  swear in the first African American president of the United States. When I came to town in 1968, we’d had the Martin Luther King assassination, Bobby Kennedy assassination, riots in the cities, major, major disturbances, a lot of it racially motivated around the country.

And in fact, things have changed so dramatically that we’re now about to swear in Barack Obama as president of the United States. That’s really a remarkable story and I think a record of tremendous success and progress for the United States.

Obama’s election is a sign of the greatness of this country, that we can correct our faults as a nation, helping forge a more perfect union.

While we herald his achievement and honor the office he now holds, we will criticize, when appropriate, his policies.Â  We will not be like those who spent the last eight years (or significant portions thereof) in a constant state of animosity to the President of the United States.Â  Claiming he is not our president, as many did in the preceding eight years, would mean denying our American citizenship.

Barack Obama is now our president.Â  That doesn’t mean he should be immune from our criticism.Â  No President should

Ever since this blog was launched, we found ourselves more often than not defending the president, particularly when he was unfairly attacked.Â  Now, we have a new role, that of the loyal gay opposition.