Former President Barack Obama considered being homosexual as a young man, according to a forthcoming biography of the president.

Obama wrote somewhat elusively to his first intimate girlfriend that he had thought about and considered gayness, but ultimately had decided that a same-sex relationship would be less challenging and demanding than developing one with the opposite sex.

OK, one comment. How could Obama “consider being gay.” We know that’s impossible right? You’re hard-wired gay or straight from whatever point in the womb you cease being a blob of parasitic cells and become a potential human life. Nobody chooses to be gay. It’s not possible. The science is settled.

END_OF_DOCUMENT_TOKEN_TO_BE_REPLACED

Along with the 10 terrorists Obama is releasing from Guantanamo Bay this week, Obama is also commuting the sentence of the Transexual Traitor Chelsea Manning.

As many people have observed: Leaks that hurt US national security are meh at worse, but leaks that hurt Democratic political ambitions? Unforgivable.

Yeah, that. But also this is a huge middle finger to the military (and every soldier who served honorably), and a big wet sloppy pajama-hug to the radical LGBT left. So, for Obama, a two-fer.

The Democrat-Media Complex will be giving Manning interviews, followed by the inevitable book deal and perhaps a tenure-track position teaching “Gender Issues in National Security” at a university.

Oh, and Obama also released a terrorist who set off bombs in the United States for the purpose of advancing Communism.

And these aren’t the last. What’s over-under on Cop-Killer Mumia Abu Jamal getting a commutation?

Update: And, once again, the left is upset about pronoun usage and offending a transgendered criminal’s feelings.

Update to the Update: A “guy from Obama’s neighborhood” could not be happier about the release of his fellow domestic terrorists.

Does Obama’s endless pandering and ego-stroking make up for his disastrous economy, his endless abuses of executive power that crack the very foundations of our democratic republic, his eight trillion dollars in accumulate debt, the havoc he is wrought on our health care system, the corruption and incompetence of his VA which has led to scores of veteran deaths, losing Iraq and unleashing ISIS, collapsing the southern border, the domestic spying, and all the other scandals in this horror show of a presidency?

In the past few days, in order to pander to gays, Obama has…

Does all this empty pandering really work for you guys? Does it make up for all the disastrous domestic and foreign policies? Does it really?

END_OF_DOCUMENT_TOKEN_TO_BE_REPLACED

The Middle East is on fire. The United States’ image abroad has so deteriorated that once-close allies are calling their alliance with the USA worthless. And central America is pointing a flood of underage refugees to the United States to swell our already overwhelming welfare roles.

But, don’t worry, John F. Kerry and Barack Obama have their eye on the ball.

“I am very proud of the progress that we are now making even in appointing LGBT ambassadors. I worked with the committee here at the State Department – with the D Committee, and I worked with the White House. And as a result, Ted Osius, sitting here, whom I’ve known a long time, and his family I know, will be the first openly LGBT officer nominated to serve as an ambassador in Asia. And on confirmation, he’s going to join five openly gay ambassadors who are now serving their country. I’m working hard to ensure that by the end of my tenure, we will have lesbian, bisexual, and transgender ambassadors in our ranks as well.”

The country is in the very best of hands.

[Sort of Hat Tip to Peter H. Sort of]

The Administration that has done such a fantastic job with providing health care to America’s Veterans wishes to make sure gays and lesbians have that same quality of health care.

Obama’s Fascist Army* (OFA) is selling T-shirts so that LGBTQRWXZY people can demonstrate that love is all that matters… love for Obama, that is. 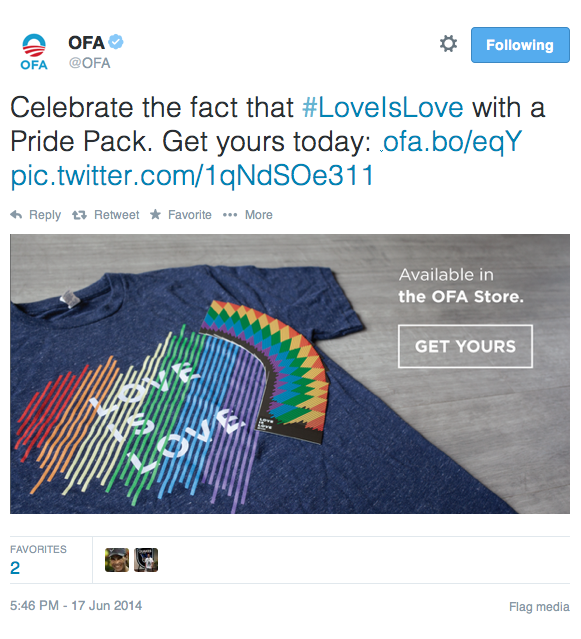 END_OF_DOCUMENT_TOKEN_TO_BE_REPLACED

So, President Obama has destroyed the economy. He has run up more debt than all previous presidents combined. The southern border has completely collapsed and is being flooded with illegal immigrants. A band of Islamists so extreme even Al Qaeda rejected them is running amok in Iraq and Syria. He just turned five of the worst terrorists in the world loose from GITMO. His IRS is harassing conservative opponents and then lying about it. New EPA regulations will destroy a quarter million jobs per year and send energy prices skyrocketing.

And some people think none of this matters because he  is working on an essentially meaningless Executive Order telling Federal contractors not to discriminate against gay people, which none of them do anyway.

An empty gesture from an empty suit.

But it will excite the low-information voters and they will forgive all of his corruption and incompetence., because nothing matters but gay people’s feelings.

“It is now vitally important for all of us to insist that this executive order, when eventually signed by the president, does not include religious exemptions that would permit taxpayer dollars to be spent on discrimination,” said a statement from Heather Cronk, the co-director of the GetEQUAL advocacy group.

No gay victory is complete until Christians (but not Muslims) are forced to bow before Big Angry Homo.

This isn’t a recent thing, but it is quite sordid, isn’t it? His name was Raymond Boyer, known as “Gay Ray” to Mr. Obama back when he supplied Mr. Obama’s “Choom Gang” with marijuana. His list of clients included many at the exclusive private school where Mr. Obama “spent the last two years of high school in a daze.”

President Obama’s high school pot dealer who (sic) he thanked in his yearbook for the ‘good times’ was beaten to death by his lover after a series of fights over flatulence and drugs.

Mr. Boyer’s post high school experience has a certain resonance with the experience of Millennials unfortunate enough to have come of age under Mr. Obama’s economic policies.

Since getting high with Obama and his private school educated friends he lost his job as the manager of a local pizzeria and ended up on welfare living above a car repair shop.

One expects this sort of thing from Mr. and Mrs. Clinton, but it is a bit of a surprise coming from Mr. Obama’s direction.

‘Barry also had a knack for interceptions. When a joint was making the rounds, he often elbowed his way in, out of turn, shouted “Intercepted!”, and took an extra hit.

Now, that sounds more like the Mr. Obama we have come to know.

MSDNC – the network that makes Leni Reifenstahl say “You guys are a little over the top” – declares Barack Obama the first gay president.

Eat it, James Buchanan! (Or was it Abe Lincoln that liberals claim was the first gay president despite… you know… having four kids?)

Meth is a hell of a drug.

I guess he’s the MSDNC religion expert because their religion is Obama-worship.

MOAR MSDNC Stuff: Angry Porcine life form Ed Schultz who describes himself as a proud tax-and-spend liberal — dodges taxes and doesn’t provide health insurance to his employees.  Rather typical of the left, isn’t it?

END_OF_DOCUMENT_TOKEN_TO_BE_REPLACED

Generation Opportunity, “a free-thinking, liberty-loving, national organization of young people”, has set up OptOut.org to let young people know that they needn’t (and probably shouldn’t) sign up for Obamacare. Their current ad for young women:

Now for the ‘media bias’ angle. I learned about this from Yahoo! which, naturally, has titled their article “Creepy Obamacare ad hits college campuses”.

In other words: Even after all the government-spying scandals, Big Government-run health care (that costs a young woman far more than she’ll get from it, despite the fine they’ll extort for her saying ‘no’) still doesn’t strike Yahoo! News as creepy. But ads against it, they’ll suggestively title as ‘creepy’.

FROM THE COMMENTS (thank you Kurt): Get ready for Obama(care) to ask detailed questions about your sex life. Umm…I thought that was only supposed to happen under the Religious Reich Theocracy that the Left always warns us against?

The president’s “reforms” aim to turn doctors into government agents, pressuring them financially to ask questions they consider inappropriate and unnecessary…

…the new requirements are turning it “into an interrogation, and the data will not be confidential.” Lack of confidentiality is what concerned the New York Civil Liberties Union in a 2012 report…

Privacy and confidentiality will just be for the rich:

The administration is ignoring [various] protests from privacy advocates. On Jan. 17, HHS announced patients who want to keep something out of their electronic record should pay cash.