If, back in 2008, our legacy media had taken the time to look into Sarah Palin’s actual record in Alaska politics, three names of corrupt politicians would forever be associated with her, Frank Murkowski, Greg Renkes and Randy Ruedrich.  And the reason we would associate their names with hers was not because she turned a blind eye to their double-dealing, but because she exposed it.

She stood up against corruption in her own party.  Each of those men is a Republican.  As she put it in her post yesterday on Andrew Breitbart’s Big Government:

Barack Obama and I both served in political office in states with a serious corruption problem. Though there is a big difference between serving as the CEO of a city, then a state, and regulating domestic energy resources, and being a liberal Community Organizer, bear with me on the comparison. The difference between my record and Barack Obama’s is that I fought the corrupt political machine my entire career (and I have twenty years of scars to prove it) on the local, state, and national level. But Obama didn’t fight the corruption he encountered. He went along with it to advance his career.

And yet our friends in the legacy media bought into the claim that that career Chicago poll was some new kind of politician.  They neither asked nor looked for any evidence to buttress his claims.

Sarah Palin, by contrast, had a real record of reform.  It’s just that some journalists thought her tanning bed of greater interest.

But, we’ve been through this before.  That said, it serves as an important reminder about necessary battlefield preparation for the coming presidential contest.

NB:  Tweaked the title to make it less clunky

“Apparently“, writes Rob at JoshuaPundit, “Rush Limbaugh meant what he said when he told his listeners, ‘Those advertisers who no longer want your business, fine, we’ll replace them.‘”

The conservative talker, who has apologized for slurring a woman who defended the administration’s contraception mandate, is taking in stride the handful of companies no longer advertising on his program:

Less than an hour after AOL officially became the eighth company to pull its ads from Limbaugh’s radio show, the conservative host cracked a joke [then] continued his broadcast in typical, pontificating fashion. . . .

While the conservative host said that the advertisers’ disaffiliation was a “shame,” at the end of the day he just doesn’t care.

You know the Limbaugh-haters should have left well enough alone when the talker apologized.  I think that’s called quitting when you’re ahead, right?  Well, as they continue to demonize the popular broadcaster, his standing among conservatives will only strengthen.

Rush is not the only conservative to see a coordinated attack backfire.  Seems that HBO, despite massive promotions, had trouble scrounging up an audience for “Game Change”.  Only a handful of its subscribers, writes John Nolte, “bothered to tune into one of the most hyped movies in the history of television. Glitzy, glamorous premieres, all kinds of free publicity through the cable news outlets, controversy galore, and yet ‘Pawn Stars’ kicked its ass.”  He quotes the Washington Post:

To put the audience in perspective, that’s slightly fewer people than sat down the next afternoon at 2 to watch a rerun episode of History’s “Pawn Stars” (2.129 million viewers). END_OF_DOCUMENT_TOKEN_TO_BE_REPLACED

Don Surber was on a roll this past weekend. Glenn linked his must-read post on the videos linking Barack Obama to radical law professor Derrick Bell:

This video will not bring down President Obama. His sorry record of no accomplishments will. We cannot afford to live in 2008 and mope about Obama not being vetted. The job before us is to show that the last 3+ years have sucked and 4 more years of Obama — a red-blooded, true Christian American who was born in Hawaii — will suck even harder.

While over at Surber’s site, I caught up on some of his recent posts, including this critique of Rick Santorum’s organization, a piece on the record level of polar ice, an alert to an Obama campaign attack on Sarah Palin, and the video included at the end of this post.

He contends the Palin ad shows that the president runs “on diversion” that the Democrat “is running for re-election as a troll.”  Do hope my fellow Republicans follow the lead of another conservative blogger, Jim Hoft and focus on another Democratic attempt at diversion, illegal robocalls targeting Republican Congressmen who just happen to be on the Democratic Congressional Campaign Committee’s (DCCC) hit list.

If the Democrats are so confident of victory this November, how come they keep trying to distract voters? END_OF_DOCUMENT_TOKEN_TO_BE_REPLACED

You have to wonder about people in politics who define themselves by their animosities.  Some people seem to spend the better parts of their day obsessing about Sarah Palin and other right-wingers who figure prominently in their demonology.  If you really hated this accomplished reformer, why would you want to subject yourself to seeing her picture every day on your wall calendar: 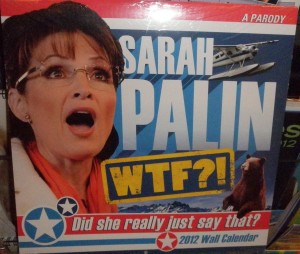 WTF stands for Winning the Future, right? We conservatives tend to put up Ronald Reagan Wall Calendars — not those mocking Jimmy Carter.

It’s not just the publishers of this wall calendar who obsess over the former Alaska Governor. As Byron York reported last month, “‘Game Change,’ the movie version of the 2008 campaign best-seller that premieres” next week on HBO, has a peculiarly Palin focus:

The book, by journalists Mark Halperin and John Heilemann, focused equally on the bitter contest between Barack Obama and Hillary Clinton for the Democratic presidential nomination, and the troubled McCain-Palin ticket that went down to defeat in November ’08.

But the movie is about just one topic: Sarah Palin. Director Jay Roach jettisoned most of the book’s riveting political story so he could focus on the tumultuous period in which John McCain chose the then-governor of Alaska as his running mate. END_OF_DOCUMENT_TOKEN_TO_BE_REPLACED

A few days ago, Bruce alerted me to Pat Dollard’s tweet reminding us that current MSNBC host Al Sharpton once referenced “Greek homos.”  After a quick google search, I learned that the left-leaning pundit also used a term that caused the folks at HRC to get their panties all in a bunch when the daughter of a prominent Republican celebrity used it.

Although I could find no reference online indicating that HRC rebuked the bombastic Reverend for his use of the term, they did honor him in 2005 as one of their “Top 10 Straight Advocates for Gay and Transgender Rights“.

Now, people can surely change.  And perhaps HRC did fault Mr. Sharpton when he made these statements and their rebukes are no longer online.  But, that man did, in recent years, defend a prejudiced pastor who used anti-gay rhetoric.

Wonder why HRC and GLAAD are not calling for him to publicly rebuke his past statements in order to retain his post on MSNBC.  I mean, if they called on Sarah Palin to apologize publicly for her teenage daughter’s remark.

Commenting on a Newsweek cover designed to make Michele Bachmann look demonic, Michelle Malkin posts (with numerous examples on  “The liberal media fetish of demonizing conservative women and their looks goes back years.”

It is a fascinating phenomenon.  Wouldn’t feminists want conservative women to succeed to show females earning the accolades of the Republican rank and file and demonstrating a capacity to lead?

Yesterday, Jim Geraghty reprinted account that Mike Allen had included in his newsletter from Politico about a meeting of hedge-fund billionaires in New York where “venture capitalist Ken Langone . . . implored New Jersey Gov. Chris Christie to reconsider and seek the GOP presidential nomination.”  Several in the audience indicated that they were Republican show voted for Obama because they “couldn’t live with Sarah Palin”:

Many said they were severely disappointed in the president. The biggest complaint was what several called “class warfare.” They said they didn’t understand what they had done to deserve that: If you want to have a conversation about taxation, have a conversation. But a president shouldn’t attack his constituents — he’s not the president of some people, he’s president of all the people. Someone mentioned Huey Long populism.

Well, does seem the media did their job, destroying the reputation of Mrs. Palin while ignoring the background of Mr. Obama, leading Geraghty to comment:

But not all of us are shocked and stunned about Obama’s class warfare and his demonization of you and the sense that he doesn’t think of himself as your president too. Some of us spent two years telling anyone who would listen that he was a lot more liberal than his bland, blank-slate rhetoric suggested. And was all of this worth it because you “couldn’t live” with Sarah Palin? Really?

Emphasis added.  We had news media rifling through Mrs. Palin’s garbage, yet uninterested in checking out Mr. Obama’s story, so much did they swoon over his narrative.  And now, bit by bit, we’re learning not just how far left he’s always been, but also how he’s misrepresented his own background.

Many in our mainstream media have taken Barack Obama’s word as gospel.  And when it comes to subjecting him to the same sort of scrutiny to which they subject Republicans, particularly Republican women, well, they’ve just taken a pass.

Guess MSNBC must just have stricter standards for political discourse than CBS.

It seems that Sarah Palin arrived just in time for the Bush-hating left.  In 2008, as the much (and mostly unfairly) maligned President of the United States was preparing to head off into a constitutionally-mandated retirement, his political party nominated the charismatic governor of Alaska as its vice presidential candidate.

And ever since, those who once projected their inner demons on George W. Bush found a new target for their wrath.  He might be going into retirement, but they would still have a Republican to revile.

So much has their demonology of Sarah Palin developed that her haters remain clueless how this accomplished reformer earned so much respect among Republican reformers — even before John McCain tapped the Alaskan as his running mate.  Indeed, mainstream media outlets were so convinced they’d find dirt in her recently released e-mails that they dispatched as many as thirty reporters to Juneau to sift through them.

They were simply not prepared to discover e-mails which showed a focused and energetic executive doing her job.  The emails, as the editors of the Richmond Times-Dispatch put it, “have redounded to the author’s benefit and have left her critics dismayed” (via Instapundit).

They were dismayed because the e-mails did not confirm their conviction of her incompetence.  Reality did not conform to their narrative.

Maybe if they had actually bothered studying her record as governor of the Last Frontier, they might realize that she reached across the partisan divide to accomplish real change for Alaska, where she was, to borrow an expression, a kind of a post-partisan politician.  They wouldn’t have been so dismayed had they taken the time to study her record and consider her accomplishments, instead of viciously responding to her nomination.

And she’s a former governor.  And not now a presidential candidate.  I wonder how many reporters are investigating how “a radical left-wing special interest group gets a big boost in federally funded grants and contracts after one of its most visible leaders is appointed to a key White House job.”  Or Operation Gunwalker.