We here at GayPatriot never tire of showing how many leading of the national gay organizations show greater loyalty to the Democratic Party and its candidates than they do to gay people and our issues.  This goes back at least to 1996, when the Human Rights Campaign (HRC) refused to rescind its endorsement for then-President Clinton when he, in the dead of night, signed the Defense of Marriage Act (DOMA).

Look at how Charles Kaiser (just after the 2:30 mark) tries to excuse Clinton for signing Don’t Ask/Don’t Tell (DADT), the ban on gays serving openly in the military.  He blames a Republican instead.  Nor does this activist and author have a problem with the Democratic candidates’ position on gay marriage (this was during the run-up to the 2008 Democratic primaries).  And see how Endora-winning blogress Tammy Bruce takes him to task:

This gay activist, like the heads of the gay organizations, give Democratic leaders a pass for taking the same stands for which they would excoriate Republicans.

It seems celebrity blogger Perez Hilton has learned a thing or two from them.  Everyone who owns a computer or television set knows by now how he insulted Carrie Prejean, Miss California, calling her response “awful,” “the worst in pageant history” when, during the final round of this year’s Miss USA pageant, she said she believed “marriage should be between a man and a woman.”  Incidentally, she holds the same position on marriage as does the President of the United States.

Shouldn’t he then call the Democrat’s stand an “awful” position?

Of course not.  That (D) after Obama’s name renders him immune from criticism for taking the same stands which might earn a tongue-slapping for a Republican (or Republican-appearing pageant contestant).

From Jehuda on the Rhetorican, we learn that “Perez Hilton is giving Obama a pass for his anti-gay marriage stance.” END_OF_DOCUMENT_TOKEN_TO_BE_REPLACED

I have long been a fan of Ellen. She is both funny and self-deprecating. Even after she came out, now over a decade ago, she hasn’t politicized her identity as have many openly gay performers in the public eye. She just seems very comfortable in her own skin.

Her sexuality is, as it should be, incidental to her public persona.

Anyway, while working out today at the gym, I caught her on a commercial for Cover Girl makeup. I guess that makes her a lipstick lesbian now? I also thought of Ellen as a no-makeup kind of gal.

Whatever the case, Ellen’s becoming “the new face of Cover Girl” is just one more sign of how far as we’ve come as a society. (Following the link and note her reflections on lip liner. . . .) A celebrity can come out as or lesbian and still be featured in ads for a number of corporations.

(This was announced back in September and the campaign began last month.)

“Spider-man creator Stan Lee is to unveil the world’s first gay superhero.” Well, technically not the first, as there have been a number, notably Northstar, appearing in various comic books, er, graphic novels over the years.Â  But, none of them have had their own TV show as will Lee’s new character, Thom Creed.

One thing struck me when I briefly scanned an article on Madonna’s upcoming divorce from filmmaker Guy Ritchie.Â  In the couple’s joint statment, they “asked the media to “maintain respect for their family at this difficult time.”

But, as Madonna ponders her request, she needs to look in the mirror. Flaunting for the cameras helped secure her rise and keep her in the public eye.Â  It made her antics fodder for the tabloids.Â  She welcomed that as it helped her career.Â  Thus, she is largely responsible for media interest in her life which could result in the tabloids prying into her divorce.

That is, what once helped her career could now cause her personal anguish and possible embarrassment.

Media exposure is a double-edged sword.Â  If the media do indeed invade her space (so to speak) in their zeal to cover this story, Madonna has only herself to blame.

Oh man. If this isn’t the best thing I’ve seen on You Tube since The Lion King/Avenue Q video, I don’t know what is! (h/t – Instapundit)

By the way, in case you care… here’s what the lead singer of a-ha, Morten Harket, looks like today. 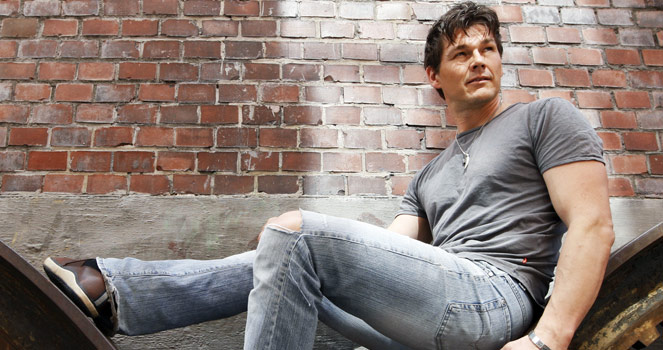 Daaaaaamn. Gimme some of that youth potion, dude!