Y’know, Al Franken never should have been in the senate anyway; he got his seat through a combination of recount shenanigans and illegal felon voting. But, whatever.

The left is continuing the time-honored tradition of smearing and shaming a woman who accused a powerful Democrat of inappropriate behavior.  Also, here. So much for the “Gee, What we excused Bill and Hillary Clinton for when they had power is no longer OK” narrative.

Women in power would solve all these sexual harassment problems, because women never sexually harass anyone and never abuse political power, right? Wrong!

Meanwhile, a university has canceled a play about the dangers of censorship because it offended… who else?… the Social Justice Wankers. The best part is the play was never even staged and the offended wankers never even read the script.

An outraged Brandeis grad took to Facebook to declare “Buyer Beware” “an overtly racist play [that] will be harmful to the student population if staged.” The alum wrote this post without having read a word of the script, and was seemingly not embarrassed by her actions. (“I don’t need to read the actual language to know what it’s about,” she told the Hoot.)

And those who did read it where mainly offended that a straight white man wrote it.

“The issue we have with it is that [Michael Weller] is an older, straight gendered, able-bodied and white man,” Child said in a phone interview with the student paper. “It isn’t his place to be stirring the pot.”

To remember the Gipper on the hundredth anniversary of his birth, I headed up earlier today to the Hollywood Walk of Fame where a blog reader joined me as we placed four red roses together with some American flags on his star.  Red is Nancy’s favorite color.

As we stood there and people passed, taking note of the flowers, they recalled that today was Ronald Wilson Reagan’s centennial.   Apparently, the news media, the heirs of those who disparaged this great man when he served as the nation’s chief executive, did their due diligence as this great day approached.

To many of us Reagan-lovers, today like a holiday.   And indeed it was, giving us another chance to commemorate the vision and accomplishments of this graceful and gallant great man. 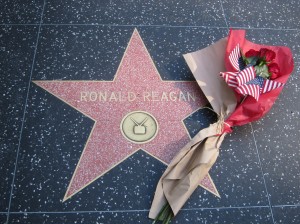 Whatever else history may say about me when I’m gone, I hope it will record that I appealed to your best hopes, not your worst fears; to your confidence rather than your doubts. My dream is that you will travel the road ahead with liberty’s lamp guiding your steps and opportunity’s arm steadying your way.

Ronald Reagan changed the trajectory of America in a way that, you know, Richard Nixon did not, and in a way that Bill Clinton did not. . . . He put us on a fundamentally different path, because the country was ready for it … he tapped into what people were already feeling, which is we want clarity, we want optimism, we want a return to that sense of dynamism, and entrepreneurship that had been missing.

As we celebrate the greatest domestic policy president of the last century, we know that our words cannot improve on his own, so let’s give a listen to his defining speech, “A Time for Choosing,” where, in making the case for Barry Goldwater’s quixotic bid of the White House, he outlined a series of principles which would define his subsequent political career:

It’s time we asked ourselves if we still know the freedoms intended for us by the Founding Fathers. James Madison said, “We base all our experiments on the capacity of mankind for self government.”

This idea? that government was beholden to the people, that it had no other source of power is still the newest, most unique idea in all the long history of man’s relation to man. This is the issue of this election: Whether we believe in our capacity for self-government or whether we abandon the American Revolution and confess that a little intellectual elite in a far-distant capital can plan our lives for us better than we can plan them ourselves.

As we celebrate  the centennial of a great man who was both graceful and gallant, I’ve been watching some of the memorial tributes offered on the DVD, Ronald Reagan: An American President, I had the chance to watch once again former Vice President Cheney’s tribute to the Gipper.

That fine man truly got the essence of the nation’s fortieth president:

“From my mother,” said President Reagan, “I learned the value of prayer. My mother told me that everything in life happened for a purpose. She said all things were part of God’s plan, even the most disheartening setbacks. And, in the end, everything worked out for the best.”

This was the Ronald Reagan who had faith, not just in his own gifts and his own future, but in the possibilities of every life. The cheerful spirit that carried him forward was more than a disposition; it was the optimism of a faithful soul who trusted in God’s purposes and knew those purposes to be right and true.

He once said “There’s no question, I am an idealist,” which is another way of saying, “I am an American.”

We usually associate that quality with youth, and yet one of the most idealistic men ever to become president was also the oldest. He excelled in professions that have left many others jaded and self- satisfied, and yet somehow remained untouched by the worst influences of fame or power. END_OF_DOCUMENT_TOKEN_TO_BE_REPLACED

“I wasn’t a great communicator, but I communicated great things, and they didn’t spring full-bloom from my brow — they came from the heart of a great nation.”

Like many fans of the greatest domestic policy president of the last century, I’ve been trying to find an appropriate way to remember/honor this great man on the centennial of his birth.

Many have written eloquently about his nature, his background, his political philosophy and his accomplishments.  Others are planning magnificent celebrations.  We here at GayPatriot are putting together a small event in Los Angeles.  E-mail me for details.

Yet, as I remember this marvelous man, two things stand one, first, his love for Nancy.  He was born good, but she made him great.  And the second thing perhaps stands out because of the times we’re in and the solutions his successor (in the White House) has proposed.  In contrast to the incumbent chief executive, Ronald Reagan knew in his heart that Americans didn’t need the heavy hand of the state to get them out of an economic mess.  Indeed, he believed that it was the heavy hand of the state which got them into that mess — and which was preventing them from finding a means of egress.

“Government,” he reminded us in his first inaugural address, ” is not the solution to the problem.  Government is the problem”:

Seems that the ideals which define the Tea Party parallel nearly perfectly those put forward so eloquently by the Great Communicator.

Ronald Reagan had great faith in his fellow Americans.  He didn’t believe in seeking solutions in Washington, D.C., but in the ingenuity of the American people, in factories in Ohio, farms in Iowa, labs in North Carolina and yes, even in garages in California.

The Gipper had confidence in the American ideal, belief in American exceptionalism and was convinced that America’s best days were ahead.  Oh, and, he had a deep and enduring love for Loyal Davis‘s little girl.