A gay man gave a speech at the Republican National Convention: The Gay Left Is Not Taking This Very Well.

The 2nd dumbest woman on Twitter is also not taking it well.

There would also be hissy fits if no gays spoke at the RNC.

For those of you not in the Twitter world, you may have missed that I picked up a new companion on Wednesday in Tampa.

I apologize to my readers for not being able to cover the RNC as planned.

I hope to do a BlogTalkRadio show from the DNC next week. It all depends on how my new friend behaves.

At this moment, I’m blogging from the Franklin Center‘s Future of Journalism Symposium. They have three sessions beginning today. The topic today is: “Transforming the Media Landscape: The Crisis and Opportunity in Journalism”.

Will runs the great website Watchdog.org which has non-profit reporters stationed in many of our state capitals.

This is a very informative panel discussing how Franklin Center came to be after many “for-profit” reporters were fired from their state capital “beats” after the 2008 recession. Franklin Center stepped up and through innovation formed a national network of reporters who are dedicated to telling the truth about the people’s government.

UPDATE: The symposium is being livestreamed at this link. 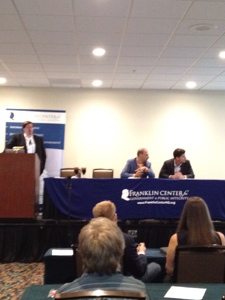 I’ve arrived in Tampa and am now blogging from an awesome panel featuring some of the most powerful women in the Conservative movement.

The format is interesting… clips demeaning Republican women are shown (many are from Bill Maher, shockingly…). Then the panelists respond to the clips and the overall insulting way the media treats Conservative women.

It is a great panel to start the convention for me. All of these women are smart and accomplished and many have had to overcome great professional and professional odds.

Kudos to the organizers of this panel. It is an important topic and very empowering to hear our strong Conservative women stand up for their values and our nation.

This was mainly an excuse to test out my new audio equipment during tonight’s stopover in Tampa.

Yeah, I’m going to re-re-relaunch the BlogTalkRadio show, GayPatriot’s America, tonight. The topic tonight will be a preview of the 2012 Republican National Convention.

I’m pleased to have a special guest, Zac Moffatt who is the Digital Media Director for the Romney Presidential campaign. Zac will be calling in about 9:05PM ET.

At 9:30PM, my next guest Sarah Rumpf will join me. Sarah blogs at www.sunshinestatesarah.com and can be found on Twitter at @rumpfshaker. Sarah is a Florida native and we will compare notes about Tampa and the RNC.

The GayPatriot’s America radio show begins at 9PM and I’ll talk about my pending trip to Tampa where I’ll be covering the RNC on the ground.

UPDATE: The show is available on iTunes.  Also, you can listen via the player right below!

When I first read Scott Tucker’s post on Dan Savage’s appearance Joe Solmonese’s on XM Satellite Radio show, I took note of the sex columnist’s narrow view of the GOP:

[He] is so filled with animosity against Republicans, he can’t see the world in front of him. And like so many anti-Republican gay activists, he can’t provide facts to justify his (very distorted) view of the GOP.

But, now I wonder why the president of the Human Rights Campaign, which bills itself as an organization which strives “to end discrimination against GLBT citizens,” invite a writer with a record of anti-Republican rhetoric, to comment on the Republican National Convention.

Shouldn’t he have invited a less partisan participant? Or perhaps included a gay Republican, say Log Cabin President Patrick Sammon, along with Savage, to offer his view of the festivities in St. Paul?

Wouldn’t the perspective of the president of a gay Republican organization, one which refused to back the GOP nominee four years ago, be a more credible source for information on his party’s convention?

Scott Tucker does a great job of pointing out Savage’s lies and misrepresentations.  Read his post!  And once you have, ask yourself this: what does it say about Joe Solmonese that he would invite this anti-Republican writer to comment on the Republican convention?

It’s akin to inviting James Dobson to comment on the gathering of a gay group.

. . . than to be conservative among gays.

The Washington Blade asked me to blog about my experience in St. Paul and published the column today. To whet your appetite, I give you the first three paragraphs:

JUST OVER TWO years ago in the Huffington Post, left-wing journalist and screenwriter Gene Stone asked why â€œany gay man or womanâ€ would join the GOP, â€œa party that has stated, over and over, as clearly as can be, without equivocation, that he or she is not welcome.â€ Stone’s piece was little more than an angry and inaccurate diatribe, attempting to show that it was â€œworse than self-loathing,â€ it was â€œjust plain moronicâ€ for gay people to embrace the Republican Party.

His article, like so much of the criticism leveled against gay Republicans, did not reference any specific action by the GOP excluding gays. He didn’t even identify any actual gay or lesbian individuals who had had adverse experiences with the Party of Lincoln.

Familiar with such ill-informed attacks on gay Republicans like myself, I decided last week that when I went to the Republican National Convention in St. Paul, I would make a point of referencing my blog, GayPatriot, whenever I introduced myself to a participant. As the blog is part of Pajamas Media, a consortium of mostly right-of-center web sites, I would interact with a great variety of conservative (and libertarian) bloggers covering the convention.

UPDATE:  Well, to show how much easier it is to be a gay person among conservatives than to be a Republican among gay activists, check out Scott Tucker’s post on blogcabin.net “fisking” Dan Savage’s impression of the convention.  That sex columnist is so filled with animosity against Republicans, he can’t see the world in front of him.  And like so many anti-Republican gay activists, he can’t provide facts to justify his (very distorted) view of the GOP.

The day before I left for the Republican National Convention, I advised the GOP to avoid gay issues in St. Paul. Once there, my impression was that they heeded my advice. (Maybe folks at the RNC read this blog.  🙂 ) Or merely that I had a similar notion to that of some sage political strategist advising the RNC.

Seems I’m not the only one who noticed this. In a column today in the Wall Street Journal, Jamie Kirchick writes that gay-bashing was “absent from last week’s Republican gabfest.” Kudos to Jamie for taking the time to do the research to confirm my observation that “that gays were not part of the agenda this year:”

Indeed, the only speaker to make mention of them was the former Arkansas governor and Baptist preacher Mike Huckabee, and he did so only tangentially, stating that Mr. McCain “doesn’t want to change the very definition of marriage from what it has always meant throughout recorded human history.” (The same, of course, could be said of the supposedly gay-friendly Barack Obama, who also opposes marriage equality for gay couples).

I’m delighted that at least four readers e-mailed me alerting me to this excellent article, with one commenting, “Looks like you got your wish…”

Peg Kaplan linked the article on her own blog, saying, “About time.”

My friend Rick Sincere, linking the post on his own blog, attributes the Republican silence to a generational shift:

One would hope, given the polling data cited above and other public opinion surveys of recent years — as well as considerable anecdotal evidence — that as a younger generation of Republicans, who grew up with gay friends and who look toward Barry Goldwater and Ronald Reagan as the historical figures who best exemplify Republican principles, begin to gain control of the party’s resources and its future platforms, this live-and-let-live philosophy will reassert itself in the Grand Old Party.

I have long believed that the Republican Party is better for gay people than the Democratic provided it stay true to its principles. The Democrats (and others on the left) would have us believe we need the state to promote social change. We believe that the state should just get out of the way so as not to prevent social change from happening organically.

As most polls shows John McCain edging into the lead over Barack Obama following the successful GOP Convention in St. Paul, John Hinderaker sums it up:

Obama will have the edge when voters are learning about the campaign from newspapers, magazines or television, and McCain will have the advantage when voters actually see the candidates perform. The debates will therefore be critical, but, this year at least, no more so than the parties’ conventions.