I swear the Romney/Ryan campaign is paying attention to what the conservative bloggers are talking about.  I remember watching John McCain in 2008 and screaming at the TV something like — “Hey you idiot… why didn’t you bring up [this topic] — it is all the blogs are talking about!”

Now during each debate this year, I scream something like – “Mitt must be reading my Twitter timeline!  He knew that [non-covered MSM fact or story].”

Last night I had a number of moments, but one was most important.  Many of us in the conservative blogosphere have been contrasting the Obama “Recoversession” to the actual Reagan Recovery.  It is a tale of stagnant growth and meager employment versus robust quarterly growth and the fastest job growth in post-WWII America.

Romney laid it out last night and I cheered at my TV.  Glenn Reynolds has a great graphic this morning at Instapundit that further illustrates the stark (and I mean damned-ass stark) contrast between Obama and Reagan on economic recovery.  If these are the “three decades of problems in our economy” that Obama whines he inherited — please bring more!

Tonight, I’ll be joining a group of our readers in Century City, just a stone’s throw from where Ronald Reagan declared victory in the 1980 presidential election, to celebrate my co-blogger’s birthday.

If you’d like to join us tonight, please e-mail me to RSVP — and for details.

Odd comparison. I mean, the two men sure did have a different reelection strategy.

Yesterday, Jennifer Rubin began her must-read post, Is the liberal echo chamber a trap?, quoting one of the Gipper’s favorite sayings, “It isn’t so much that liberals are ignorant. It’s just that they know so many things that aren’t so.”

“There is”, she observes,

. . . no better phrase than that to describe President Obama, hermetically sealed in leftist bubble to a greater extent than any Democratic president in history. He doesn’t imagine that there are facts or interpretations that lead his opponents to opposite conclusions. He therefore assumes they are dimwits or liars.

Liberals like Obama believe that a Keynesian “stimulus” must work because that’s what they’ve been taught in college and heard repeated by liberal politicians and policy wonks.  No matter that such stimuli, while working well on paper, tend to work as well in the real world.  (See, e.g,. our recent guest post.)

The liberal worldview notwithstanding, the New Deal did not lift the nation out of the Depression, indeed, FDR’s big-government agenda prolonged it.  Japan’s lost decade wasn’t lost because of spending cuts and regulatory relief.  And Obama’s “stimulus” may well have delayed our recovery from the most recent recession.

And then, there are things which liberals should know about the economy, but don’t — because it doesn’t fit their narrative.  The economy rebounded in the 1980s despite the Gipper’s failure to offer a government “stimulus” and continued to grow in the 1990s despite the successful Republican filibuster of Bill Clinton’s “stimulus.”

Obama refuses to confront these facts, repeating instead his nostrum about Mitt Romney wanting to return us to the failed policies of the past.  Given that Romney’s economic agenda more closely resembles Ronald Reagan’s than it does George W. Bush’s, it would be correct to say that the Republican nominee wants to return to the successful policies of the past. END_OF_DOCUMENT_TOKEN_TO_BE_REPLACED

Asking whether “Incurable Optimism” is A Genetic Trait, Glenn Reynolds quips, “IF SO, MAYBE IT REALLY IS INCURABLE“.  Ronald Reagan too thought optimism was incurable as manifested by his delight in  repeating the story about the man who had two sons, one an incurable optimist, the other an incurable pessimist.

As I recall when I heard Paul Ryan speak at the sacred shrine of freedom Reagan Library, he offered the optimistic son’s concluding comment, expressing his certainty that there just had to be a pony in that pile of horse manure.

Methinks that’s one thing which makes the fetching Wisconsin Republican such a compelling candidate; he knows the Gipper’s tales and shares his optimism.

Yes, optimism does seem to be incurable.   And it does seem more Republicans than Democrats share this affliction with the Gipper — and with Mr. Ryan. 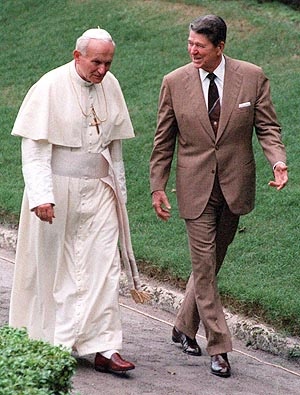 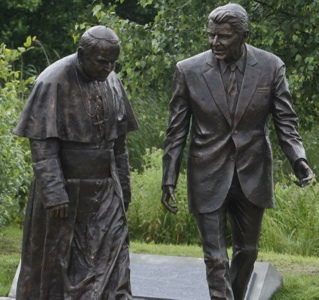 Although Bruce and I have different styles and do put different spins on things, it is often uncanny how certain issues strike us simultaneously.  Just as I was beginning a post on the jobs numbers, linking a piece by the American Enterprise Institute’s (AEI) James Pethokoukis, I find that Bruce had just posted on the numbers linking a piece by that very AEI blogger.

Bruce concludes his post contrasting the robust Reagan recovery with its anemic Obama counterpart.  In the Pethothoukis post I caught, the blogger provided the details of that contrast:

Read the whole thing!  Via Glenn Reynolds who was one of many conservative and libertarian bloggers who linked the above, referencing that post in one of his two roundups on the job numbers, the other here.

Lots of good stuff in both detailing just how bad this recovery is — and explaining why.

FROM THE COMMENTS:  Rattlesnake asks, “How much did Reagan spend for each of those jobs that were created under his watch?” END_OF_DOCUMENT_TOKEN_TO_BE_REPLACED

In the National Review last week, Deroy Murdock used the occasion of gay activists advertising their juvenile mockery of the most successful domestic policy president of the last century at the White House to debunk gay left lies about that great man.

Murdock reminds us that Ronald Reagan opposed the Briggs Amendment, “a ballot initiative that would have dismissed California teachers who ‘advocated’ homosexuality“, writing in his “his nationally syndicated newspaper column” that “homosexuality is not a contagious disease like the measles. Prevailing scientific opinion is that an individual’s sexuality is determined at a very early age and that a child’s teachers do not really influence this.”

And this in 1978 when popular opinion, to borrow an expression, had not yet evolved on the issue.

Not just that. The Gipper was not, as some activists have alleged, indifferent to the AIDS epidemic.  To the contrary, he “signed $5.73 billion in U.S.-government anti-AIDS outlays” — or, ” $10.6 billion in today’s dollars.” Deroy calculates that the “average annual increase in federal expenditures on HIV/AIDS under Reagan was 128.92 percent.

And the Gipper may well have been the first U.S. President to openly host an openly gay man — and his partner — in the White House.  According to a March 18, 1984 story from the Washington Post: “Ted Graber, who oversaw the redecoration of the White House, spent a night in the Reagans’ private White House quarters with his male lover, Archie Case, when they came to Washington for Nancy Reagan’s 60th birthday party — a fact confirmed for the press by Mrs. Reagan’s press secretary.” END_OF_DOCUMENT_TOKEN_TO_BE_REPLACED

Bruce and I are both of the Reagan generation; we came of age in the 1980s.  Like a majority of those born in the 1960s and early 1970s, our enthusiasm for the nation’s president grew as his days in office lengthened.  The Gipper left office well loved by the twentysomethings of his day.

As I wrote last April:

My generation warmed to the Gipper not as much when he was a candidate as when he was president.  We loved him more in 1984 than we did in 1980.  Once in office, he gave us hope that we would find jobs and have a better future.   Obama, by contrast, gave us hope that his administration would be different from that of his predecessor, but once in office, the enthusiasm of his young followers began to wane.

In the four years since President Obama swept into office in large part with the support of a vast army of young people, a new corps of men and women have come of voting age with views shaped largely by the recession. And unlike their counterparts in the millennial generation who showed high levels of enthusiasm for Mr. Obama at this point in 2008, the nation’s first-time voters are less enthusiastic about him, are significantly more likely to identify as conservative and cite a growing lack of faith in government in general, according to interviews, experts and recent polls. END_OF_DOCUMENT_TOKEN_TO_BE_REPLACED

“What Happens,” asks Victor Fiorello of the Philly Post, “When You Let Gay Philly Activists Into the White House”?

They pose for pics giving Ronald Reagan’s portait the finger.

Guess they forgot about the ads that good man cut to oppose the anti-gay Briggs Amendment.

What a great way to create an image of gay people as responsible adults.  Via Weekly Standard via Drudge.