The progressive left seems to have started a crusade to abolish football. Check out the new cover from that news pamphlet you sometimes see in the doctor’s office.  And this comes after the left-wing media’s long crusade against the name of the Washington Redskins (if your outrage meter doesn’t peg 11 on the “Redskins” name, that means you’re a racist) and more attacking the NFL as a culture that encourages domestic violence. (Curiously, despite a whole lot of domestic violence in the Entertainment industry, there is no leftist crusade against “Hollywood Culture.)

I have been wondering why the left hates football. I have a few theories.

What are your theories?

I bet Oprah Winfrey didn’t foresee the TV movie ending like this.

It’s amazing how many of these media-hyped “historic firsts” turn out not to be up to the job.

Update: A little tantrum from the lefties at Mother Jones: Michael Sam, Who Is Better At Football Than You Will Ever Be At Anything, Has Been Cut By the Rams . Kind of ironic that Sam is the gay dude, but it’s the liberal media who are all butthurt. 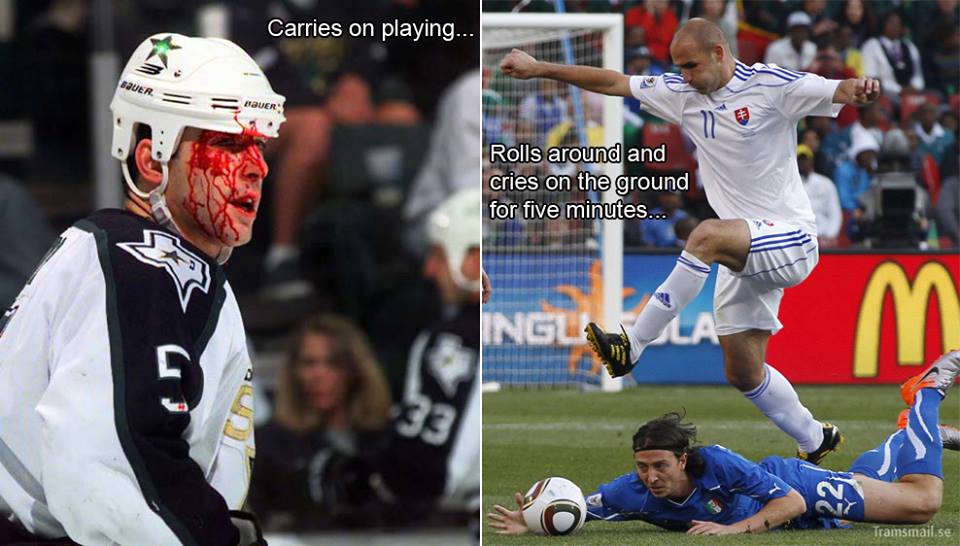 I get why soccer is the perfect sport for liberals. You win by pitching a crying fit over the slightest injury so that an official will penalize the other team. That’s what liberalism basically is.

Once you get past the silliness of playing hockey (or as Europeans call it… “Ice Football”) in June, or that LA even has a hockey team….  Stanley Cup two-fers are pretty neat. 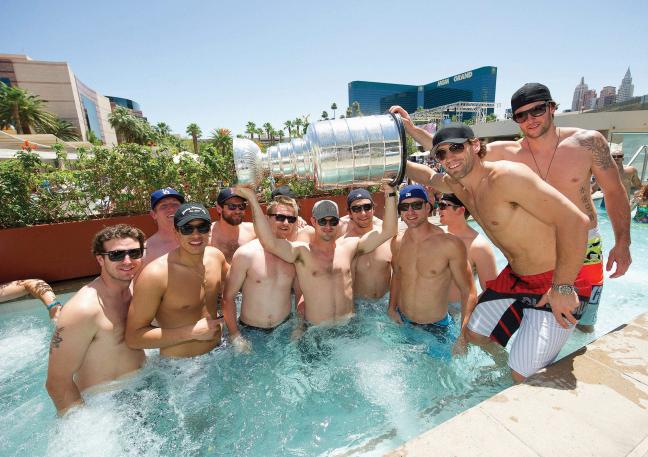 I don’t follow basketball save to root for the Lakers when I catch them on a TV I’m watching at the gym. (One of my best friends is a fan, so I root for the LA team, knowing their victory will help make her day.)

Until this week, I had never heard of Jason Collins, and assume the 34-year-old center must be a good basketball player, given that he been playing professionally for “12 seasons“, including once “in a Final Four for Stanford and” twice in the “NBA Finals.”

As usual when someone in the public eye out, you can expect overblown rhetoric for the various gay advocacy outfits with Aaron McQuade, the head of GLAAD’s sports program, saying that Collins had put “courage” and “inspiration” into “a brand new context.”

Talking about Collins’s call a few days ago “to share the news with” him, Boston Celtics player and (the Collins’s former) coach said:

When he called me to tell me, you could tell he wanted to tell me. I told him before he said it, ‘Jason I could care less about what you’re about to tell me.’ And that’s how I feel. I honestly feel that way.

It’s a non-factor to me, and I know it is a factor to a lot of people. I’ve never understood why anyone cares what someone else does. And I told Jason that it will be a non-issue eventually, but it will not be right now.

Leave it to an athlete to say it better than a professional gay advocate.  It’s not an non-issue now because Collins is the first professional athlete to come up while still playing.  But, it should be one.  The coach is right to note that no one should really care about an athlete’s sexuality.  It’s as irrelevant to his performance as his hair color.

No wonder Bruce Bawer urges Collins to “say no” to the gay outfits who want to make him their “spokesrobot.”*  Don’t let him fall into spouting the same kind of bromides as Mr. McQuade offered. END_OF_DOCUMENT_TOKEN_TO_BE_REPLACED

To follow up on my post of a couple weeks ago on gay athletes in the 21st century, these news items may be of interest.

First, NBA center Jason Collins comes out. Interestingly, he has a twin who is straight. (Studies show that identical twins are somewhat likely, but far from guaranteed, to have the same orientation.) His article has a few odd political shots in it; I wonder if they come from his co-writer?

Next, kicker Alan Gendreau didn’t get drafted. But not many kickers are drafted, so that may be small news. Gendreau was the first openly-gay player to enter the NFL draft. The Newsbusters article (hat tip Peter H) mentions ABC News’ role in having publicized Gendreau for reasons of political advocacy.

UPDATE: Caught a few minutes of Rush, who predicts that the NFL will soon come out with at least two gay players… because they have to trump the NBA.

I hope he’s right. I mean, can we please get the coming-out-in-sports process over with? Like I said in my earlier post, in 1993 or 2003 I cared about celebrities’ “brave personal journeys” in coming out, but it’s 2013 now. The sooner done and forgotten, the better.

I’m late in getting to this, but last week on NBC’s Today, Matt Lauer said:

It’s interesting that in 2013, with attitudes towards homosexuality changing so dramatically in this country, there isn’t a single major athlete in a major professional sport playing right now who has come out and said, ‘I’m gay.’ Why is that?…

I have a possible answer, and a new question.

My answer is: For much the same reason that straight athletes don’t come out and say “I’m straight.” It’s irrelevant. Not every activity or field is one where the customers (spectators) need any information about the producers’ (athletes’) personal lives.

Part of what we love about athletes is their focus on something wonderfully beyond themselves: which is the sport, the game, the discipline it takes to be a winning athlete. Call me crazy, but I find it distasteful when any athlete, gay or straight, insists on my knowing whom they ‘like’ or are dating. I only care about their dedication to (and success with) their sport.

Which brings me to my question: why, in 2013, would Lauer think this is important? This isn’t the 1980s, wherein gays had to battle sodomy laws, or the total absence of gay-straight alliances at schools, or certain professional bans. Today we even have States scrambling to support gay marriage. Lauer’s question itself assumes there are lots of gay pro athletes – so, no real job discrimination.

I must admit that I thought like Lauer did in, say, 1993. Some years later, I came into the 21st century. Join me, Matt!

President Obama thinks the bad actions of a few individuals in Penn State’s football program is some kind of national crisis requiring the “entire country to do some soul-searching“:

President Obama called for the nation to do some “soul searching” in the wake of a scandal at Penn State University that led to the firing of longtime coach Joe Paterno after it was revealed one of his assistants allegedly sexually abused eight boys and the team did little to stop it.

“Obviously what happened was heartbreaking, especially for the victims, the young people who got affected by these alleged assaults,” he told Westwood One Radio in a Friday night interview, making his first public comments on the scandal.

“And I think it’s a good time for the entire country to do some soul-searching — not just Penn State. People care about sports, it’s important to us, but our No. 1 priority has to be protecting our kids. And every institution has to examine how they operate, and every individual has to take responsibility for making sure that our kids are protected.”

One assistant coach behaved very, very badly and should be locked up for the rest of his life. And those who knew and did not report this matter to authorities also deserve censure (at minimum) and perhaps punishment (depending on the laws in the Keystone State).

But, why must all Americans engage in soul-searching for a handful of individual bad actors?  Is it this liberal mentality makes social problems of individual crimes?

This is a very revealing comment about the president’s mentality.  He would have been better served to respond as did Pennsylvania’s junior senator.  By all accounts, Joe Paterno was a first rate coach who handled this situation in a, well, less than professional manner.

Because this matter has received such prominence, perhaps it is appropriate for the president to comment, but to fault those at fault and express the disgust most Americans feel at the charges, but we’re not the bad actors here.  And we don’t need engage in soul-searching for misdeeds we haven’t committed.

In a shocking turn of events, Speaker of the House Nancy Pelosi (D-CA) reversed the results of the second round Kansas vs. Northern Iowa NCAA tournament game by deeming the Jayhawks to have passed to the next round.

“I like the procedure, because you don’t have to win the game,” Pelosi said.

Pelosi was reacting to Northern Iowa’s upset of the number one seed overall Kansas, which President Obama had picked to win March Madness.

“There will be no busted Barack-ets this year,” Pelosi said, as she made her way out of the Capital en route to a plastic surgery appointment.

“This kind of thing helps Barack get on with his legislative strategy when the Republican Party of No is just trying to defeat him and win the pick em game.”

Sen. Chuck Grassley, Republican of Iowa, said that he was going to filibuster Kansas’ win.=

It was heartbreaking to watch the Georgian athletes walk into the Olympic Stadium.  Every other nation was cheering, jumping up and down and soaking in the excitement.  But the Georgians were in mourning for the loss of their comrade-in-sports, Nodar Kumaritashvili, who died yesterday morning in a training run on the luge course.

I just wanted to take a moment to express my sorrow to all those who knew Nodar and his family.  And condolences to all those Olympians who were struck by the tragedy yesterday.

It is sad that the World had to come together last night under a cloud of darkness, but I was cheered by how brave the Georgian delegation was as they strode into the stadium with 60,000 people encouraging them to continue on with their dreams.